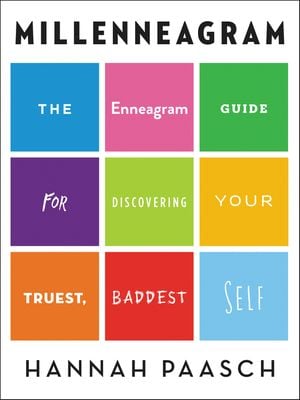 Several years ago, I began learning about the Enneagram, which is—depending on your perspective—either the latest passing fad in personality tests or a vital tool for self-discovery and spiritual growth.

I started in the first category, as a skeptic, and then moved to the second as the Enneagram slowly won me over.

In case you’ve been living under a rock, the Enneagram sorts the human race into nine basic personality types—ennea is the Greek word for nine—and further variations within those nine types.

From the standpoint of what’s going on in American religion today, it’s those variations that are catching my attention.

There are three “instinctual variants” within each type (self-preservation, social, and sexual), meaning there are really 27 basic types, as Beatrice Chestnut makes clear in her book The Complete Enneagram: 27 Paths to Greater Self-Knowledge.

For example, maybe you are a Two with a “social” variant. Twos are already the therapy dogs of the Enneagram, defaulting to love love love in a way that other types find baffling. But social Twos take that to a whole new level, working the room and knowing everything there is to know about everyone at the party.

Then there are the “wings”—the numbers on either side of your core number. Most Enneagram teachers say you’ll be influenced by the traits of (at least) one of those two numbers. For example, I think a friend of mine is a 5w6, which means she has all the nerdy and introverted intellectualism of the 5 type with a shade of the anxiety that comes courtesy of her 6 wing. It’s a super fun combo, let me tell you.

With the wings and the instinctual variants in mind, that gives us 54 types—27 who prefer the wing on their left, and 27 who gravitate toward the wing on their right. What’s more, if we follow the teachers who believe some people are bi-winged, with equal access to both of the numbers on either side of their own, that makes for another 27 types, or 81 in all. And possibly more.

Are you confused yet?

In a way, you should be. That’s kind of the point.

The recent runaway success of the Enneagram among young American Christians can be attributed at least in part to a logical backlash we should have seen coming. Church leaders have been trotting out the same strategies in the same ways with a new generation of very different people who have been trained since birth to expect customization to their individual tastes—and then been surprised when Millennials don’t appear to want what the church is selling.

Consider what Hannah Paasch, author of the sharp and acerbic new book Millenneagram: The Enneagram Guide to Discovering Your Truest, Baddest Self has to say about how the Enneagram helped her to heal from her childhood in the evangelical church. It’s worth quoting at length because what she says here could be the anthem for a generation.

“I know this is hard to believe for those of us coming from conservative, evangelical, or patriarchal cultures—ya know, those button-the-top-button kinda folks—but anything you have to force is not right or healthy or good. You should not have to force wholeness. Positive change should not look like white knuckles. It shouldn’t look like repression. It shouldn’t look like stifling or coping or self-flagellation. All of that behavior modification does nothing to actually change you long-term. All it does is mold you in the likeness of whatever deity the powers that be have constructed . . . .

The Enneagram was a huge part of my own healing. As you can tell, the church I grew up in left some scars, and it was ultimately the Enneagram that gave me a path to becoming the best person I could be in a way my religion just couldn’t.

When I was growing up in the church, there was this word they talked about a lot about from the pulpit that meant ‘getting better,’ and that word was ‘sanctification.’ This word drove me nuts because I wanted to ‘get better,’ but the definition was vague as fuck: the only kind of answers I could get out of anybody were to be more ‘Christ-like’ or practice the ‘fruits of the spirit,’ which basically meant ‘kindness’ and ‘joy’ and ‘peace.’ These are easy to talk about and a fuck-ton harder to attain.

My question was always ‘How do I PERSONALLY get there?’ With the Enneagram’s path to integration, I now feel like there’s hope for my garbage ass. It’s hard work, but I can become a kinder person. A more joyful person. A better person.” (221–222*)

(Oh, yeah, I should have told you: there are a lot of swears.)

What Paasch is saying here is that the one-size-fits-all Christianity of her childhood, which expected her to remold herself in the likeness of “whatever deity the powers that be have constructed,” was toxic and stifling.

What has pointed the way for her is, ironically, having the chaos of 81+ personality types. Where traditional religion “just couldn’t” provide a specific individual path, the Enneagram could. And the way forward for her as an artsy, melancholic Four who seems to have a sexual variant (she switches to the first person plural in that section, so I’m just assuming) is going to look very, very different than if she were, say, a sunny Seven who tended to shut down her negative feelings, like the character of Joy in the movie Inside Out.

While Paasch thinks growth is important, she also wants us to know that who we are already is FINE, thank you very much. Cue the music for “This Is Me” from The Greatest Showman when you read this part:

“Kids, listen up. If you’re using, or want to use, the Enneagram for spiritual development, GREAT. I believe it can be a tool to deepen you, center you, and connect you to spiritual realities. But for many of us—the upstart activists, the queer kids, the visionaries and bohemians, the world changers—this whole system is about seeing our true selves and celebrating whoever the fuck that turns out to be.

If older Christians read this manifesto and roll their eyes, if they think that infinite customization is antithetical to the core tenets of the gospel, I ask them to consider this:

Millennials didn’t invent, or even popularize, the personal musical playlist of the iPod. Y’all did. Millennials weren’t even buying their own burritos back when Chipotle pioneered the concept that people could choose only the things they liked and not have to pick off any of the things they didn’t want but that came with each order automatically. You folks made that happen by voting with your feet and with your checkbooks, back when checkbooks were still a thing. So, thank you.

And also: What have you got to offer in the way of attending to the “personal” part of “personal relationship with Jesus Christ”?

Related posts: Or, what kind of Enneagram One would I be if I didn’t provide you with a thorough list of RNS’s other articles about the Enneagram, even though you didn’t ask for it? You’re welcome.

What is the Enneagram, and why are Christians suddenly so enamored by it?

Faith
When she doesn’t want a baby