(RNS) — There has been a lot of clerical hand-wringing of late about Catholics who don’t believe what the church teaches about Christ’s presence in the bread and wine of the Eucharist. According to the Pew Research Center, only one-third of Catholics agree that the Eucharist is the body and blood of Christ. Almost 70 percent believe that during Mass, the bread and wine used in Communion “are symbols of the body and blood of Jesus Christ.”

This certainly shows a failure in catechetics, but I think the church faces a greater problem: Like the Pew Research Center, Catholics have an impoverished idea of what the Eucharist is really all about.

Much of Eucharistic theology — especially the Catholic teaching of transubstantiation — goes back to the 13th century, when people rarely received Communion at Mass. They went to church to adore Christ present in the Eucharist, and the purpose of Mass was to transform the host into the body of Christ so that people could adore him. Devotionally, the Mass was not all that different from Benediction, where the Eucharist is placed in a monstrance to be adored by Catholics.

In order to explain how what looked like bread could be the body of Christ, 13th-century theologians used the avant-garde thinking of the time: Aristotelianism.

In ancient Greece, Aristotle described reality using concepts of prime matter, substantial forms, substance and accidents. This allowed Catholic theologians using Aristotelian philosophy to explain that the “substance” of the bread was changed into the body of Christ while the “accidents” (appearance) remained the same. Thus, “transubstantiation.”

Using Aristotelian concepts to explain Catholic mysteries in the 21st century is a fool’s errand. When was the last time you met an Aristotelian outside a Catholic seminary? 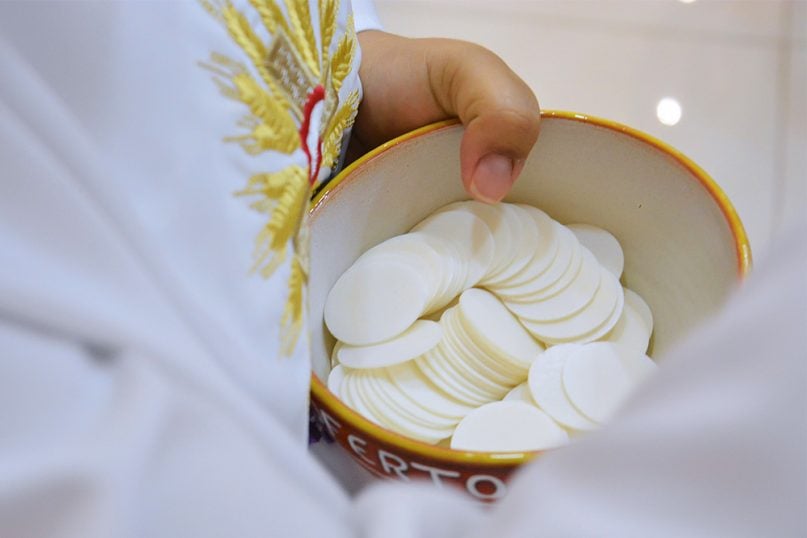 A priest offers Communion. Photo by by Lininha_bs/Creative Commons

I personally find the theology of transubstantiation unintelligible, not because I don’t believe that the bread and wine become the body and blood of Christ, but because I do not believe in prime matter, substantial forms, substance and accidents. I don’t think we have a clue what Jesus meant when he said, “This is my body.” I think we should humbly accept it as a mystery and not pretend we understand it.

In any case, Jesus did not say, “This is my body. Adore me.” He said, “Take and eat. This is my body.” Only in the early 20th century, with the encouragement of Pope Pius X, did receiving Communion again become common in the Catholic Church.

The church also spoke of the Eucharist as making present and effective the sacrifice of Christ on the cross. But even here, the concept of sacrifice was quite limited. Only in a holocaust sacrifice was everything burnt. In most Hebrew sacrifices, some of what was sacrificed was eaten in order to show God’s communion with his people.

At the 2005 synod of bishops on the Eucharist, the bishops were arguing about whether the Eucharist is a sacrifice or a communion. Pope Benedict had to intervene and explain to the bishops that it was both, something the bishops should have learned in their first course on sacramental theology.

The context of the Last Supper is also essential to understand what Jesus was instituting. The Last Supper was a Passover meal where Jews remember the Exodus and thank God for his gracious acts toward his people. Here they also renew their covenant with God. 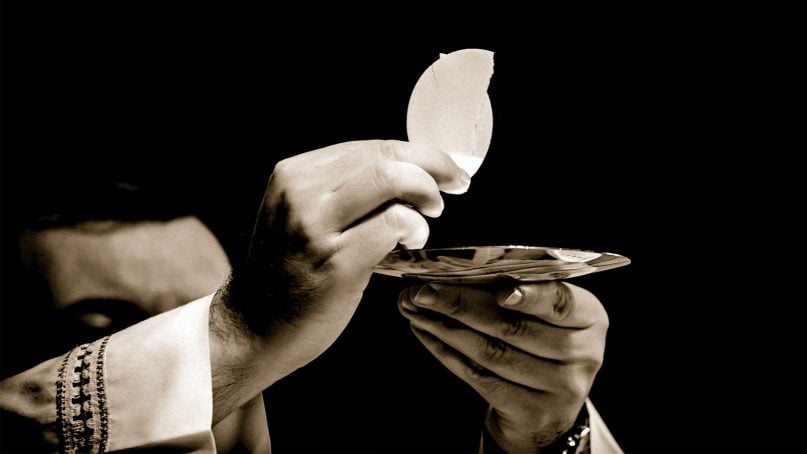 A priest holds up the host. Photo by Robert Cheaib/Creative Commons

The Mass must therefore be seen as a sacrificial meal where we give thanks to God, especially for the gift of his son; where we renew the new covenant with him; and where we are united with him through Christ.

The Mass is not about adoring Jesus or even praying to Jesus. In the Eucharistic prayer said by the priest at Mass, we pray to the Father through, with and in Christ. We give thanks and praise to God for his wondrous deeds, especially for raising up Jesus as our savior.

The Mass renews the covenant that commits us to follow in Christ’s footsteps in loving our brothers and sisters, especially the poor and the marginalized. The Eucharist is about making us more Christ-like so that we can continue his mission of establishing the kingdom of God, of bringing justice and peace to the world.

News
For many who lost loved ones to COVID-19, this Day of the Dead will be a time of healing
Signs of the Times
With 9 new electors, Pope Francis remakes the college of cardinals
Signs of the Times
Six things you need to know about Pope Francis and gay civil unions
News
Amy Coney Barrett nomination fight leaves progressive Catholics feeling unseen
Signs of the Times
Election checklist: Five ways Catholic parishes can keep politics out of church
© Copyright 2020, Religion News Service. All rights reserved. Use of and/or registration on any portion of this site constitutes acceptance of our User Agreement and Privacy Policy, Privacy Statement and Cookie Notice. The material on this site may not be reproduced, distributed, transmitted, cached or otherwise used, except with the prior written permission of Religion News Service.