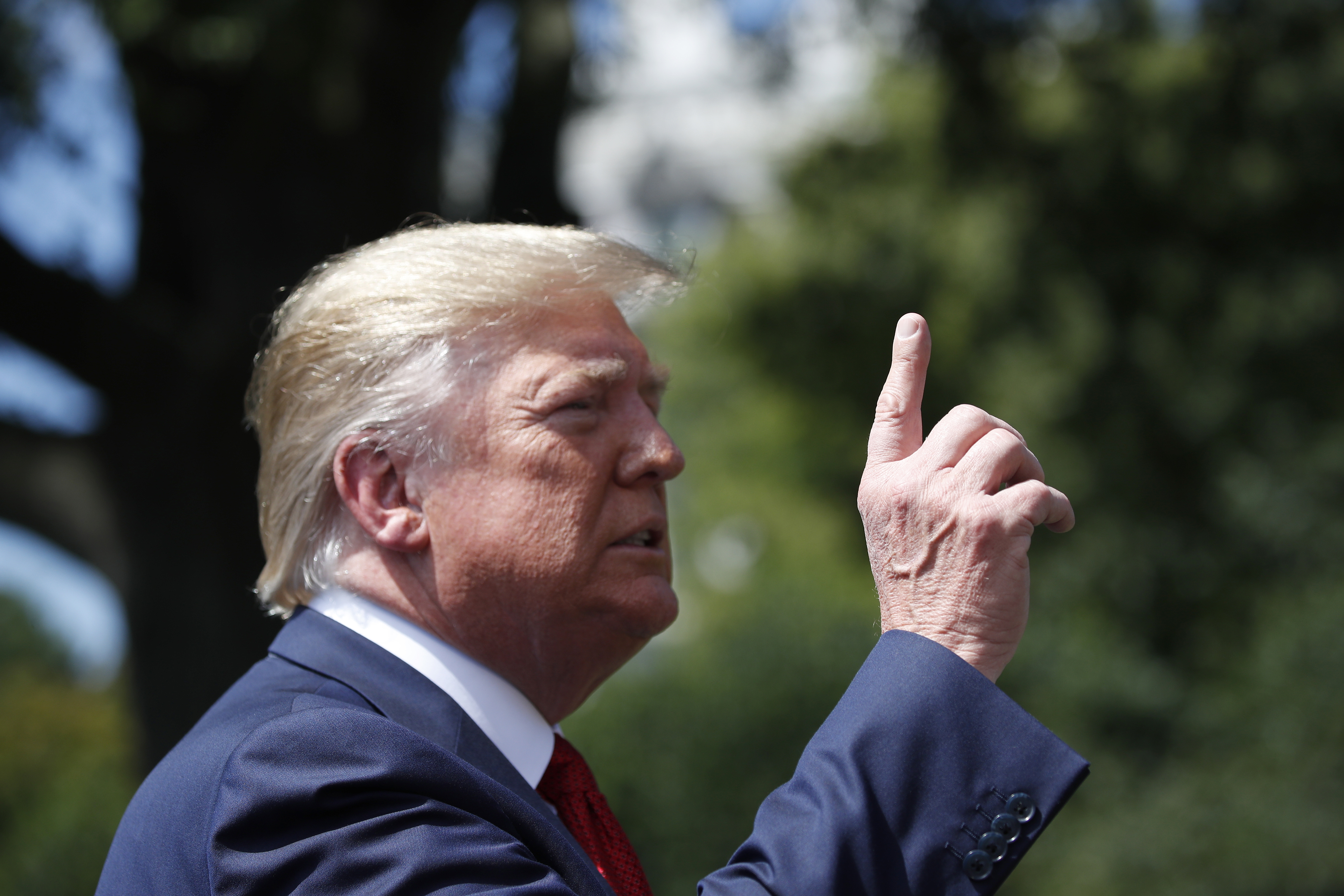 President Donald Trump speaks with reporters before departing on Marine One on the South Lawn of the White House, on Aug. 21, 2019, in Washington. (AP Photo/Alex Brandon)
August 23, 2019
Jeffrey Salkin

You can keep your GPS. Give me a good map, anyday.

Like, for example, the Catalan Atlas. It is one of the greatest maps in history, and one of the treasures of medieval Spanish Jewry, created by Abraham Cresques in 1375.

Before Cresques, when mapmakers did not know what lay beyond their worldview, they would draw dragons and sea serpents.

Abraham Cresques decided to leave those spaces blank, and in place of the monsters, he wrote two Latin words – terra incognita – unknown territory.

American Jews are now in terra incognita. The political situation in which we find ourselves is utterly without precedent in this country.

An American president has said: “If you vote for a Democrat, you’re being disloyal to Jewish people and very disloyal to Israel.”

France, 1806. Napoleon convened the Grand Sanhedrin, the assembly of Jewish notables in France. He asked them a series of questions about their Jewish identity.

The biggest question was this one.

The Jews answered “yes” to that question. With that affirmative answer, the Jews became citizens of France. Not only France; they showed that they could become citizens of all of the newly-emerging states in which they found themselves.

Why is the United States of America unique?

It was the first country in the world in which Jews did not have ask for, beg for, or bargain for their rights as citizens.

In 1915, Justice Louis Brandeis wrote these words -- about how Jews could simultaneously be proud Zionists and proud Americans.

The Jewish spirit, the product of our religion and experiences, is essentially modern and essentially American. Not since the destruction of the Temple have the Jews in spirit and in ideals been so fully in harmony with the noblest aspirations of the county in which they lived...Let no American imagine that Zionism is inconsistent with patriotism. Multiple loyalties are objectionable only if they are inconsistent.

This is why Donald Trump is wrong, and dangerously so.

First: while American Jews are emotionally and spiritually loyal to Israel, we are politically loyal to the United States of America.

For the president to suggest otherwise is nothing less than a political dog whistle.

He is channeling Pat Buchanan – who often spoke of Israel’s “amen corner” in the United States. He did not say the word Jew. He did not have to.

Second: American Jews are not politically loyal to the state of Israel, and for the president to suggest that we should be – is scandalous.

The president is defining Jewish identity.

The basic meaning of Zionism is that Jews define themselves as a people, and to let no one else make those definitions and assumptions for us.

Third: American Jews neither want nor need anyone to tell us how to vote, and to define our voting patterns as the way that we define ourselves as loyal Jews.

An American Jew, loyal to Jewish history, to the Jewish people and to Judaism, and emotionally and spiritually loyal to Israel, can vote Democrat, or Republican.

To say that the Democratic Party has turned against Israel is a libel.

How many Democratic congresspeople serve in the House of Representatives?

How many have made critical, hateful, and offensive comments about Israel?

What percentage is that?

You call this a pattern?

It is time for us to re-learn the lessons of Jewish history.

The same nation that gave Jews their rights conspired to take them away.

Alfred Dreyfus was accused of treason – of gross disloyalty to France. There were crowds in the streets, screaming: “Death to the Jews!”

A journalist was in Paris to cover the Dreyfus trial. He heard the screams of the mobs. He concluded that there was no future for the Jew of Europe, because the Jews would always be considered a foreign element.

That journalist was Theodor Herzl.

Zionism as a political movement emerged from our desire -- to quote Blanche Dubois in "A Streetcar Named Desire" -- "to not have to rely on the kindness of strangers."

What have we witnessed in recent days?

To quote the late David Bowie: "This is not America."

What is America? To what should Americans be loyal?

To the words that President Washington addressed to the Jews of Newport -- August 21, 1790:

For happily the Government of the United States, which gives to bigotry no sanction, to persecution no assistance requires only that they who live under its protection should demean themselves as good citizens, in giving it on all occasions their effectual support… May the children of the Stock of Abraham, who dwell in this land, continue to merit and enjoy the good will of the other Inhabitants; while every one shall sit in safety under his own vine and figtree, and there shall be none to make him afraid. May the father of all mercies scatter light and not darkness in our paths, and make us all in our several vocations useful here, and in his own due time and way everlastingly happy.

And to what should Jews be loyal?

To the words of this week’s Torah portion.

To the God “who shows no favor and takes no bribe, but upholds the cause of the fatherless and the widow, and befriends the stranger, providing him with food and clothing. You too must befriend the stranger, for you were strangers in the land of Egypt.” (Deut. 10: 18-19)

That is America, and that is Judaism.