(RNS) — How badly do Democrats want to win in 2020? Enough to reach out to people whose faith they do not share?

For the past 20 years, presidential and statewide races in Southern swing states like Florida and North Carolina have been determined by a handful of votes, frequently between 1% and 3%. In 2018, Democrat Andrew Gillum lost his race for Florida governor by 30,000 votes out of more than 8 million cast. That same year, Stacey Abrams lost the Georgia governor’s race by 55,000 votes out of about 4 million ballots cast.

In the Sun Belt, the traditional Democratic coalition of African Americans, Latinx, the LGBT community, organized labor, progressives and liberal Jews reliably brings its candidates within sight of victory. What they often lack is a final piece to carry them across.

Within the national Democratic Party, there is spirited debate about the prospective paths to 50%, plus one: attracting disaffected, suburban Republicans and independents, especially women; mobilizing a greater minority turnout, as was the case with Barack Obama in Florida twice and North Carolina once; or, most recently, attracting normally nonvoting millennials with no religious affiliation, also known as “the nones.”

In the South at least, there is another route to consider: extending a hand to a small percentage of sympathetic, socially conscious, white evangelicals. For Democrats, the cost would be minuscule. Welcoming these voters would require no compromises on fundamental Democratic principles.

Research suggests that there is a subset of white evangelicals – perhaps a third, most but not all younger – who seem to be in agreement with much of the Democratic Party’s agenda. They share concerns like hunger, homelessness, human trafficking, health care, prison reform, combating climate change (which they call “creation care”), racial equality, poverty and economic disparity, even some form of common-sense gun control. Some have organized themselves in groups like Evangelicals for Social Action.

“While liberal evangelicals are likely to vote Democrat, regardless of the presidential candidate’s religion,” says religion scholar Myriam Renaud, “moderates may appreciate outreach from evangelical operatives who speak the same religious language and whose faith-based worldview matches theirs.” 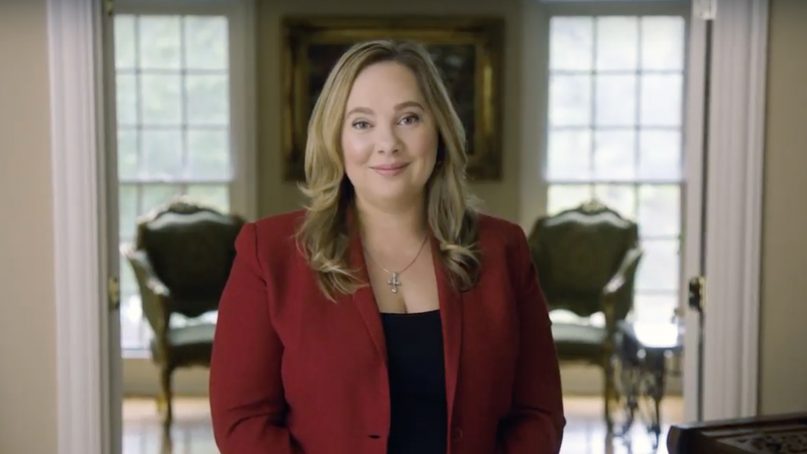 Sarah Riggs Amico is running for U.S. Senate in 2020 from Georgia. Courtesy photo

What brings this issue to the fore is a campaign video released by Sarah Riggs Amico, a Democratic candidate for Georgia’s U.S. Senate seat, now held by Republican David Perdue.

In her ad, Amico, who has described herself as “a pro-choice, evangelical Christian,” reaches out directly to the faith community.

“These are times that test our faith, in our beliefs, in our democracy, in each other,” Amico says to the camera. “My faith teaches that the testing of our beliefs is hard. But it can ground us with purpose. … You don’t love the neighbor, if you shun the poor, the powerless, the least of these.

“Faith is how I know that nobody should be sick because they’re poor, or poor because they’re sick,” she adds. “That we need to protect and sustain the Earth. That we have an obligation to stand up for economic security and social justice no matter the color of your skin or who you love.”

Amico lost a 2018 campaign for lieutenant governor by 3% of the vote, in a campaign which did not feature this kind of evangelical outreach. That same year, the unsuccessful Democratic candidate for Florida’s lieutenant governor was Chris King, a lifelong evangelical, although unlike Amico he steadfastly eschewed the term, preferring to simply call himself a Christian. Both candidates are Harvard graduates. 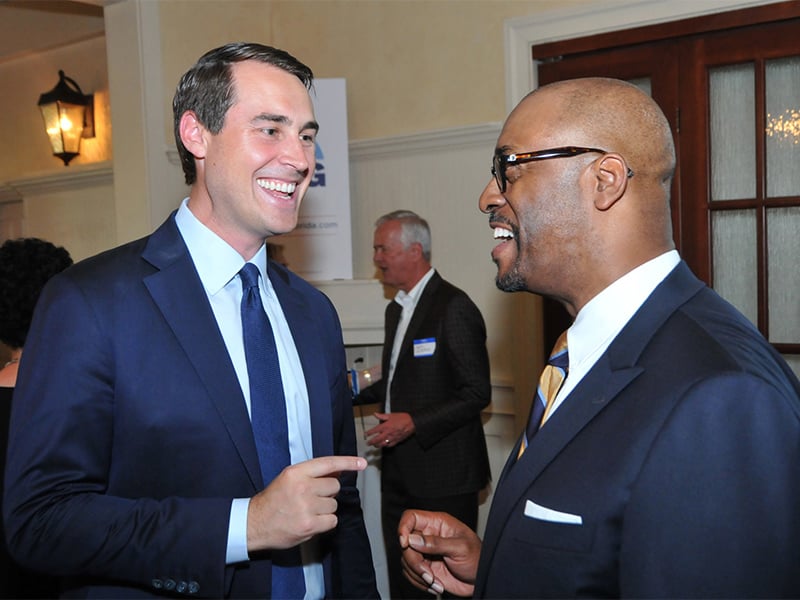 Chris King, left, and Bishop Allen T.D. Wiggins interact during a fundraiser in Orlando, Fla., on May 10, 2017. Photo courtesy of Sarah M. Brown

The conundrum for candidates like Amico and King – and it is a significant one – is that reaching out to white evangelicals is a general election strategy, and a dangerous one for the Democratic primaries. Before being selected as Gillum’s running mate in Florida, King finished dead last in the gubernatorial primary.

This is because many of the party’s secular base voters are frankly antagonistic to evangelicals. The source of this hostility is the perception – not without foundation – that white evangelicals have a stranglehold on the government, presenting a “supposed fundamentalist Christian threat to democratic civility, pluralism, and tolerance,” according to researchers Louis Bolce and Gerald De Maio.

Amico may be insulated from such secular hostility because her husband is an atheist, and the Georgia Democratic Party is thought to be much less secular than the North Carolina or Florida parties.

Practically speaking, all that would be necessary to generate support from sympathetic white evangelicals would be for secularists to stop stiff-arming or ignoring voters (and candidates) with whom they otherwise have much in common.

“Democratic candidates can certainly lay claim to universal principles that are embraced and practiced by believers and unbelievers alike,”said Dick Batchelor, a Florida-based political consultant, by appealing to “‘the better angels” of Democrat beliefs.

Some evangelical leaders, however, are not so sure about this explicit outreach, and others are frankly skeptical about prospects for candidates like Amico and King. 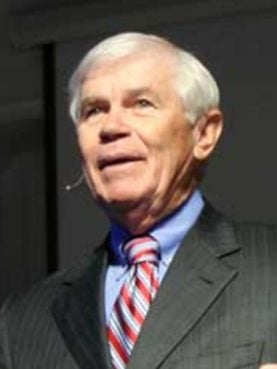 The Rev. Jim Henry, former president of the Southern Baptist Convention, found Amico’s approach “interesting,” but her position supporting reproductive rights, like King’s, is a major stumbling block that could not be overcome for most evangelicals.

“A faith that does not adhere to the moral tenets of Scripture and historical Christianity is questionable and lacks credibility,” he said.

But Amico may be able to tap younger evangelicals, for whom abortion is not necessarily the paramount issue.

An August 2019 poll conducted by Maris for NPR and the PBS NewsHour found that 40% of younger white evangelicals support the concept of a “Green New Deal.” Thirty-four percent would not yet commit to supporting President Donald Trump in 2020.

“The combination of honoring God with humanitarian actions, in this case by ‘taking care of the Garden,’ is a powerful draw,” said Joel Hunter, a registered Independent who has long argued that evangelicals should not be an arm of the GOP. “Most engaged Christians would like to link the thought of pleasing God directly along with responding to societal problems.”

This is similar to the understanding the Democrats have with religious African American voters, who tend to be conservative on abortion but don’t vote based on that issue, but on issues of equality and economic security.

There is also precedent for Democrats voting for an anti-abortion candidate, if only out of gritted-teeth pragmatism: Pennsylvania pro-choicers have learned to live with U.S. Sen. Robert Casey, whose opposition to abortion in turn draws enough Catholic voters into the fold to win.

In the Sun Belt the task would be similar, only with white evangelical voters. In 2016, about 19% of white evangelicals supported the Democratic ticket, then topped by Hillary Clinton, whose campaign made little effort to reach out to them.

What if in 2020 a Democratic presidential candidate without Clinton’s considerable baggage appeals to white evangelicals with a sincere, faith-friendly message emphasizing common ground?

That candidate might reasonably expect to attract another 5%-6% of white evangelicals, as Obama did, taking 26% in 2008 to win in key Sun Belt swing states. Leaving that slice of the pie on the table, so to speak, can be the difference between winning and losing elections.

As it stands, the prospects for such outreach among the current presidential hopefuls are not bright.

A recent study of 58,851 tweets issued by the 20 Democrats who qualified for the first Democratic debate, conducted by Ryan Burge and reported by Religion News Service, found that only 147 of them contained the word “God,” or .2%.

All of this raises some practical questions for the national Democratic Party: How much does the party want to win the White House and recapture the Senate in 2020? Is befriending progressive, white evangelical Christians a price Democrats are willing to pay?

(Mark I. Pinsky is the author of “A Jew Among the Evangelicals: A Guide for the Perplexed.” The views expressed in this commentary do not necessarily reflect those of Religion News Service.)

News
Rabbis are training to protect the vote and quell postelection violence
News
Taco trucks and voter guides boost political profiles of faith communities at the margins
News
Poll chaplains plan to bring a ‘prayerful presence’ to precincts this Election Day
Purple Catholicism
Your dread of the 2020 election and coronavirus will end. What will you obsess about then?
News
1,000-plus faith leaders call for ‘free and fair election’
© Copyright 2020, Religion News Service. All rights reserved. Use of and/or registration on any portion of this site constitutes acceptance of our User Agreement and Privacy Policy, Privacy Statement and Cookie Notice. The material on this site may not be reproduced, distributed, transmitted, cached or otherwise used, except with the prior written permission of Religion News Service.