VATICAN CITY (RNS) — As the synod on the Amazon region enters its final week, the bishops who gathered here to discuss the region’s challenges and make recommendations to Pope Francis will begin preparing their final report. Their words could have a profound impact not only on the Amazon but the entire church, as the ideas they present about protecting the environment, the rights of indigenous peoples as well as adaptation of church practices to local cultures are theoretically applicable anywhere.

The final report for the synod, which has been meeting since Oct. 6, will be put together by a drafting committee made up of bishops elected by the synod and appointed by the pope. After discussion and revisions, the report will be voted on paragraph by paragraph. Passage of any one paragraph requires a two-thirds vote. Only the 185 official delegates to the synod (almost all of them bishops) can vote.

The drafting committee will work with input from 12 synod groups that met to discuss the issues. The groups were organized by language (two Italian, four Portuguese, five Spanish, and one for English and French speakers). Each group of about 20 contained bishops, lay observers and experts who participated equally in the discussions.

The individual reports from these language groups, which totaled 35 pages, are the most accurate representation of where the synod is as it enters its final week.

The reports show that the bishops are unanimous in their concern about the ecological destruction being inflicted on the Amazon by extractive industries (oil, mining and lumber), cattle ranchers, monoculture and hydroelectric dams. The Amazon’s natural biodiversity has been destroyed to benefit development that is unsustainable but provides huge short-term profits to special interests.

Huge hydroelectric dams take away indigenous lands, rivers and sources of food, as do cattle ranches and monoculture. Mines do the same plus pollute the land and water with cancer-causing chemicals.

These issues are of concern far beyond the Amazon and especially in the global north, which benefits from the products and profits coming from the Amazon.

The language groups called for an ecological conversion to a simpler lifestyle that is sustainable and respects Mother Earth as the indigenous people of the Amazon do.

“An ecological conversion to a sober life is indispensable,” explained Portuguese language Group B. This “implies changes in mentality, lifestyle, modes of production, practices of accumulation, consumption and waste.”

This conversion is not simply personal. “Ecological conversion leads the church to assume its prophetic role,” said Spanish Group A, “denouncing the violation of the human rights of indigenous communities and the destruction of the Amazon territory.”

But this ecological conversion and commitment must be grounded in spirituality, since the church is not just a nongovernmental organization. This conversion would lead to “a new style of life that is simple, sober, caring, attentive, without waste, that avoids the disposal of things and people, that is generous and inspired by Francis of Assisi, by Brother Sun, Sister Moon, (and) Sister Water,” explained Portuguese Group C.

The English/French Group suggested the four principles articulated by the Eastern Orthodox Patriarch Bartholomew I to ground this spirituality:

Other groups looked to indigenous values as a foundation for ecological spirituality, “such as community, family, spirituality, communion of goods, respect for the common house,” explained Spanish Group A. 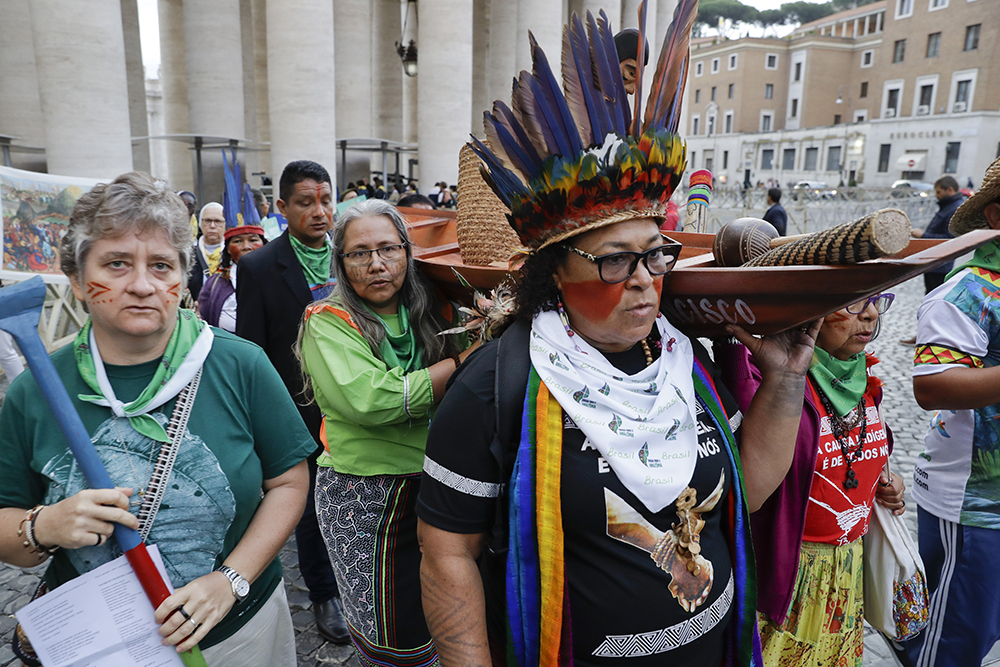 Participants in the Amazon synod arrive in St. Peter’s Square at the Vatican on Oct. 7, 2019. Pope Francis opened the three-week meeting on preserving the rainforest and ministering to its native people as he fended off attacks from conservatives who are opposed to his ecological agenda. (AP Photo/Andrew Medichini)

It is not only the environment but also people who are victims in the Amazon. European invaders enslaved and exploited the region’s native inhabitants. Later, the auto industry exploited them in rubber plantations. Today it is cattle, mining and monoculture industries that invade their territories.

Even now, “Several mega-projects are underway,” reports Spanish Group D. “Violence is exerted on the peoples, the states implement policies conceding (indigenous) territories” to these interests.

The violence against the land and the people of the Amazon was a repeated theme in the group reports. “Violence in the Amazon is practiced against peoples, cultures and nature,” said Portuguese Group D. Several groups decried violence against women and children, especially through human trafficking. Violence also forces the indigenous people either further into the jungle or to migrate to cities.

“As a consequence of these migrations,” explained Spanish Group D, “we have family disintegration, the loss of cultural identity, social marginalization, the rejection by the people of the cities, where they arrive as strangers. They are exploited, fall into violent and criminal structures, into prostitution and so on.” 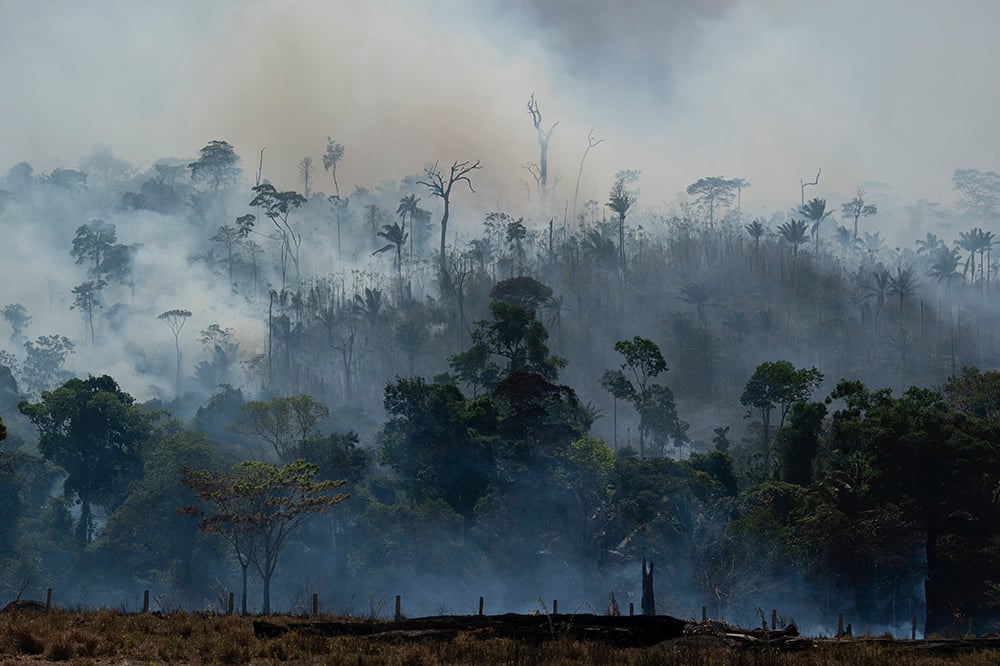 Summing up their conclusions, the Portuguese Group B said, “We say no to deforestation, no to big aggressive projects that destroy the forest, no to monocultures and pesticides. We say yes to sustainable development, yes to ecological conversion, yes to integral ecology.”

The reports also proposed reforms to the church.

A less clerical and more synodal church is needed, according to almost all the group reports.

“The synodal journey for Amazonia has shown us that the process has opened the perspective of a different ecclesiology, more baptismal and collegial, different from the clerical church,” reports Portuguese Group A. “The church with an Amazonian face emphasizes the co-responsibility and participation of the whole People of God in the life and mission of the church.”

Many of the groups spoke of the need of priestly formation that produces men who listen and encourage the participation of laity, especially women.

The need for the church to be inculturated in an Amazonian context was repeatedly emphasized.

Italian Group B stated, “It is necessary for the church to recognize this particular historical moment, and in her tireless work of evangelization to work so that the process of inculturation of the faith may be expressed.”

After noting that there are currently 23 different rites in the Catholic Church, the group went on to call for an indigenous rite for the Amazon, as did other groups.

“We are challenged to promote and live an inculturated liturgy,” insisted Spanish Group D, “as a living experience of faith with its own signs and symbols, guaranteeing the right of every baptized person to celebrate fully, consciously and actively.”

Groups that did not specifically mention an Amazonian rite wrote of adapting the liturgy to local cultures, of using symbols, language and actions that express the positive values of indigenous people.

“Ethnocide must be fought because it kills culture and spirit,” explained Portuguese Group D. “For this reason, the missionary should strip himself of any colonialist mentality and respect the customs, rites, beliefs, habits of the people of that culture.

“The manifestations with which the people express their faith, through images, symbols, traditions, rites and other sacramentals, should be appreciated, accompanied and promoted,” the group said.

The only group to explicitly speak against an indigenous rite was Italian Group A, which wanted to preserve “the substantial unity of the Roman rite.”

The bishops acknowledged in their reports that the Eucharist is not available to most of their people because of the lack of priests.

The English/French group did not consider this a problem, pointing to solutions used in other regions where priests are in short supply. “In other places, such as Africa, the number of priests has never been sufficient to offer Masses every Sunday.” The African church uses many catechists, officially designated teachers of the Gospel, and the group reminded that synod that “The Word is food as well as the Eucharist.”

About half of the 12 groups explicitly supported the ordination of married men. Italian Group A appeared split on the question, while Portuguese Group D called for further thought on the topic.

Some of the groups that favored ordaining married men also supported the diaconate for women. Almost all spoke of the importance of women in the church and urged that they be respected and empowered. Some suggested reviving the ministries of acolyte and lector and allowing women to participate.

The last week of the synod will be crunch time for the bishops. There appears to be a lot of consensus among the bishops, but it remains to be seen exactly what they will do on the ordination of married men, women deacons and on an indigenous rite. Whether these can garner a two-thirds vote is the question.