(RNS) — Why did Robert Bowers go into Tree of Life synagogue in Pittsburgh exactly one year ago, and start shooting, and not stop shooting until he had killed 11 hapless people, whose sole “crime” was to show up for services, and worship, and pray?

It is really quite simple.

Robert Bowers not only hates Jews.

In particular, this part of Judaism.

One of the congregations that uses space in Tree of Life synagogue is Congregation Dor Hadash, a Reconstructionist synagogue, a vocal and visible supporter of HIAS, founded as the Hebrew Immigrant Aid Society. Since HIAS’ inception in 1881, its mission has been to help refugees and immigrants. HIAS helped some of your grandparents and great-grandparents when they resettled in the United States. It proudly proclaims: “Once, we helped refugees because they were Jewish. Today, we help refugees because we are Jewish.”

Bowers could not abide that. In a post on social media, he wrote: “Open you (sic) Eyes! It’s the filthy EVIL jews Bringing the Filthy EVIL Muslims into the Country!! HIAS likes to bring invaders in that kill our people. I can’t sit by and watch my people get slaughtered. Screw your optics, I’m going in.”

In the fevered imagination of Bowers, the very idea that nonwhite, non-Christian immigrants would come to this country is tantamount to racial genocide. A memorial outside the Tree of Life Synagogue in Pittsburgh on Oct. 30, 2018. Official White House Photo by Andrea Hanks/Creative Commons

So, yes: Bowers hates Jews and Bowers hates Judaism. What he would have found singularly distasteful are the words imbedded in this week’s Torah portion: that all human beings are created in the image of God.

And yet, the question still plagues us: Why us? Why do so many people hate the Jews?

Exactly 125 years ago, the French Jewish literary critic Bernard Lazare wrote the first serious history of anti-Semitism. The word itself had existed for barely 20 years.

He was the first person to ask that question: Why do people love to hate the Jews?

Lazare believed that it was because Judaism was radical and revolutionary.

After all, Judaism stood for an abstract, transcendent God that had neither a form nor a shape. In the ancient pagan world in which Judaism first emerged, that was scandalous.

It got worse. The Jews had the chutzpah to say that this invisible, shapeless God actually cared about morality and justice.

So, why do people hate the Jews? Why wouldn’t they? You have a people that lost its homeland and was powerless; which refused to assimilate; a people with its own teachings and books and language and rituals and holidays and meanings. This people defies everything that we know to be true! What is with this people?

That is why the distinguished Catholic scholar and priest Edward H. Flannery said:

“It was Judaism that brought the concept of a God-given universal moral law into the world”; willingly or not, “the Jew carries the burden of God in history (and) for this he has never been forgiven.”

Let me go yet one step further.

One of the most prolific thinkers in the contemporary world is George Steiner, who is a professor of comparative literature at Oxford and Cambridge.

In 1981, Steiner wrote a novel called “The Portage to San Cristobal of A.H.” Steiner imagines that Hitler is alive and that Israeli agents have found the 92-year-old Hitler in the jungles of South America. They arrest him and bring him to trial, where he takes the stand in his own defense.

In his testimony, Hitler says that he had to do what he did. Why? Because the Jews not only invented conscience; the Jews invented the idea of God!

“Was there ever a crueler invention, a contrivance more calculated to harrow human existence, than that of an omnipotent, all-seeing, yet invisible, inconceivable God? … The Jew invented conscience and left man a guilty serf.”

Which is not terribly different from the way that the ancient sages themselves understood the Roman Empire’s hatred of the Jews.

They reminded themselves that God revealed the Torah on Sinai. They took the word for “hatred,” sinah, and they made a pun. It was Sinai that caused sinah. It was the moral law and the obligations that it placed upon the world that caused hatred.

It is, therefore, the Jews’ pesky determination to bring an ethical, spiritual vision to the world. The Jew is the umpire of history. Anti-Semitism is the urge to “Kill the ump!” 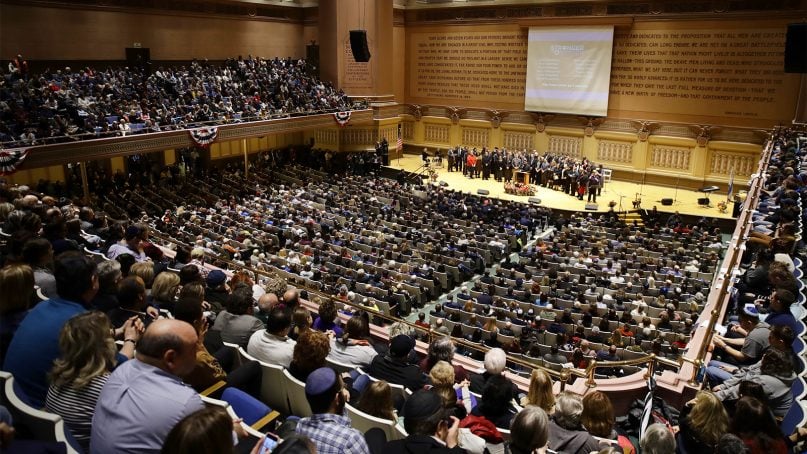 People attend a community gathering in Soldiers and Sailors Memorial Hall and Museum in the aftermath of Saturday’s deadly shooting at the Tree of Life Synagogue in Pittsburgh, on Sunday, Oct. 28, 2018. (AP Photo/Matt Rourke)

That is why Bowers entered Tree of Life synagogue. He killed Jews in the middle of the Torah service because that was the place from whence his hatred emanated. The Jews have the monumental chutzpah to say: God demands righteousness. Righteousness demands that we welcome the stranger. HIAS welcomes strangers into this country. HIAS is Jewish. The Jews are evil. Judaism is evil.

This Shabbat is #ShowUpForShabbat. It is the result of a national effort from the American Jewish Committee. We remember the dead of Pittsburgh, who died on the worst day of American Jewish history.

Mourning and anger prompt Jews to come to synagogue; celebration and joy do not.

It is as if we have internalized the words that the historian and philosopher Simon Rawidowicz wrote more than 70 years ago.

“The world has many images of Israel, but Israel has only one image of itself: that of an expiring people, forever on the verge of ceasing to be. Each generation in the Diaspora saw itself the final link in Israel’s chain. Each always saw before it the abyss ready to swallow it up.”

I reject that view. It is a losing proposition.

As Deborah Lipstadt wrote this week in the Forward:

We are bearers of a magnificent tradition, one that expresses itself in religious, intellectual, philanthropic, artistic, communal, and political contexts. Despite the best efforts of so many generations of non-Jews to harm, kill, and even annihilate us, we celebrate the multi-faceted tradition that is ours and all it has given to the world. We do so, not because of the attempt to destroy us, but despite it.

I support #ShowUpForShabbat. Find which synagogues near you are participating — and go.

Yes, it’s about Eat, Pray, Love: Eat the challah. Pray to God. Love the Jewish people and the Torah and the stranger and God.

News
With the Afghan Adjustment Act on life support, refugee agencies pray for a miracle
Follow us on Facebook!
Submit your photos to RNS