(RNS) — One of my favorite movies of all time is "Patriot Games," based on the novel by Tom Clancy and starring Harrison Ford. Ford plays Jack Ryan, who has ordered a hit on a terrorist training camp in North Africa.

In an amazing scene, Adm. Greer, played by James Earl Jones, invites him into the control room, where they are able to watch the action as it is happening.

When the operation is finished, with its requisite destruction of the camp, Greer turns to Ryan, and, in a grim voice, says: “It’s over.” He sighs, and walks away.

Years ago, I was watching this movie with my (then) young son. He asked me: “Why is that man so sad?”

My response: “Because sometimes, it is necessary to kill. But, you should never be happy about it.”

That was precisely my feeling in the aftermath of the assassination of ISIS leader Abu Bakr al-Baghdadi.

I am referring to President Trump’s triumphalist, graphic description of every detail of this criminal’s agonizing death, complete with his pronouncement that the ISIS leader “died whimpering, as a coward, and like a dog.”

I agree with those who believe that the world is a better, slightly safer place without al-Baghdadi in it. I lack any compassion for him. I believe that the moral order required it. I believe in the rabbinic dictum: “Those who are kind to the cruel will wind up being cruel to the kind.”

But, that is not all that I believe.

I keep returning to that moment with my young son as we reflected on the deaths in the North African terrorist training camp.

And, I keep on returning, in my mind, to that iconic photograph of the Obama team watching, in real time, the capture and murder of Osama bin Laden. 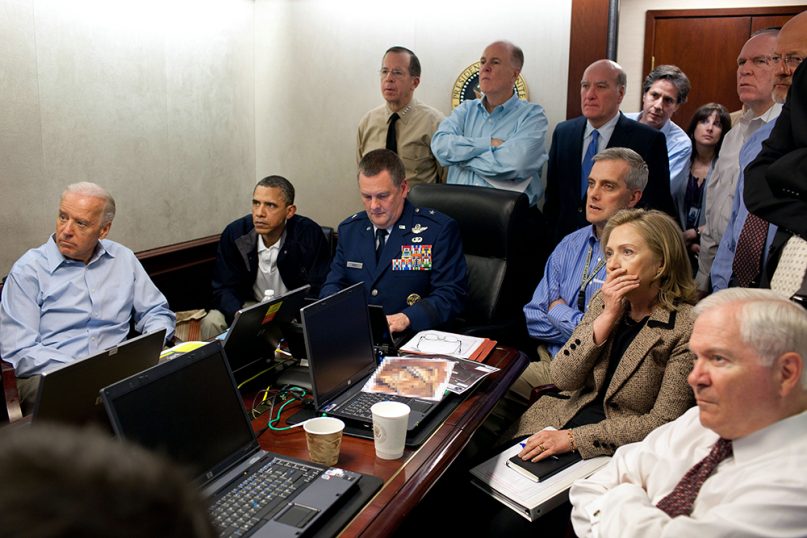 President Barack Obama, second left, and Vice President Joe Biden, left, along with members of the national security team, receive an update on the mission against Osama bin Laden in the Situation Room of the White House, May 1, 2011. Please note: a classified document seen in this photograph has been obscured. (Official White House Photo by Pete Souza)

I keep on returning to that image, remembering in my mind’s eye how then Secretary of State Hillary Clinton had her hand over her mouth and the look in her eyes. I remember the downward turned corners of Joe Biden’s mouth.

There was no celebration in that room. There was only the awful, awe-filled look of moral responsibility that translated as: “This is what we had to do. It was a long time in coming. We will greet this moment with the solemnity and sobriety that it deserves.”

That was how it should be. That was the Jewish way to do it.

What do I mean by that?

“Rejoice not when your enemy falls, and do not let your heart be glad when he stumbles,” says the Book of Proverbs.

Perhaps with that teaching in mind, a classic rabbinic legend states that when the Israelites crossed the Red Sea, and the Egyptian soldiers drowned, the angels broke out in song. God rebuked them: “The work of my hands is drowning in the sea, and you are filled with song!?!”

At the Passover Seder, as we chant the plagues that fell upon the Egyptians, there is the custom to remove a drop of wine from our glasses, one for each plague, in order to diminish our joy.

With regard to an executed criminal, the Book of Deuteronomy says, “If a man is guilty of a capital offense and is put to death, and you impale him on a stake, you must not let his corpse remain on the stake overnight, but must bury him the same day. For an impaled body is an affront to God: you shall not defile the land that the LORD your God is giving you to possess.”

Even the criminal deserves a decent burial and should not be left exposed to the elements, beasts and the intrusive human eye.

There are those who are reading this, and who are saying to themselves and others: “There it is again — that liberal snowflake, overly sensitive whining.”

But, it is also true that I try to view the world through the Jewish eyes, mind and soul that I have inherited. I would expect that those of other faiths would do the same thing.

Because it is not sufficient — neither is it always appropriate — for us to proclaim our faith when it comes to public policy decisions. People of faith might use the database of their moral traditions to discern what it means for us to look at what is happening and how to evaluate it.

I am glad that al-Baghdadi is no longer among the living.

But, how we deal with his death, and the postures that we bring to that death — that is on us. Those decisions shape the fate of our civilization and make it worthy of defense against the likes of ISIS.