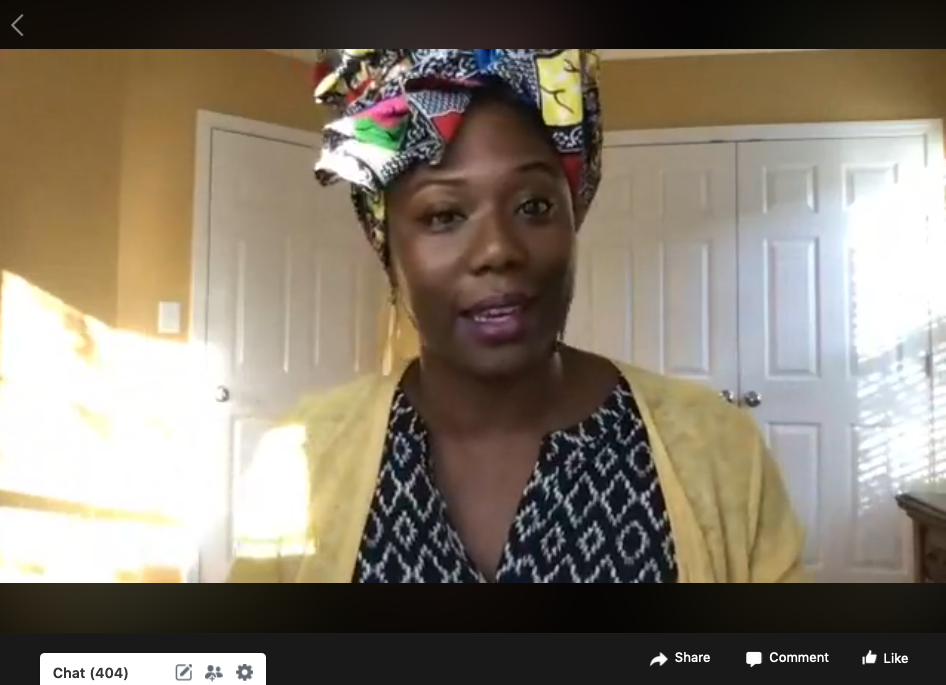 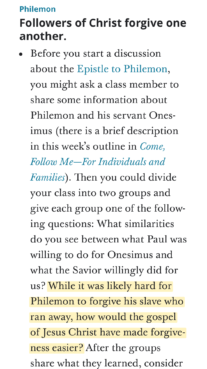 (RNS) — On Sunday (Nov. 3), Mormon social media came alive with criticism of the curriculum for the Church of Jesus Christ of Latter-day Saints, which for the week’s lesson included a statement that suggested Paul was asking a fellow Christian, Philemon, to forgive his slave, Onesimus.

The adult Sunday School version of the lesson asks class members, “While it was likely hard for Philemon to forgive his slave who ran away, how would the gospel of Jesus Christ have made forgiveness easier?”

That prompted Zandra Vranes of Sistas in Zion to post on social media, "Why is the example for the master to forgive the slave for 'running away?' How does this example make it into church curriculum in 2019?"

In the ensuing discussion, some tried to explain the context of Paul's era, while others criticized Vranes for hypersensitivity. She later hosted a live Facebook discussion in which she replied to these critics, "You’re absolutely right. That’s true! Yes, I’m going to be more sensitive because I am black and I am a descendant of slave ancestry. That’s not bad. ... We have to be able to take into account the ways that our lived experiences and the things that impact us . ... are going to shape the way we receive discussions or we receive scripture or we receive teachings in the church.”

Vranes is right. She’s more keenly aware of the dynamics of privilege than most white Mormons ever have to be. I think it’s a safe bet that many white American Latter-day Saints looked at that line in the curriculum and said, “Yeah, how would having the gospel have made forgiveness easier for Philemon?” without also thinking to ask, “Why aren’t we more concerned about the horrible wrong that has been done to Onesimus by a slaveowner who is supposed to be a Christian?”

One more time for the justice impaired: SLAVES DO NOT NEED TO APOLOGIZE TO THEIR MASTERS. If there is to be repentance and forgiveness, it ought to go the other way around. That should be a given. Slavery in the first-century Roman Empire may have been different from slavery in the 19th-century United States*, but every kind of slavery rests on the ownership of one human being by another, which is morally wrong.

In addition to the thoughtless white privilege, embedded in the church’s brief treatment of this story is an equally careless acceptance of unproven traditions about Paul’s letter to Philemon. The curriculum identifies Onesimus as someone who “escaped slavery” and as a “slave who ran away.”

Where in Paul’s actual letter does it say that Onesimus escaped slavery?

Some commenters have pointed out that the idea that Onesimus has run away ignores some key contextual clues from the letter itself. Nowhere in the letter does Paul say, “You’ll never guess who’s here with me in prison! Your slave, Onesimus!”

Presumably, that’s because Philemon already knows where Onesimus is — and Philemon knows because he’s the one who sent Onesimus to Paul in the first place. Roman prisons in this time period did not provide much in the way of food, blankets and support to prisoners, who therefore depended on friends and family on the outside. Philemon, a recent convert who owes Paul a debt of gratitude, may have sent Onesimus to provide Paul with the provisions he needed.

If this theory is correct, then the only surprise for Philemon in receiving Paul’s letter was not that Onesimus had connected with Paul, but that Onesimus had become a Christian. In Paul’s mind at least, the slave had been elevated to the status of a brother.

That may not have been in Philemon’s game plan. It suddenly raised all sorts of questions — not just about Onesimus’ personal fate or freedom, but the role that slavery would play in the new Christian movement going forward.

The fact that the LDS curriculum has skipped right over this (I understand the dilemma; it can’t cover everything) means that we may be missing an underlying point of Paul’s letter. Buried in all this talk of forgiveness is a rallying cry for a slave’s freedom.

Many of us modern readers would love for Paul to have made a declarative statement to Philemon that he could no longer own any slaves because he had become a Christian and slavery was wrong. Paul does not do this. Instead he focuses on the individual, the personal, and he makes his case through a series of Greek word plays that are lost on us today. The name Onesimus is a double pun of sorts in the letter.

First, the word Onesimus means “useful,” and Paul says Onesimus was formerly useless but he’s now living up to his name because he’s a Christian. Second, another word for “useless” (achrestos) is one letter off in Greek from the word for “non-Christian” (achristos), so Paul is going nuts with the fun puns here.

But he’s just getting started, because the more serious wordplay is what he does with “refresh/release” and “my guts/innards/heart.” Onesimus, Paul says, has become the companion of his heart and guts during this prison experience. (The KJV translates the term in verse 12 as “bowels,” but for reasons that are about to become clear, using that term in conjunction with “release” would offer too much glee to 11-year-old boys everywhere, who would delight at the image of Paul’s bowels being released. So let’s go with the more standard translation of “heart.”)

Then Paul closes the letter with a sort of gentle warning that when he is out of prison he’s coming to Philemon’s house for a cozy little visit and a chat, so get that guest room ready (v. 22). Paul will be following through to check up on his instructions.

There’s no historical record of what Philemon did about Onesimus and whether he got Paul’s hints — subtle to us, but not to Greek readers in the first century — that Philemon needed to give Onesimus his freedom. But if we’re going to go with church tradition, which is apparently what the LDS Church is relying upon in interpreting this story, here’s a tradition I particularly like: Nearly half a century after this letter was written, the bishop of the church in Ephesus was an old man by the name of  ... Onesimus.

Bible scholar: Paul's letter to the Romans is what we should read in the Trump era