WHEATON, Ill. (RNS) — For evangelical Christians, the importance of evangelizing is right there in the name.

But it’s not the best approach to building relationships with Muslims and people of other faiths, according to Matthew Kaemingk, assistant professor of Christian ethics at Fuller Seminary and author of “Christian Hospitality and Muslim Immigration in an Age of Fear.”

“Muslims are not a mission or a project that you work on like a science experiment or something,” Kaemingk told an auditorium of young evangelicals Friday night (Nov. 1) at the Billy Graham Center for Evangelism at Wheaton College in the Chicago suburbs. 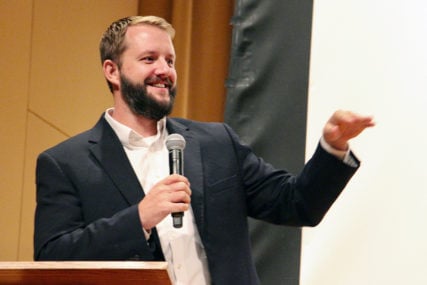 Matthew Kaemingk speaks at the Neighborly Faith Conference on Nov. 1, 2019, at the Billy Graham Center for Evangelism at Wheaton College. RNS photo by Emily McFarlan Miller

The assistant professor’s remarks opened a two-day conference hosted by Neighborly Faith, a nationwide movement that aims to bring Christians and Muslims together.

The idea for Neighborly Faith came several years ago when co-founder Kevin Singer, working as a church planter in the Southern Baptist Convention at the time, was hired to teach a world religions course at a community college outside Chicago.

Singer didn’t have much exposure to people of other faiths. He had only ever taken one course on world religions, and campus ministries had taught him that non-Christians were “misled” and “you sort of have one responsibility to them — and that is to share the gospel and hope and pray that they come to see Christ as Lord and Savior,” he said.

Teaching the course, he became concerned about evangelicals’ posture toward and lack of engagement with Muslims and people of other faiths.

Evangelicals didn’t want to talk about it, Singer said. And many had picked up bad habits as a result: They perpetuated stereotypes, they seemed content with misinformation and, perhaps worse, they had no relationships with the “people that we’re supposed to love,” he said. 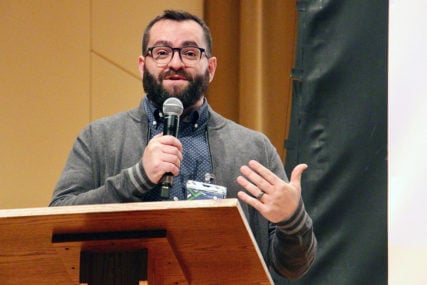 He and Neighborly Faith co-founder Chris Stackaruk, both Wheaton alumni, started a podcast to share stories of evangelical “role models” who are engaging people of other faiths in ways that are “both really loving and generous and hospitable, but also faithfully evangelical,” according to Singer.

The program equips college students to help foster engagement between evangelicals and Muslims on both Christian and secular campuses.

At Wheaton College, for instance, Neighborly Faith fellow Anna Cole is working on creating spaces for dialogue to happen “organically,” like organizing service projects where both evangelical and Muslim students can work together. 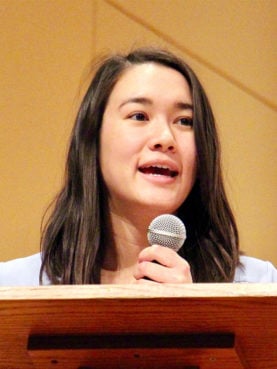 Anna Cole speaks at the Neighborly Faith Conference on Nov. 1, 2019, at the Billy Graham Center for Evangelism at Wheaton College. RNS photo by Emily McFarlan Miller

Her mom is Malaysian Chinese, Cole said, and she grew up making friends with Muslims as she traveled between the United States and Malaysia. A junior, she said she knows it can be hard for Wheaton students to meet people “outside of the bubble.”

But she wants others to experience the same friendships she has had.

And, she said, “Ultimately, I would really love to see the students passionate about loving Christ by knowing the neighbors around them and by learning and really having a heart to reach out and get outside of their comfort zone in doing that.”

Neighborly Faith focused in on evangelicals’ interactions with Muslims as statistics make clear that evangelicals — particularly white evangelicals — have troubling views of their Muslim neighbors.

Alsoofy also shared a picture of who American Muslims are, according to statistics.

“I think one of the biggest things that people don’t know about American Muslims is just how diverse the American Muslim community is — or communities,” she said. “If you look at our data, there’s really no one ethnic group that makes the majority of those in the American community. It’s the most diverse religious community in America.”

Both evangelicals and Muslims might be surprised to realize how small those communities are, she said. There are about 3 million Muslims in the U.S., making up about 1% of the population. 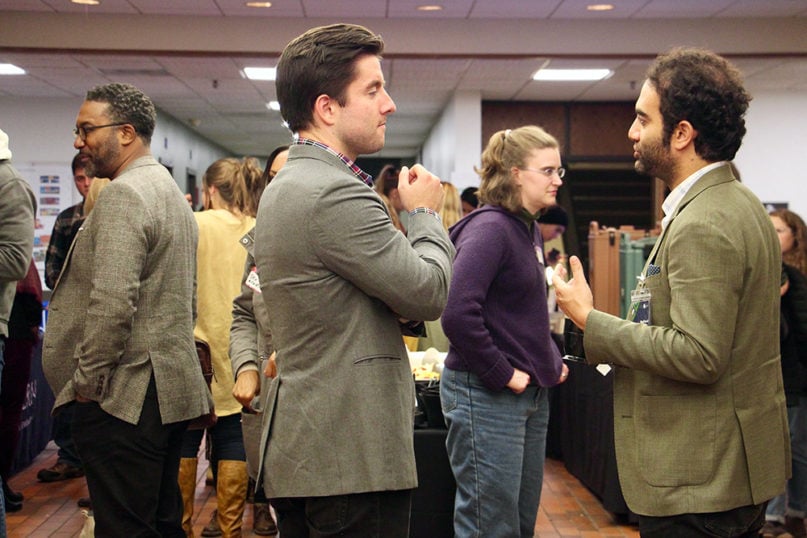 Attendees mingle at the Neighborly Faith Conference on Nov. 1, 2019, at the Billy Graham Center for Evangelism at Wheaton College. RNS photo by Emily McFarlan Miller

In response to some of the data she shared, she suggested evangelicals get to know the Muslims in their communities and learn more about their religion from reputable sources.

“Getting to know more about Islam — actual Islam, the religion — tends to do more for countering Islamophobia or countering hatred than just knowing an individual. So if you can’t find a Muslim around you or someone you want to talk to, find really good sources to know about their religion. That’s something you can do in the privacy of your own home,” she said.

Singer hopes the Neighborly Faith Conference will help evangelicals begin to do that.

“We wondered what would it look like to have basically a campus conversation about multifaith engagement and loving our neighbors with whom we have differences,” Singer said.

The weekend conference was a first for the organization, hosted with InterVarsity Christian Fellowship and Wheaton College on the campus of the evangelical flagship school.

Wheaton has its own fraught history with relationships between evangelicals and Muslims. The college’s first female black professor to receive tenure, Larycia Hawkins, was placed on leave and later parted ways with the school in 2016 after outcry over a Facebook post in which she wore a hijab in solidarity with Muslim women and echoed a statement by Pope Francis that Christians and Muslims worship the same God.

Friday night’s opening sessions at the Neighborly Faith Conference were billed as a family conversation among evangelicals.

On Saturday, attendees heard from Muslim students and leaders on a number of topics: the experiences of Midwestern Muslim students, perspectives on the hijab, an introduction to Muslim-led nonprofits like Islamic Relief, welcoming Muslim refugees to the U.S. Many took advantage of an opportunity to have lunch at the the Islamic Center of Wheaton.

Shadi Hamid, a senior fellow at the Brookings Institution, addressed whether Christians and Muslims can be friends.

“It is something I believe is not just possible, but it’d be pretty great,” said Hamid, who is Muslim. 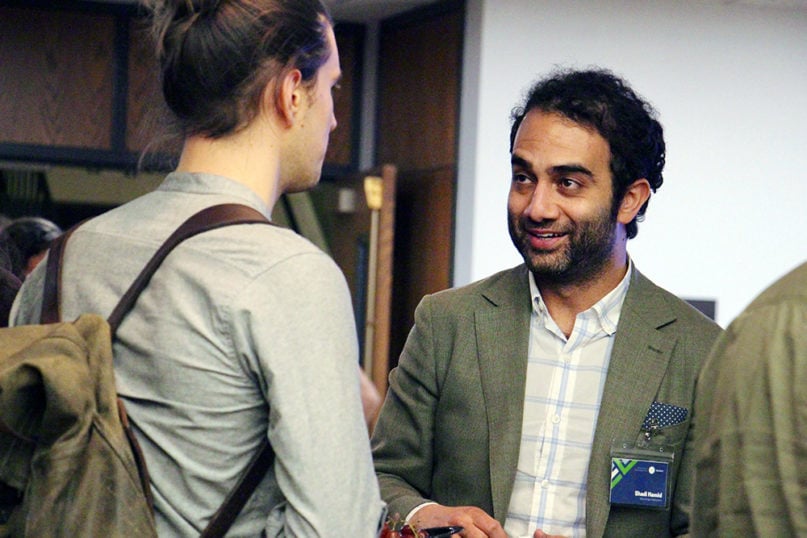 He pointed to his own friendship with Kaemingk, who opened the conference.

“There’s a strong theological component where we learn from each other’s theologies and faith convictions, and I’ve found that to be very fulfilling,” Hamid said.

At least in his friendships with evangelicals, Hamid said he doesn’t feel as though he’s being evangelized. And he isn’t worried about being overwhelmed by evangelicals, who outnumber Muslims in the U.S., wanting to befriend Muslims — “that doesn’t sound terrible to me, you know,” he said.

But he is concerned about statistics like those Alsoofy shared.

“The bigger issue is, because there are more evangelicals and less Muslims, that ultimately within the evangelical community, there has to be internal conversation about how to engage and how to just get better on this stuff,” Hamid said.

Listening to evangelical speakers in the opening sessions of the conference, he said, “You begin to imagine what a different kind of approach might look like — that there is an alternative out there. It doesn’t have to be this way, and we don’t have to accept it.”

Singer said he hopes that family conversation, as well as the opportunity to meet and hear from Muslims, will help change the attitudes of the evangelicals who attended the conference.

An anonymous survey of attendees conducted by Neighborly Faith after the event suggests they may have.

Of those who identified as conservative evangelical students, 49% had neutral or somewhat negative attitudes toward Muslims coming into the conference, Singer said. Afterward, only 6% remained neutral and none maintained a negative attitude.

That means 94% left the conference with either somewhat positive or very positive attitudes toward Muslims.

Singer also hopes the evangelicals who attended the conference will act on what they heard, building friendships with Muslims that are “genuine and mutually beneficial.” He hopes they’ll realize their interests are more closely aligned than they might have thought and consider what it will mean to be a leader in a society that is increasingly diverse religiously.

“I would say if within two years after the conference, 30% more evangelicals in the audience had a Muslim friend, that would be amazing,” he said.