(RNS) — The bishops of the Western Jurisdiction of the United Methodist Church have declared their churches a “safe harbor” for LGBTQ clergy.

And it comes months before new restrictions strengthening the denomination’s ban on the ordination and marriage of its LGBTQ members, which are set to take effect on Jan. 1.

“We are haunted by the actions of the 2019 Special General Conference, which impose new and harmful definitions and restrictions on full participation of LGBTQ+ persons in the Church and abandon robust engagement of scripture to narrow biblical literalism,” the declaration stated.

“We do not believe The United Methodist Church has the authority or the power to impose limits on the movement of God’s Holy Spirit in the lives of God’s beloved LGBTQ+ children.”

The restrictions come as part of the Traditional Plan approved in February by a special session of the General Conference, the denomination’s global decision-making body. 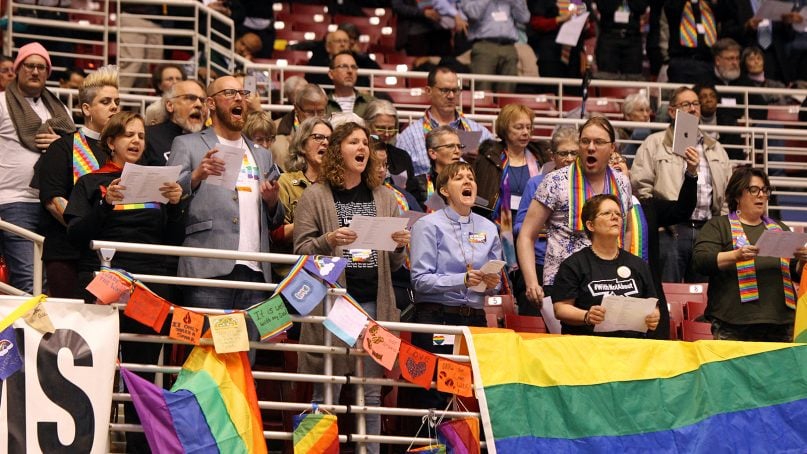 The Traditional Plan bars bishops from consecrating, ordaining or commissioning “self-avowed practicing homosexuals,” even if they have been elected or approved by the appropriate church body. It prohibits those church bodies from approving or recommending them as candidates, as well.

The plan also will make it easier to file complaints against LGBTQ United Methodists seeking to enter ministry and against clergy presiding over same-sex weddings, according to the bishops of the Western Jurisdiction.

It strengthens current complaint procedures and penalties in the denomination’s rulebook, the Book of Discipline. A clergy member who performs a same-sex wedding will face a minimum one-year suspension without pay for the first offense and a loss of credentials for the second.

There is nothing else in the denomination’s rulebook, the Book of Discipline, that comes with a mandatory punishment, according to the bishops of the Western Jurisdiction.

The Western Jurisdiction will not withhold or challenge ordination based solely on a person’s gender identity or sexual orientation, according to Wednesday’s Safe Harbor Declaration.

It also will not punish clergy who officiate the marriage of “two adults of any gender or sexual orientation,” it said.

“At the same time, we recognize and will uphold the requirement that LGBTQ+ clergy, with all clergy, ‘maintain the highest standards of holy living’ in their personal and professional relationships,” the bishops said in the declaration.

The jurisdiction’s five active bishops invited their fellow active and retired bishops, who make up the denomination’s Council of Bishops, to join them in signing the declaration during their autumn meeting.

And they’re hoping other United Methodists will sign online and act on it, as well.

“The bishops of the Western Jurisdiction do not intend to act alone. We call upon the entire Church to offer safe harbor for LGBTQ+ clergy and laity to participate fully in the life of The United Methodist Church,” according to the declaration.

Oliveto, who was consecrated as the United Methodist Church’s first openly LGBT bishop in 2016, told Religion News Service she hopes the declaration will be seen as a “word of hope for people who are living in high anxiety.”

“For young people who wondered if there is still a home for them in the church, I hope they see we in the West are saying, yes, there is a place for you. There is a home for you. You are a vital part of the body of Christ,” she said.

The jurisdiction’s bishops needed to make that clear to people, the Mountain Sky bishop said, because anxiety is “sky-high” for many United Methodists  — especially LGBTQ clergy.

That anxiety among the clergy she is responsible for and appoints is what convinced Stanovsky she needed to act, the Greater Northwest bishop said.

She wondered how she and her staff could “share the risk” with those clergy members. Finally, she said, she realized when complaints about clergy came to her, she had a choice how to respond, including whether to open a formal investigation.

“We know that we’re taking some risk in taking this stance. … We may be challenged, and, if challenged, the Judicial Council may have to decide whether what we’re doing is reasonable or not,” Stanovsky said.

“What we’re trying to be sure is that we are fulfilling our responsibilities with integrity and standards. (It’s) not that we’re just throwing all the expectations of clergy out the window.”