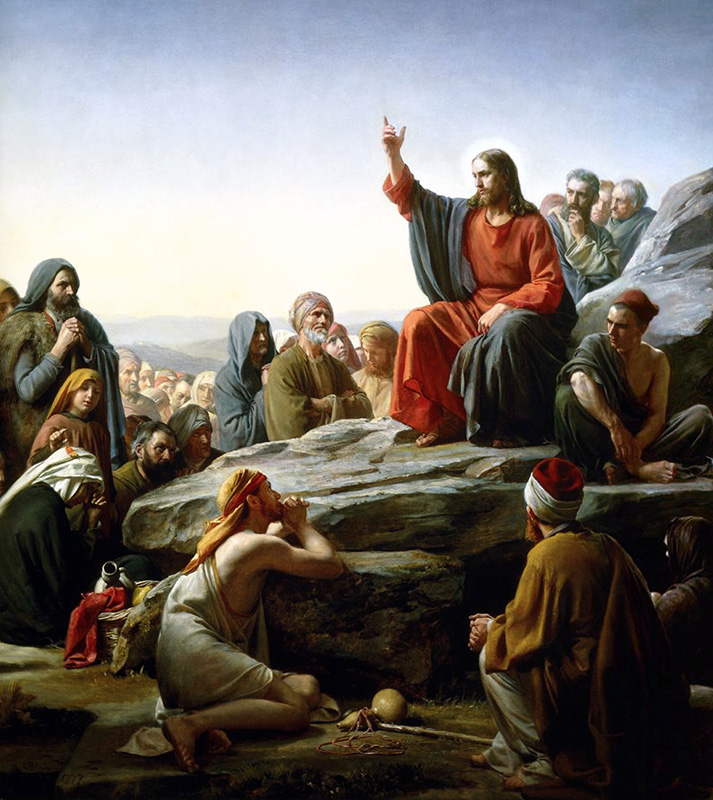 “The Sermon on the Mount” by Carl Bloch, created in 1877. Image courtesy of Creative Commons
December 6, 2019
Mark Silk

(RNS) — Who is supposed to love their enemies and pray for them? Christians.

You have heard that it was said, "You shall love your neighbor and hate your enemy." But I say to you, Love your enemies and pray for those who persecute you.

While the Hebrew Bible nowhere ordains that enemies be hated, a certain allowance to gloat over them can be detected, as in Psalm 23: "Thou preparest a table before me in the presence of mine enemies."

That's not the Christian way. As my RNS colleague Tom Reese points out, there's also Jesus' command in Luke to “[l]ove your enemies, do good to those who hate you, bless those who curse you, pray for those who mistreat you.”

These are the texts that lie behind Pelosi's angry response to right-wing scribbler James Rosen's asking if she hates President Trump. "As a Catholic, I resent your using the word hate in a sentence that addresses me," she said. I don't hate anyone ... I pray for the president all the time. So, don't mess with me when it comes to words like that."

Naturally, the object of her prayers could not resist getting into the act, tweeting, "She says she 'prays for the President.' I don’t believe her, not even close."

Why would Donald Trump not believe her?

I confess to being perpetually astonished by Trump's abysmally low cultural I.Q. You'd think that anyone brought up in Western civilization in the last couple of millennia would be at least dimly aware of the trope of praying for your enemies. I wouldn't expect the Sermon on the Mount to contain his favorite verses, but why is there no tiny voice in the back of his head that whispers, Yes, that is what Christians are supposed to do."

Praying for President Obama is what, for example, Franklin Graham, deep-seated Obama adversary and one of Trump's most fervent evangelical supporters, said he was scripturally obliged to do every day. Trump, by contrast, seems to ask, "Why would my enemies pray for me? Why would they wish good on me when I wish no good on them?"

Just as Pelosi's response to Rosen opened a window onto her spiritual identity, so Trump's tweet opened one onto his.