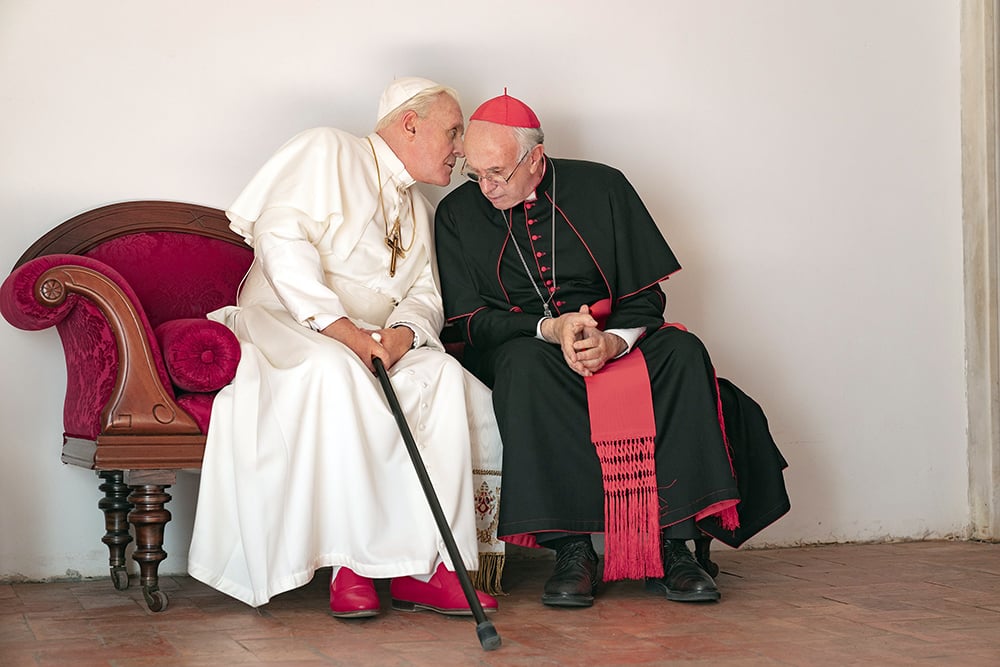 Jonathan Pryce as Cardinal Bergoglio, right, and Anthony Hopkins as Pope Benedict in a scene from "The Two Popes." Photo by Peter Mountain/Netflix
January 6, 2020
Thomas Reese

(RNS) — The first time I watched Netflix’s “The Two Popes,” I hated it. Watching through the eyes of a journalist, I regarded the movie as a total fiction — Cardinal Jorge Bergoglio did not come to Rome to submit his resignation and Pope Benedict XVI did not tell the cardinal he was planning to resign.

I was upset when Benedict was portrayed unfairly as confessing that he did not do anything about the sex abuser and founder of the Legionaries of Christ, Marcial Maciel. In truth, before he became Benedict, Cardinal Josef Ratzinger was the only one in the Vatican who pressed to investigate Maciel, and when he became pope, Benedict forced Maciel into a retirement of prayer and penance.

The second time I watched the film, two days before the Epiphany, I relaxed and accepted it as a work of fiction that portrays two men who have serious disagreements and yet are able to talk about them. They grow in respect for one another and become friends even if they still disagree. This is an important message for the church and the world at large.

It never happened, but it teaches us a truth about human life.

Scripture scholars do not consider the story of the three Magi to be historically true; rather they see it as conveying a theological or spiritual truth. We are asked to be open to the true message of the Magi story and not be distracted by trying to figure out the astrophysics of the star of Bethlehem. (Science fiction writer Arthur C. Clark has a wonderful short story, "The Star," about a Jesuit astronomer and space traveler whose faith is challenged when he discovers the origin of the star.) "Adoration of the Magi” by Fra Angelico, circa 1445. Image courtesy of Creative Commons

For the early Christians, the miracle of the Magi story is not the star that moves through the night. Rather the miracle is that salvation is being offered to the Gentiles. For the Gentiles this was good news, but for the early Jewish followers of Jesus this news was shocking. It would be like us hearing that salvation is being offered to extraterrestrials.

The life and teachings of the adult Jesus are anticipated in the infancy narratives: his special relationship to God as his father, his identification with the poor and oppressed, his openness to the Gentiles, his fulfillment of Old Testament prophecies, his persecution by political and religious authorities, his role as the new Moses and the new king of Israel — all these and more are anticipated in the infancy narratives.

In the story of the Magi, we see some of these themes. We see the Gentiles going out of their way to find Jesus; we see the opposition to Jesus from the political and religious establishment, even though they have Scripture to tell them that he is the Messiah.

But the celebration of the Epiphany is not only about the past. The story of the Magi reminds us today that the Spirit can speak to people outside the Jewish and Christian communities.

As Christians we must acknowledge that Hindus, Muslims, Buddhists, agnostics and people from indigenous religions sometimes hear the Spirit better than we do. That is why we Catholics participate in interreligious dialogue, so we can learn what they have heard from the Spirit. We do not participate just to convince them that we are right and they are wrong. 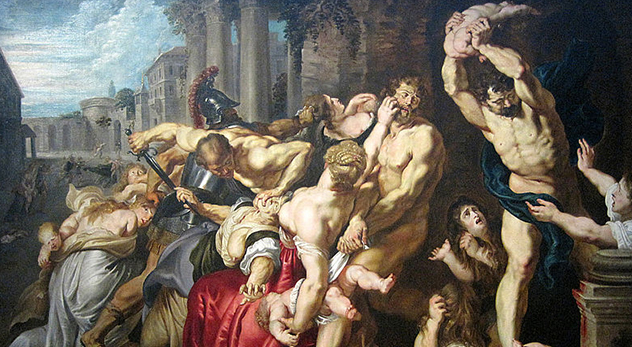 The story of King Herod should also remind us of all those, like Jesus, who suffer political and religious persecution today. In every family that flees violence in Africa, the Middle East or Central America, we should be reminded of the Holy Family fleeing to Egypt. In every family at our border, we must see José, María and baby Jesús. The gospel reminds us of our duty to help those who, like the Holy Family, must flee their countries as refugees because their lives are in danger.

Epiphany is also about the future. The Christmas season ends with the Epiphany to remind us that there is a future Epiphany, a future divine manifestation, when Christ will come again, when he will establish his kingdom of justice and peace.

We continue to pray, “Come, O Come Emmanuel.” We pray for Christ’s coming when we fear what the future will bring, especially in the face of global warming and talk of war. Today, more than ever, we need hope that is based on Christ’s love for humankind.

As Christians, we are not just oriented to the past, we are also looking forward to the future — not simply by sitting passively waiting for Christ’s arrival to save us, but also by working actively to prepare the way of the Lord. We do this when we work for justice, peace and the protection of Mother Earth.

The Epiphany is not only the story of the Magi, it is our story. It celebrates our call to seek out Jesus, to follow his star, to meet Jesus with Mary his mother, to give him homage, and to offer to him whatever gifts we have. It reminds us that our destiny is to be seekers who listen to the Spirit and follow a star.