(RNS) — I started out this year on a Caribbean cruise, as my husband and I celebrated our 50th birthdays together. We zoomed around Bonaire on a motor scooter, snorkeled in Aruba, and lounged on deck chairs reading massive books. (I finally finished “Middlemarch,” which has been on my TBR list since college.)

And we ate. Oh my heavens, did we eat.

Being on a cruise is an exercise in overindulgence. Everything is delicious, and almost everything is already included in the price, so it’s hard to exercise much self-restraint. After the first day on board, I abandoned my usual habit of writing down my food and exercise in a smartphone app and just gave myself over to the delights of the perpetual smorgasbord.

I’m paying for it now, as you can imagine, but it actually feels good to return to normalcy. After December’s gluttonous winter holidays, followed immediately by our face-stuffing vacation, my body seems ready for a healthy dose of asceticism.

In this I’m adhering to the body’s natural rhythms, according to author Jay Richards. In his new book “Eat, Fast, Feast,” Richards says that human beings have evolved to thrive in many different conditions, including when food is present (hello, cruise buffet!) and when it’s not available. In fact, the body runs most optimally when we help it do what it was designed to do, which is to alternate regularly between both states. 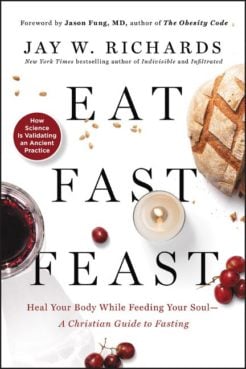 That means intermittent fasting. The book advocates the regular practice of abstaining from food from time to time for physical and spiritual health. Richards, an adult convert to Catholicism, spends the early part of the book sketching out the importance of fasting in early Christianity and then trying to explain why the expectations about fasting softened or even disappeared in most churches. (Short answer: Human beings are lame. We do not like fasting, and we’ll make all kinds of excuses so we don’t have to do it.)

There are deeper and more thorough books about the role of fasting in Christianity, including excellent spirituality books by Scot McKnight, Lynne Baab, and Richard Foster. But what “Eat, Fast, Feast” offers that those do not is a strong focus on dietary recommendations and a detailed six-week plan that’s custom-made for Lent, which is right around the corner.

Richards seems to be as much a convert to ketosis (when we draw on fat reserves rather than on immediate sugars) as he is to Catholicism. He describes his dietary epiphanies in highly religious language: he once was lost in traditional health recommendations that told him to limit saturated fats, count his calories, and beware the bogeyman of cholesterol. Despite adhering to those recommendations and exercising regularly, he experienced several chronic health problems.

He “now is found,” having stumbled upon a ketogenic diet that transformed his life. Years ago, when trying to determine why he kept having a recurring health problem, a doctor recommended that he eliminate half a dozen foods (eggs, dairy, wheat, soy, nuts and seafood) for a period of time. They were hoping to get an answer to the health mystery after three months, but he started feeling better after just three days.

After that turnaround, Richards began to experiment with many different kinds of fasts, and a gift of the book is that he describes many of them in detail: alternate-day fasting, one-meal-a-day (OMAD) fasting, time-restricted eating, and longer fasts of water only. The book’s six-week plan incorporates many different fasting techniques, but they’re introduced gradually so readers don’t crash and burn. Here’s the basic plan.

Week 1: Begin a ketogenic diet that’s high in saturated fats — about 80% of total calories (!) — and extremely low in carbohydrates. Green veggies are good, fruits are mostly bad, and carbs like bread and pasta are totally off limits. The idea here is to switch the body into a state of ketosis. Whatever you eat in the six weeks, except for “mini-feasts” on Sundays where you might enjoy a piece of fruit or a morsel of very dark chocolate, will be based on these same ketogenic diet principles.

Week 2: 16/8 fasting. Here you introduce time-restricted eating, consuming all your calories in an 8-hour period and not eating for the other 16 hours of the day. Don’t worry about restricting calories, which won’t happen until Week 5.

Week 3: 20/4 fasting. This is much the same as Week 2, except that you’ll consume all your calories in a 4-hour period and fast the other 20.

Week 4: 20/4 and 23/1 fasting. For four days this week, just continue doing the 20/4 routine you learned in Week 3. On Monday, Wednesday, and Friday, however (traditional Christian fast days), move to a 23/1 schedule where you eat all of your food in a single one-hour window near the end of the day.

Week 5: On four days of the week, use the 16/8 schedule. But on Monday, Wednesday, and Friday, the three 23/1 fast days, also limit your calories so you are only consuming 400 to 600 total calories on those days. This first experience of OMAD will help prepare your body for the longer fast in Week 6.

Week 6: In the latter half of this week you’ll attempt a water-only fast of 36 to 72 hours. If you’re doing this during Lent, this will take place during Holy Week, from “Spy Wednesday” (a cool liturgical tradition I had never even heard of before reading this book) to Holy Saturday. And you will be very, very glad to greet the Easter dawn.

I’m not going to be doing the full six-week Lenten fast that Richards recommends. It’s just too much for me. But I’m planning to take some of the principles of weeks one and two — like eliminating sugar, restricting food consumption to certain time windows, and boosting the role of green veggies in my life — and carve my own Lenten discipline out of that. (Giving up sugar is going to be hard enough!)

I’m also going to take him up on what I think is a brilliant suggestion in the book, which is to combine Lenten fasting with a ramped-up practice of fixed-hour prayer, or the Liturgy of the Hours. Intermittent fasting and praying the Hours were made for each other, I think, so I’m going to give that combo a try.

Also, I won’t be going on another cruise for a long while.