Update 1/27/20: The headline for this column has been changed. I explain why here.

In the Mormon world, the last two weeks have witnessed vigorous condemnations of the Church of Jesus Christ of Latter-day Saints’ “Come Follow Me” curriculum for 2020, specifically the printed version’s inclusion of racist ideology that describes dark skin as a “curse” from God for unrighteousness.

The online version of the curriculum has been corrected to remove the offensive teaching; the Church reiterated its current stance that it “disavows the theories advanced in the past that black skin is a sign of divine disfavor or curse”; and an apostle expressed regret about the gaffe when he spoke to the NAACP on Martin Luther King Day.

Fair enough. I’m glad the Church has acknowledged the error and done what it can to remove it. My favorite response on Twitter was Emily Jensen’s photo of setting fire to that particular page of the manual:

If the #churchofjesuschrist is unwilling to destroy the printed racist, out-of-date, disavowed page of the current #comefollowme #bookofmormon manual, maybe members should take the initiative. pic.twitter.com/701knB07Sb

But while we’re at it, could we just burn down the entire “Come Follow Me” curriculum and start from scratch? The racism of that one page is only the most glaring issue. Let me explain.

Back when I was a Gospel Doctrine teacher, I dreamed of having a curriculum that was actually usable in class—one that would be an aid to vigorous discussion rather than a tool for actively shutting such conversations down. The old manual’s MO seemed to be to 1) repeat weekly self-congratulations that we alone possessed the truth, the whole truth, and nothing but the truth, 2) fret aloud about the various sins of the world (insert immoral enemies du jour HERE), and 3) reiterate the vital importance of obedience and following the prophet.

What I wound up doing most of the time was taking the assigned scripture passages and a few well-chosen questions from the manual, adding other questions and prompts of my own, and leading the discussion from there.

So when I learned that the Church was dumping the old manuals in favor of “Come Follow Me,” I was optimistic. Finally!

After one year of the new curriculum, however, I don’t think it’s an improvement. It contains many of the same us-vs.-them formulations of the past (and has even, as we saw with the racist statement the Church is now trying to backpedal, imported some of the wording of the old manuals wholesale). It’s insular, it can be shallow, and it often feels more committed to advertising the correctness of the institution of the Church than it does uncovering the actual meanings of the scriptures.

I got through last year’s New Testament curriculum by following the reading schedule while supplementing it with other things, including authors like N. T. Wright, Pete Enns, Elaine Pagels, Carol Newsom, and Timothy Beal. I’m starting to do the same with this year’s Book of Mormon curriculum.

I think the disconnect between the scriptural text and the curriculum is going to be even stronger this year because the Book of Mormon is, at heart, a single story, an epic thousand-year saga of a family that truly put the fun in dysfunctional. The book’s literary cohesion makes it even more egregious when we ignore its larger context and peel away only those tiny snippets that bolster our POV, which is what the curriculum does again and again.

What’s terrific is that there is a large, and growing, library of excellent resources for people who want to go deeper in the Book of Mormon. Here are a few if you, like me, aren’t learning anything new from the “Come Follow Me” curriculum and find it to be more propaganda than study aid. This is not an exhaustive list, just a personal one, which I’ll be adding to throughout the year, so send me an email if you have a reading suggestion.

The Book of Mormon Made Harder: Scripture Study Questions. 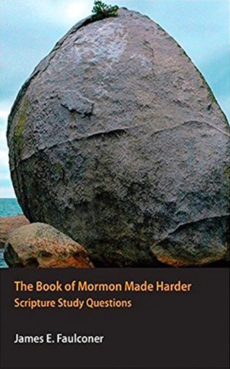 James Faulconer, a professor at BYU, has created a sort of cottage industry of this “made harder” series, which seems a clear rejoinder to the “made easier” promises of other books.

What it is, essentially, is an entire book of questions, arranged chapter by chapter according to the Book of Mormon.

“We learn new things when we respond to new questions, and the person who says, ‘I no longer get anything out of the Book of Mormon’ has stopped running up against questions to think about as he or she reads,” Faulconer writes.

Here’s a page that covers, roughly, the assigned reading for this week (Faulconer’s book was organized according to the previous curriculum reading assignments, so it’s not exactly parallel). Many of Faulconer’s questions are about details I totally missed when I was reading the assigned passages. Some of them make me uncomfortable—which is what I need to grow. Whereas the “Come Follow Me” curriculum approaches 1 Nephi 11–15 by declaring that “The Lord prepared the way for the Restoration” through events like the arrival of Columbus and the American Revolution and then demonstrating that the “great and abominable church” wants to tear down the truth we possess, Faulconer’s book is not about positioning ourselves as the lone heroes in God’s ongoing story. It is trying, first of all, to simply understand the Book of Mormon in its context. That begins with asking fresh questions.

A twelve-book series of short books from the BYU Maxwell Institute. I wish the first of these “brief theological introductions” were already available, since we’re studying 1 Nephi this month and could benefit from it right now instead of in February when it will be released. But good things take time, and it looks like this series is going to be worth the wait. I’ve gotten a promotional PDF of the first installment, and it’s excellent. If this is any indication of the quality of the rest of the series, I will be buying all twelve books, which are:

The reading experience for me has been punctuated by a lot of nodding and underlining and asking “now, how did I never notice that in the text before?” Here is the organization of the 1 Nephi volume, which I think will be typical of the series, with the first half outlining the book or books’ structure and main themes, and the second half highlighting specific theological issues or questions. 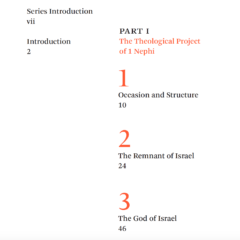 These books are short, beautifully designed, and inexpensive at less than $10 each. I think they’re going to be a lifeline to me this year.

If you can’t invest $120 in the “brief theological introductions” series, Ben Spackman’s blog is free, updated weekly, and very thoughtful. Start with 1 Nephi here. Ben’s opening post observed something I have somehow failed to notice all this time: when Nephi is writing this record, it’s 30 years after he left Jerusalem, and about 20 since his split with his brothers. So he’s writing as a roughly 50-year-old man with a clear apologetic purpose to explain why he, the younger brother, is now in charge. How does this change our understanding of the opening chapters?

. . . all that scripture says here is that there was a Gentile, separated by the waters, who was wrought upon by the Spirit of God to cross the waters. That’s very little detail to identify someone. Columbus is the obvious answer, but is he the best answer?

Columbus certainly saw himself as God’s messenger to “the isles of the sea”. . . . On the other hand, he also caused an awful lot of pain and destruction in enslaving natives and committing atrocities, and was not terribly Christ-like. These two things can coexist, as God can and does make use of awful people. We need not venerate and sanctify Columbus and ignore the evil he did. Notably, the text says nothing about the character of this Gentile.

The post then goes on to provide links to further discussions and readings on the topic. If nothing else, familiarity with this question could steer a Gospel Doctrine class conversation into a more balanced and less jingoistic direction than the curriculum’s facile statement that “Nephi saw that the Holy Ghost would inspire Christopher Columbus to make his famous voyage to the Americas.”

Now that sounds promising, and necessary, and of good report.