Last week I published a column that I called a survival guide to this year’s “dumpster fire” of a curriculum for the Church of Jesus Christ of Latter-day Saints. The second half of the piece took a positive approach by pointing readers to supplementary resources that are intellectually rigorous and of good report, but the first half contained a litany of complaints about various shortcomings of the “Come Follow Me” program.

I want to apologize. While I stand by much of that content, I can now see problems with the tone and the way I approached it. In thinking about it over the weekend and digesting feedback from strangers and friends, I feel I should temper it in at least three ways.

First, the “dumpster fire” language was, well, unnecessarily incendiary. When I wrote that headline I was thinking specifically of the debacle with the preprinted 2020 manuals containing a racist teaching that had been carelessly imported from the old manuals. This has placed the Church in crisis mode as it attempts to handle the fallout. (And the fallout could continue, as that lesson is the assigned reading for February 3–9 and the Church has yet to issue formal instructions to teachers and parents that the curriculum’s presentation of the “curse” of dark skin is incorrect and should not be used.)

Mormons love to begin their sacrament meeting talks with a dictionary definition of whatever topic they’ve been assigned for speaking, so here is Merriam-Webster’s “informal” definition of the phrase “dumpster fire,” which the venerable dictionary added in 2018:

“an utterly calamitous or mismanaged situation or occurrence: disaster.”

I would say that the unforced error of perpetuating racism in the printed 2020 curriculum does indeed qualify as a dumpster fire. The curriculum as a whole, however, does not, so I’ll be changing the language in that headline on RNS. I don’t have the power to change it in any other outlet that syndicates my pieces, like RealClearReligion or the Salt Lake Tribune, once my columns have been posted there. But at least I can retroactively moderate what is in my power to do. 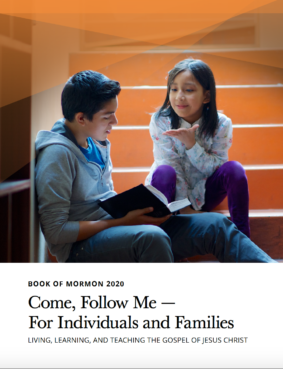 Second, I need to acknowledge that the “Come Follow Me” curriculum is working for many people, including people I know and respect. For example, yesterday in my ward a friend gently explained to me how he and his family use it to guide their scripture reading a little bit each day throughout the week, and then gather again on Saturday to debrief about what they’ve all learned. And various readers have contacted me or explained on social media that they feel the new curriculum has made Sunday School discussions more personal, provided a template for people of all ages to be “on the same page” in their scripture reading, and invited people to meet together in study groups if they want to.

The fact that the curriculum is doing good things for those people is essential, as their stories are every bit as important as mine. I’m sorry I was so caught up in my own dissatisfaction that I discounted other people’s positive experiences.

The third point is along those same lines: the elitist way I framed the piece as a “thinking” Mormon’s guide to additional resources. There are all kinds of “thinking” Mormons, and in the grand scheme of things the direction of our hearts is more important anyway. For me personally, those two things are inextricably tied; if I am not learning something new, my heart tends to stagnate as well. I’ve been like that since childhood. But everyone is different.

If we have to have a single curriculum that everyone studies throughout the world—and it’s worth asking ourselves why we do this, since the practice is relatively recent in our own history and has few parallels in other global religions that wisely allow latitude for local wisdom—we could do it better. The “Come Follow Me” curriculum is more committed to repeatedly congratulating the faithful for already possessing the truth than it is to digging deeper in that truth. It takes the scriptures out of their historical context and squeezes them to conform to the idols we hold most dear.

These things bother me enough that I find the curriculum generally unhelpful. But if it’s working well for you and your family, and bringing you closer to Christ, then keep on keeping on.

Addendum: Here’s another problem with my original column: In my list of resources about the Book of Mormon, I forgot to include one of my favorite books, which is Grant Hardy’s Understanding the Book of Mormon: A Reader’s Guide (Oxford, 2010). You can purchase that now-classic from Amazon here.

My 2016 discussion of Hardy’s book appeared in the Journal of Book of Mormon Studies under the title “Comprehending the Book of Mormon through Its Editors,” and is available for download at the BYU Scholars’ Archive.