(RNS) — Warning: This column contains a light spoiler for the first four seasons of the SyFy/Amazon series “The Expanse.” So if you inadvertently learn something you didn’t want to know, please don’t put me out an airlock.

I’m a recent convert to the show. After several years of hearing about it from like-minded sci-fi nerds and after reading this excellent analysis of the earliest episodes’ Mormon content on “Times and Seasons,” I was intrigued enough to give it a try. I have not been disappointed. The writing is strong, the performances even stronger. I’ve started reading the books as well, which offer deeper world-building than the television show is able to provide.

That future world includes some Mormons.

While it’s a cheering thought that my religion has survived several hundred years in the imagination of the series creator, James S. A. Corey (a pen name for two writers collaborating together), I’m not so enthusiastic about the way its Mormons seem frozen in time.

What strikes me most about the series’ portrayal of the Latter-day Saints of the future is how similar it is to depictions in the present. In other words, the television series and the books it is based on are fascinating cultural products of our own day. Both seem to require Mormons to be unchanging exponents of a bygone era. And by the 24th century, the halcyon age the Mormon characters keep trying to emulate is — you guessed it — the 19th century of the Utah pioneers.

When the series opens, the Mormons of the future are building a colossal ship they call the L.D.S.S. Nauvoo, which they plan to take into the outer reaches of space as a colonist-hauler. Chafing under birth control restrictions on an overpopulated Earth, they are poised to embark on a massive exodus for their people, escaping not only the limitations of enforced family size but also the escalating tensions between Earth and Mars, Earth’s heavily militarized former colony. 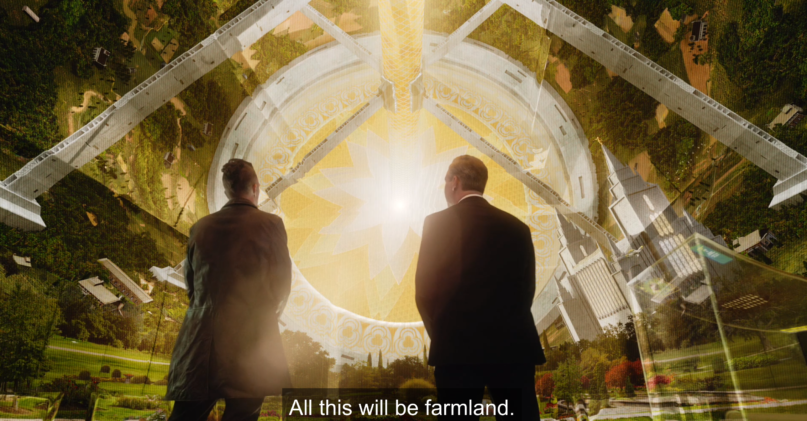 Elder McCann explains to Detective Miller the plans for the L.D.S.S. Nauvoo, a portable Eden for the Mormon colonists. Video screengrab

The state-of-the-art ship the Mormons create is strangely obsessed with the past, with agricultural murals gracing the walls of the bridge. They even outfit the Nauvoo with farm equipment and berths for livestock. The Mormon colonists have every hope of making the desert bloom in their eventual destination several generations hence, a distant outpost planet that may not even be habitable.

It’s a brilliant nod to Mormon history, or at least that history as retold in the popular imagination. In the 1840s, Mormons abandoned their homes in Nauvoo, Illinois, and headed west to practice their religion in a Zion of their own making. (In that case, the family-related collision with government regulations was not over mandatory birth control but the practice of plural marriage.)

On their way to Utah-pia, the Mormons were stopped by U.S. military agents recruiting men to fight in the Mexican War. The hundreds of Mormons who signed on as “volunteers” to the Mormon Battalion didn’t have much choice in the matter. The historical irony is that the Mormons, who were heading to Utah in order to flee the jurisdiction of the United States, wound up having to fight in the very war that made Utah a U.S. territory approximately five minutes after they arrived there.

“The Expanse” recapitulates that history, albeit almost entirely offstage. The plot point never goes anywhere because the Mormons never go anywhere (here is your spoiler alert). Their ship of dreams is commandeered during an intergalactic crisis and never given back to them. “The Mormons are gonna be pissed,” comments one character as the theft goes down. Another Mormon exodus, another case of getting caught in the middle of a war they didn’t ask for.

The Mormons aren’t just pissed; they are litigious. They want their ship back and appeal to the courts to get it, but their quest for justice comes to naught in the chaos of contested interplanetary jurisdiction. It’s a different century, and yet “your cause is just but I can do nothing for you” is still the primary message the Mormons receive when they seek compensation from the government. 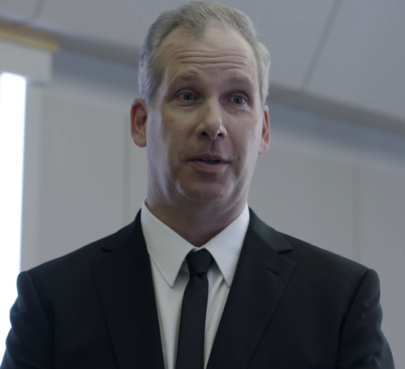 If themes of 19th-century Mormon persecution are alive and well in this imagined world of the 24th century, the Mormons themselves seem stuck firmly in the 1950s. Every Latter-day Saint who gets screentime in “The Expanse” is white, which is particularly notable given the multiracial future depicted there. Earth, Mars, and “the Belt” — the violent no-man’s-land that is oppressed by both planets — have every race and ethnicity under the rainbow, and such diversity is simply unremarkable. Race and gender have ceased to be sources of division (believe me, there are plenty enough class struggles to make up for it — this is far from a utopian society). Women are taken in stride as ship captains and chief engineers and presidents of planets.

And in this mix are the Mormons, uniformly and predictably white. The few Mormons who have speaking parts are male, who stand out because of their full suits, crisp white shirts and neckties. We assume women exist (because birth control), but they are never heard. They appear in one micro-scene of a crowd shot, sporting modest skirts and French braids, but don’t blink or you will miss them. These Mormon women are not leaders. They do not interface with the public, and “the brethren” are still referred to as making decisions for the Mormon people.

It’s a shame that in this carefully imagined world of the future, Mormons are unchanging and flat. Some continuity is recognizable and comforting: They are still conducting missionary work, for example. One possible change — or is it a mistake on the part of the writers? — is that their “temple” now appears to be open to the public. Even Miller, the hard-nosed agnostic detective, gets into the temple. But otherwise, the Mormons have not been permitted to grow or evolve beyond a stereotyped, monochromatic nostalgia for their own distant past.