(RNS) — Lent is almost upon us, and for many Christians, it cannot come soon enough. Our hamster-wheel daily experience of deference and service to our consumerist use-and-throwaway culture has Americans longing for the shift to the countercultural lifestyle that Lent brings with it.

As my co-author for this column and I were discussing our need for Lent’s respite from the relentlessness of contemporary existence, we stumbled on a poignant and prophetic message from before either of us was born. In 1974, Pope St. Paul VI offered a message for Lent in which he called on fellow Christians to make an intentional and hard “break” from “too exclusive attachment to our worldly goods.”

Paul in turn invoked the words of St. Basil the Great, the bishop of Capadoccia, in modern-day Turkey, who died in 379. If we keep our abundant resources to ourselves, Basil insisted, we are actually keeping them unjustly from those who do not have enough.

Pope Paul cited Basil’s very hard sayings to reinforce that we sin in both “mind and heart” as long as we “refuse millions of our brothers and sisters the things that their human development demands.”

Indeed, Paul VI appeared to anticipate our current era of inequality, a phenomenon that was just then getting underway. He charged us to “reflect at a time when hatred and conflict are caused by the injustice of those who hoard when others have nothing, by those who put their own tomorrow before their neighbor’s today, and by those who through ignorance or selfishness refuse to give up what they do not need for the sake of those who lack the bare necessities of life.”

For centuries, then, the church has taken Lent as not only a restorative time out, but a chance to reassess how we, in our “normal” lives, contribute to the inequities of our culture. 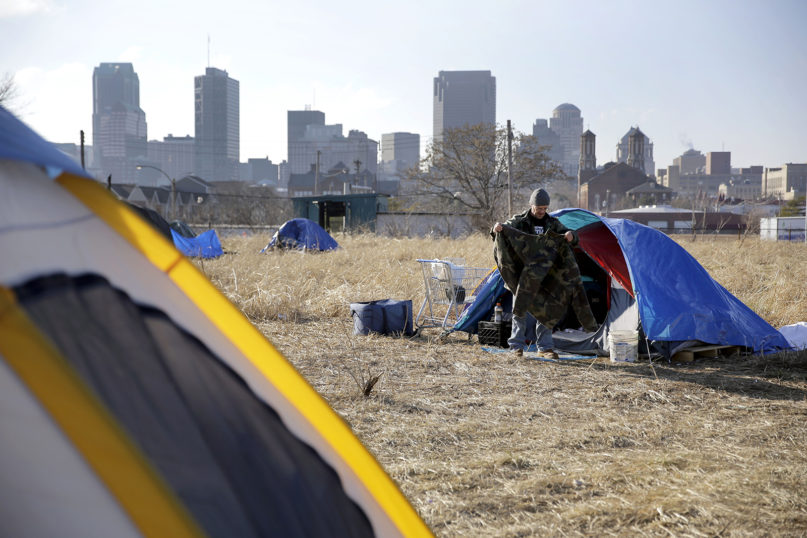 Terry cleans out his tent at a large homeless encampment, near downtown St. Louis, Tuesday, Jan. 27, 2015. The gap between the haves and have-nots in the United States grew last year. (AP Photo/Jeff Roberson)

It’s a message that speaks profoundly to our time. Anyone who has been following politics knows that the Democratic presidential candidates have focused like a laser on income inequality. Senators Elizabeth Warren and Bernie Sanders have built their campaigns on solving the problem through a wealth tax, while their opponents on the right push us in the exact opposite direction, arguing that tax cuts produce more tax revenue and that low-wage workers are getting bigger raises than their bosses since the 2017 tax reform act took effect.

What’s clear is that if nothing is done to stem the increase in income inequality, this already very serious problem is going to get worse. As it is, American CEOs have seen their pay rise by 1,000 percent in the last 40 years on average and now make 248 times that of the average worker.

While those on the political left and right agree income inequality is a serious problem, in our current polarized environment we have seemingly little hope of finding common solutions. The views of our last two presidents demonstrate just how difficult it is to find common political ground. President Barack Obama identified income inequality as “the defining challenge of our time,” and since leaving office he has marveled at the abundant and redundant wealth his post-presidential life has brought.

“Right now I’m actually surprised by how much money I got,” Obama said in a July 2018 speech that closely tracked Pope Paul’s Lenten message. “There’s only so much you can eat. There’s only so big a house you can have. There’s only so many nice trips you can take. I mean, it’s enough.”

Meanwhile, President Trump has signed into law the lowest tax rate for the 400 richest Americans: a paltry 23%.

Partisanship is not the point here but, rather, that Lent can help us turn away from the froth and anger of politics and focus on how our participation in a consumerist, throwaway culture contributes to inequality. During this sacred time, we are called to quiet our hearts made so anxious by the “more, more, more” our culture incites us to. We are called to focus on the glorious simplicity and generosity to which the Gospel of Jesus Christ calls us.

(Sherif K. Moussa is a litigator in private practice in New York City whose practice focuses on civil rights, special education law and disability law. The views expressed in this commentary do not necessarily reflect those of Religion News Service.)

News
Conspiracy theories and the ‘American Madness’ that gripped the Capitol
Opinion
How self-proclaimed ‘prophets’ from a growing Christian movement provided religious motivation for the Jan. 6 events at the US Capitol
Opinion
Change is slow — but it’s coming, and it’s why they rioted at the Capitol
News
Heathens condemn storming of Capitol after Norse religious symbols appear amid mob
Opinion
Truth over power: It is past time for the church to speak plainly about the election