He’s a former president of the nation’s largest Protestant denomination and once traveled the country drumming up support for the Cooperative Program, the church giving program that funds much of the convention’s missions.

Yet, after three years, Graham’s congregation, Prestonwood Baptist Church, which claims 45,000 members, started to withhold money from the SBC. At issue: Graham’s disagreement with Russell Moore, Southern Baptist ethicist and Never Trumper, who once referred to Donald Trump as “an arrogant huckster.”

Graham, one of the president’s evangelical advisers, felt that Moore’s criticisms of Trump and his evangelical supporters was out of bounds. He didn’t want his church’s dollars to support Moore’s work at the denomination’s Ethics and Religious Liberty Commission.

Prestonwood eventually starting sending money to the SBC again. But it has opted out of funding the ERLC, which Graham thinks has outlived its usefulness.

“The focus of the ERLC is not the focus of the mainstream of the SBC in terms of its approach to politics, to conservative thought and theology,” Graham told RNS in a phone interview this week.

Graham is not alone. About 100 of the denomination’s 46,000 churches said they would withhold funds from the Cooperative Program because of the ERLC back in 2017, according to published reports. Since that time, more churches have threatened to do the same, according to leaders of the SBC’s Executive Committee. 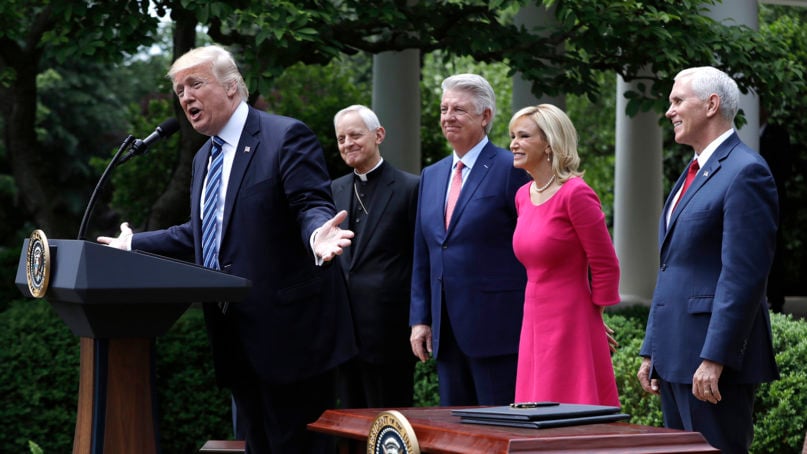 Mike Stone, chair of the Executive Committee, said this week that committee members have heard anecdotal evidence that churches are displeased with the ERLC and withholding money. So the committee voted to launch a new task force to review the ERLC to see if it is fulfilling its “ministry assignment” or if its actions have threatened donations to the cooperative program.

Graham said that the Executive Committee made the right move. He has long believed that Southern Baptists should “address the direction of the ERLC and the disposition of its leader, Russell Moore.”

“The reason the Executive Committee is taking this action is because of the chaos and the concerns that many feel as a result of the ERLC and its leadership,” he told RNS.

The board of the ERLC strongly opposed that assessment, and on Thursday (Feb. 20), issued a letter to the Executive Committee, saying it won’t cooperate with the newly formed task force unless the denomination votes for such an investigation at its annual meeting:

”At a time where a unified voice is needed for our cooperative gospel work, the Executive Committee is sowing needless division, treating trustees with disrespect, and spreading suspicion with this unnecessary task force,” the ERLC statement said. “Even if the appointment of this task force does not violate the letter of the law, the existence of the task force and the process by which it was created unquestionably violates the spirit of friendly cooperation.”

Moore, 48, who has been president of the ERLC since 2013, is admired by younger Southern Baptists who are uneasy with the close ties between the SBC and the Republican Party, especially in the age of Trump.

“Moore showed a way to apply your Christian faith to politics,” said Russell Meek, a 36-year-old Southern Baptist writer, editor and lecturer in Old Testament and Hebrew at Ohio Theological Institute. “It’s not like you have to be a Republican. He shows a more nuanced way of navigating difficult issues. He was able to reach across the generational divide and give us this hope for the future.”

So far there’s little evidence that giving to the Cooperative Program for national Southern Baptist programs is down or that there is widespread disapproval with the ERLC. A recent report from Baptist Press shows giving is on an “upward trend,” with donations up about 3% from last year, according to February figures. The ERLC receives less than 2% of Cooperative Giving dollars.

A spokesman for the SBC Executive Committee said there are still concerns about the future of the Cooperative Program, because overall giving to state conventions, which share funds with national ministries, is down.

Randy Davis, executive director of the Tennessee Baptist Mission Board, which has more than 3,000 member churches, said a recent survey of Southern Baptist congregations in Tennessee garnered “a great deal of responses” about giving to the ERLC.

Some churches, he said, asked whether or not the ERLC received funding from the Open Society Foundation, founded by billionaire George Soros —  a rumor recently debunked by Baptist Press. Others have more general questions about the direction of the ethics commission.

“We try to listen to their concerns and answer their questions,” said Davis. “We also encourage them to contact the ERLC directly.”

In 2018, a local church delegate, known as a messenger, brought a motion to the floor of the SBC’s annual meeting calling for a complete defunding of the ERLC due to displeasure with Moore’s leadership. The motion was soundly defeated. 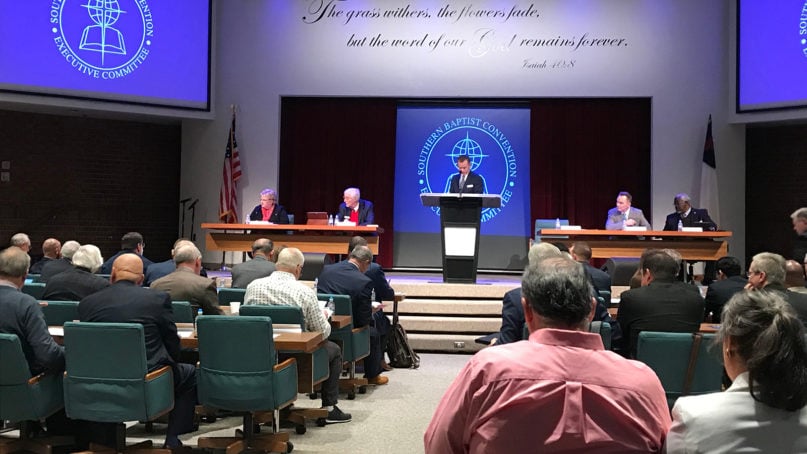 Stone said a previous review did not find a widespread drop in funding from churches because of the ERLC. He said the defeat of the 2018 motion does not inhibit the Executive Committee from doing another review.

“While many churches are concerned, there are also many churches who are engaged with the SBC primarily because of their enthusiasm about the work of the ERLC,” he said. “The assessment of this matter is clearly within the ongoing responsibility of the Executive Committee and was not in view in the 2018 motion.”

At least one member of the Executive Committee has argued in the past that the ERLC should be shut down and its budget redistributed to fund missions. In 2017, committee member and conservative businessman Rod D. Martin, a former staffer for Mike Huckabee, called the ERLC’s involvement in politics “ineffective, inefficient, distracting from the Gospel and divisive of men of goodwill” in a column for the Florida Baptist Witness.

Martin has been a frequent critic of Moore. Appearing on the Todd Starnes radio show to discuss the Executive Committee’s moves, Martin said he and other evangelical voters supported Trump to prevent the “nightmare” of electing Hillary Clinton.

“The idea that we are using tithe dollars to shame Southern Baptists who thought that might have been a bad idea and maybe they ought to stand up for their pastor and keep him safe — I just can’t fathom it,” he said. 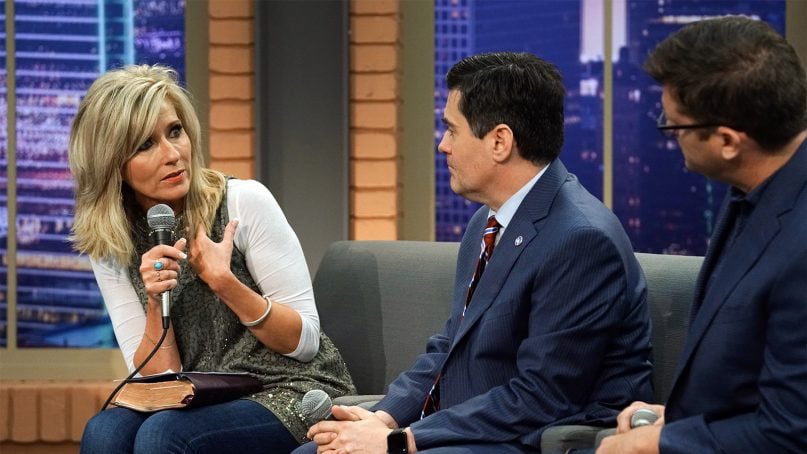 Beth Moore, author and speaker, left, Russell Moore, president of the ERLC and Matt Carter, pastor at Austin Stone Community Church in Austin, Texas, discuss preventing and dealing with sexual abuse within the church at the Cooperative Program’s booth in the exhibit hall at the Kay Bailey Hutchison Convention Center on June 11, 2018, in Dallas. Photo by Kathleen Murray via Baptist Press

After news about the task force broke, bestselling author and speaker Beth Moore (no relation), took to social in what appeared to be a defense of Russell Moore. The two are friends and have shared a stage at Baptist events in the past.

“The stuff I’ve seen happen in the last 3 years to godly people who had guts enough to go against the grain over personal convictions is no joke,” she posted on Twitter. “The intimidation tactics, the twisting of facts, the smearing of reputations, the threats to jobs. This stuff’s real. 2 words: God sees.”

Moore was not available for comment. But the ERLC’s press secretary said Moore has no plans to step down.

He has been mostly silent about Trump since the election. The ethics commission has instead worked to promote racial justice and fight sexual abuse in Southern Baptist circles. Last year, the ERLC unveiled the Caring Well Challenge, a curriculum designed to help churches prevent abuse and to care for abuse survivors.

Many of Moore’s actions, with the exception of his past statements about Trump, have been embraced by Southern Baptist leaders.

“I think he has done a lot of good representing the SBC in D.C. and in the wider culture,” said Thom Rainer, former head of LifeWay Christian Resources.

Rainer, now CEO of Church Answers, a consulting firm, said he was surprised by news of the task force, saying he had not seen Moore make any controversial comments in months. 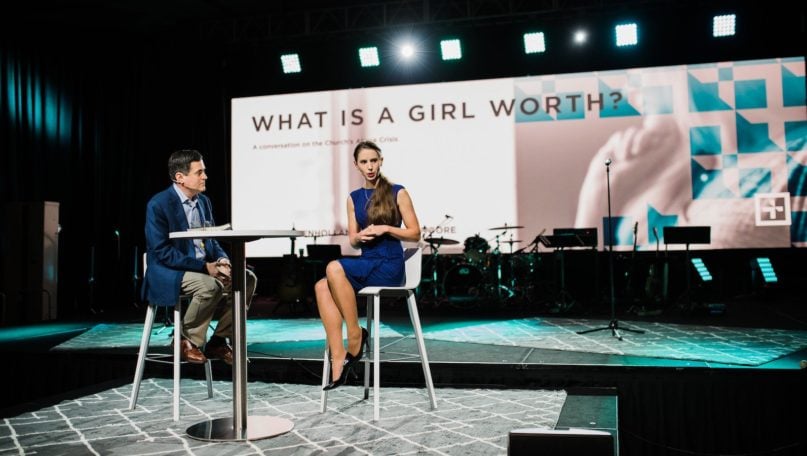 Others said they were stumped by pastors questioning the need for the ERLC.

“The ERLC and the partners they work with have been able to deliver great results,” said the Rev. Bart Barber, pastor of First Baptist Church, Farmersville, Texas.

“I can’t imagine that in this day and time — that religious liberty needs no defense,” he added. “We need to be championing religious liberty for all people of all faiths. There’s a tremendous need for that year after year.”

Barber, a former first vice president of SBC, served on the board of trustees of another Southern Baptist institution that has been controversial in recent years. He was among the trustees at Southwestern Baptist Theological Seminary who ousted legendary Baptist leader Paige Patterson in 2018. Southwestern cut ties with Patterson over allegations that he’d covered up rape accusations while serving at another Southern Baptist seminary in the early 2000s.

Barber said unlike the situation with the ERLC, the Executive Committee did not intervene in the controversy over Patterson. 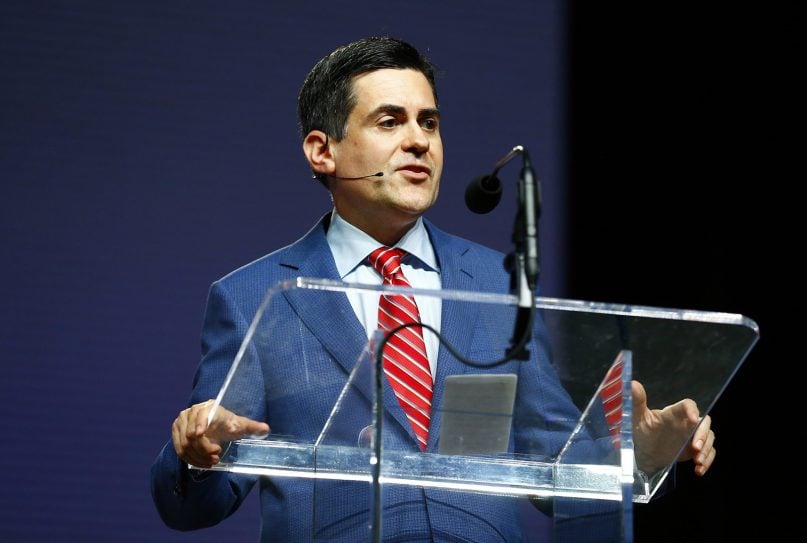 Barry Hankins, chair of the Department of History at Baylor University, said the ERLC has a history of taking controversial stands.

Richard Land, Moore’s predecessor, was criticized in the mid-1990s for being part of an ecumenical group called “Evangelicals and Catholics Together.” He also supported the Interfaith Coalition on Mosques, which defended the rights of American Muslims to build houses of worship. He withdrew from the group in 2011, saying that as a denomination official, he could not be seen as promoting the building of mosques. Land retired in 2013 after being rebuked for plagiarism and making insensitive comments about race.

Hankins said that in the past, the ERLC has often found common cause with Republicans without being lock-step with the Republican Party. That may be changing, he said.

“The SBC has to decide whether they want an ERLC that will speak independently on the issues or an ERLC that toes the Republican Party line.”