(RNS) — Both Sen. Elizabeth Warren, a United Methodist, and former South Bend, Indiana, Mayor Pete Buttigieg, an Episcopalian, turned to Scripture when asked about their personal mottos at this week’s Democratic debate in South Carolina.

Former Vice President Joe Biden, a lifelong Catholic, has spoken throughout his campaign about running for president to “restore the soul of our nation.”

And Sen. Bernie Sanders has a new campaign ad declaring, “I am very proud of being Jewish, and that is an essential part of who I am as a human being.”

But few Americans see the Democratic presidential candidates as very religious, according to a survey released Thursday (Feb. 27) by Pew Research Center.

Of those four candidates, Americans were most likely to say Biden was “very” or “somewhat” religious — but that still was just over half (55%) of survey respondents, according to Pew data. 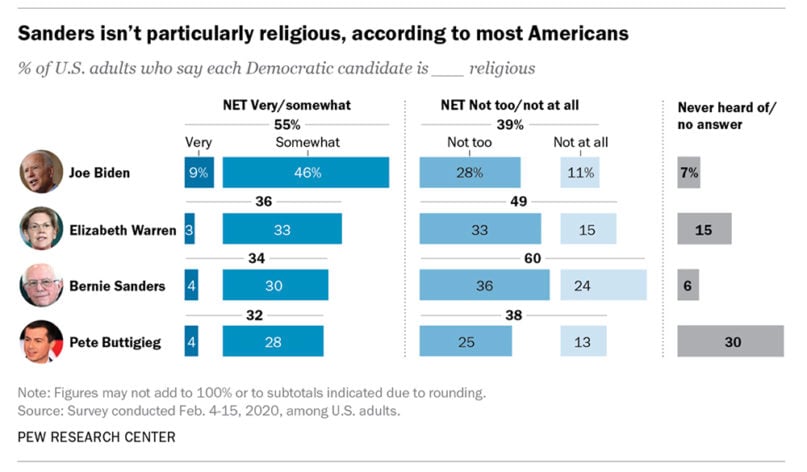 Perhaps surprisingly, respondents were least likely (32%) to say Buttigieg was very or somewhat religious, despite the fact the candidate frequently speaks about his faith. The former mayor — who is the first openly gay candidate to launch a major campaign for president — also has been critical of white evangelical Protestants’ overwhelming support for President Donald Trump in the 2016 election, making one of his rallying cries on the campaign trail, “God does not belong to a political party.”

But then, respondents also were most likely (30%) to say they had never heard of Buttigieg or to give no answer about him compared with other candidates.

Among religious traditions, black Protestants, whom Pew characterized as highly religious and overwhelmingly Democrat, were most likely to view the candidates as religious — with the exception of Buttigieg. Among black Protestants, 72% saw Biden as very or somewhat religious; 61%, Sanders; 53%, Warren; and 39%, Buttigieg, according to the survey.

RELATED: Meet the pastor who prays over Elizabeth Warren before every debate

The survey covered only Biden, Buttigieg, Sanders and Warren.

The margin of error for the survey is plus or minus 1.6 percentage points, according to Pew.