(RNS) — Last week (Feb. 26) I went to a noontime Ash Wednesday service in Rome. I was supposed to be in Venice for several more days, but, as rumors swirled about the spread of coronavirus in Italy and the prospect of a lockdown in Venice loomed, I had decided to head home early. Already church services in the north of Italy had been shut down, baptismal fonts had been emptied of their holy water, lest they spread contamination, and museums, schools and tourist sites, as well as churches, were closed.

The public events of Venice Carnevale — the traditional last blast of libertinage before the penitential season — were likewise canceled from late Sunday night. (Private parties were also legally banned).

It was, in other words, a strange but fitting time to reflect on my own mortality. To be reminded, in the words of the Ash Wednesday service, that we are but dust, and to dust we shall return, amid the increasingly global panic over COVID-19, was to be reminded of how culturally insulated we have become from the notions of death and bodily givenness.

While the coronavirus is potentially extremely serious — its fatality rate is about 20 times that of the ordinary flu — there had only been two reported cases in Venice at the time of the shutdown. No formal quarantine took place in the city, but travelers nevertheless fled: Saturday, it was impossible to get from my Airbnb to Saint Mark’s Square, two minutes away, without shoving through a throng of people with cameras, dawdling five abreast; by Monday morning, the streets were deserted but for a few tourists wearing medical masks, despite their reported ineffectiveness in keeping the disease away.

Yet these measures, a form of ritualistic magical thinking, persist: If we can only cling to these totems, if we can only wear these items, if we can only take these precautions, we will be safe — not just from death but from the consciousness of its possibility. We will be, once more, comfortably sterilized; we will exist, once more, in a world in which our bodies are under our control. 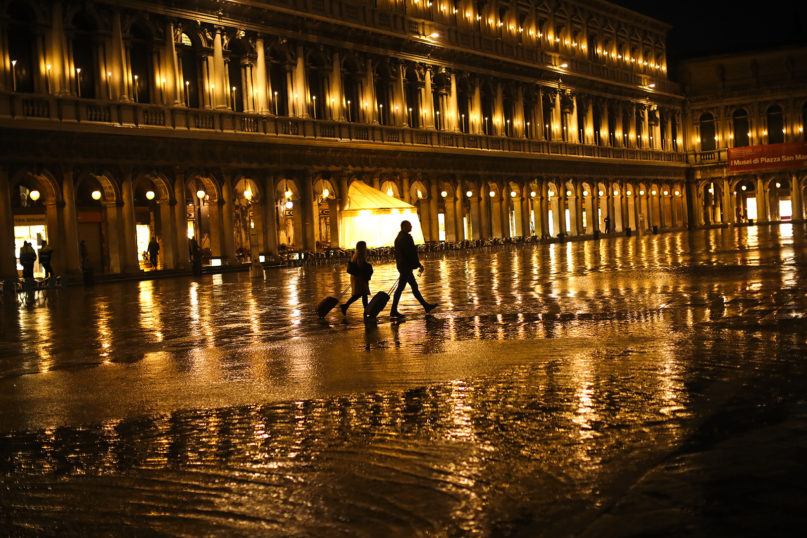 Tourists pull their luggage as they walk through a nearly empty St. Mark’s Square on a rainy day in Venice, Italy, on March 2, 2020. (AP Photo/Francisco Seco)

As my traveling companion, Susannah Black, pointed out in her recap of the Carnevale shutdown for Mere Orthodoxy, the notion of quarantine has its origins in medieval Venice, when ships rumored to be bringing the Black Death were required to wait in port 40 days before entering the city. To see Venice brought low by the coronavirus panic was to be reminded of how quickly we can go from a functioning, seemingly “modern” group of people for whom sickness is something under our jurisdiction to a society characterized by magical and totemic thinking.

Our reaction to the coronavirus threat at the personal level — our desire to stockpile hundreds of dollars’ worth of hand sanitizer (less effective than soap and water), or to leave places where there is no reported threat — is also a statement about our need for control: our bodies, our world.

That’s what makes the mere possibility of sickness and death that now dominates our news cycle so strange: It reveals precisely how incorporeal, and disengaged, our daily lives tend to be. It’s something we liturgical Christians feel fleetingly as the ashes are pressed onto our foreheads once a year, a wobbly kneed quickening in the face of mortality that vanishes almost as soon as we totter back out through the church doors.

The statements about mortality we make on Ash Wednesday (and, indeed, through Lent) are only shocking because they have virtually vanished from the rest of our cultural consciousness. We forget that we are mortal bodies — indeed, that we are mere bodies at all: that our flesh is not something, through judicious diet and detox teas and expensive exercise classes, that exists purely under our own willed jurisdiction. Wellness, health — in our late-capitalist society, they are things that we can pay for, or dedicate time for (which, under capitalism, amounts to roughly the same thing).

This Ash Wednesday service in Rome, where we reflected upon our own mortality, the temporary quality of our bodies, was all the more intense by contrast. That the church remained open at all — Roman churches and tourist sites are currently open — was itself a stark contrast to the enforced closures of Northern Italy.

Although the coronavirus was not mentioned in the sermon, the reminder that the Christian faith carries with it not simply an acknowledgment of the inevitability of death but also the promise of a bodily resurrection was all the more astounding and all the more seemingly out of step with an era in which our bodies are sacrosanct and in which sickness is seen as such an alien part of the human condition.

As one tweet put it — the coronavirus may have a 2% fatality rate. But being alive has a fatality rate of 100%.