(RNS) — A proposed plan to split the United Methodist Church is on its way to the denomination’s top court to decide whether the legislation that would implement it is constitutional.

If the Judicial Council rules the plan is constitutional, delegates could take up the proposal, called “A Protocol of Reconciliation and Grace Through Separation,” at the United Methodist General Conference May 5-15 in Minneapolis.

The protocol was announced in January and later written into legislation — after the deadline had passed to submit legislation for consideration by the General Conference.

But the denomination’s rulebook, the Book of Discipline, allows legislation to be submitted later if it originated at an annual conference session held between 230 and 45 days before General Conference. Other petitions also can be allowed at the discretion of the Committee on Reference, it says.

Over the past month, three regional United Methodist annual conferences have approved measures to send the protocol to the General Conference for a vote. 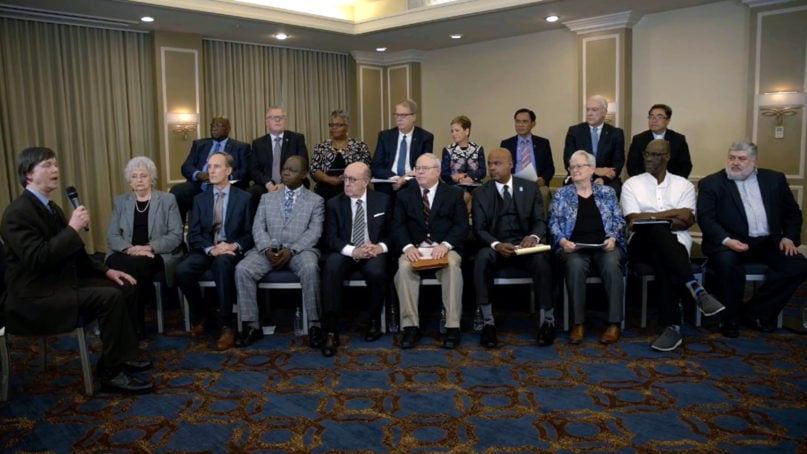 Members of the unofficial group of United Methodist bishops and advocacy group leaders who negotiated a proposal to split the denomination spoke about the process Monday, Jan. 13, 2020, on a live-streamed panel hosted by United Methodist News Service. Video screengrab via UMNS

Over the weekend, annual conferences in Michigan and Sierra Leone voted to pass along the protocol. The Philippines Annual Conference Cavite previously had approved sending the protocol to the General Conference.

Both the conferences in the Philippines and Sierra Leone also endorsed the proposal to split.

“It is significant in our global church that this legislation is being sent to the General Conference by conferences in Africa, Asia, and the United States,” Michigan Bishop David Bard told the Michigan Annual Conference.

On Wednesday (March 11), the United Methodist Church’s Council of Bishops announced it had asked the Judicial Council to decide whether proposed legislation implementing the protocol is constitutional. The court’s spring meeting runs April 29-May 2, just before the start of the General Conference.

The proposal, negotiated by 16 United Methodist bishops and advocacy group leaders from across theological divides, would create a new conservative “traditionalist” Methodist denomination that would receive $25 million over the next four years.

Some already are envisioning what that denomination might look like. A group of United Methodists who identify as “traditionalist” — convened by the Rev. Keith Boyette of the Wesleyan Covenant Association and Patricia Miller of the Confessing Movement, both part of the protocol’s negotiating team, and Bishop Scott Jones of the Houston Episcopal Area — recently met in Atlanta to discuss a proposed “Wesleyan Methodist movement.”

Calls to split one of the largest denominations in the United States have grown since last year’s special session of the United Methodist General Conference approved the so-called Traditional Plan strengthening the church’s bans on the ordination and marriage of LGBTQ United Methodists.

Progressive and moderate United Methodists have vowed to resist any enforcement of those bans.

So far, plans for the General Conference, which draws 862 delegates and other United Methodists from all over the world, have not been impacted by the spread of COVID-19, what’s commonly referred to as the coronavirus.

But the Executive Committee of the Commission on the General Conference is keeping a close eye on recommendations from the World Health Organization and the Centers for Disease Control and Prevention regarding travel and planning large events, according to a news release. The committee also plans to cooperate with the Minnesota Department of Health and Minneapolis Convention Center.

“We will be developing health and wellness related protocols for the meeting site, including promoting preventive measures that attendees can take such as hand hygiene and respiratory etiquette,” said Kim Simpson, chair of the Commission on the General Conference.