“Everybody, wave to the right,” Donald said.

In response, the hundreds of people at the Calvert Drive-in Theatre in Calvert City, Kentucky, turned to their right and waved to the people sitting in the cars next to them.

There was a smattering of honks in place of applause between songs like “Power in the Blood” and “Victory in Jesus” and some prolonged blasts to express appreciation for Kentucky Gov. Andy Beshear and the owners of the theater. Worship leaders bundled in winter coats stood six feet apart from each other beneath the blue awning, and a deacon in a yellow safety vest led prayers.

“What a sight!” Donald said as he looked out across the cars parked at the theater. The church later counted 134 in aerial photos.

“The church has left the building.”

The Calvert Drive-In Theatre has hosted two weddings and a number of concerts, Donald said.

But it hadn’t hosted a church service until Sunday (March 22), when Pathway Baptist Church — like so many others across the United States — was forced to get creative amid social distancing precautions put in place to slow the spread of COVID-19, the disease caused by the novel coronavirus. 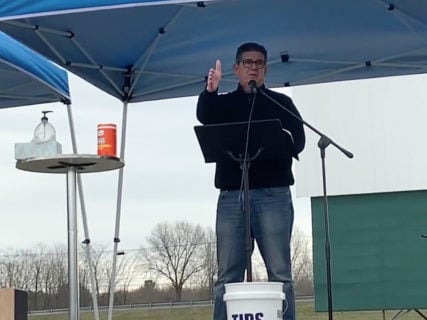 Some drive-in theaters — a fad in the 1950s but more recently seen as novelties — are reporting a swell of popularity during the pandemic as people look for entertainment that gets them out of their houses but also keeps them a safe distance from others.

And Bob Kemp-Baird, pastor of the Daytona Beach Drive-in Christian Church in Daytona Beach, Florida, told Christianity Today he’s been getting questions from churches across the country interested in bringing the past to their present situation.

“Churches are trying to find any way they can to gather people together,” Kemp-Baird told the evangelical Christian magazine.

“They’re really feeling from their congregants, ‘we want to come together to worship, but we recognize the health risks. So what do we do?’”

Congregations from a variety of denominations in Kentucky, Texas, Washington and Minnesota are among those taking the drive-in approach at their churches, encouraging members to park their cars on church property and tune in to the service — broadcast on a low-frequency transmitter — on their radios.

And at least one Roman Catholic priest in Maryland has even set up a drive-thru to hear parishioners’ confessions — what some on Twitter have jokingly termed a “dashboard confessional.”

He grew up in Fort Lauderdale, Florida, and remembers churches meeting at drive-ins in the 1970s, he said. He’s familiar with drive-in churches like Kemp-Baird’s in Florida or Robert Schuller’s since-closed drive-in church in Southern California that once boasted the tagline, “Come as you are in the family car.”

That gave him the idea to reach out to the Calvert Drive-In Theatre.

Calvert City is a small town, and, he said, “Everybody knows everybody around here.” That includes the owners of the popular theater, where Pathway was already planning a family night for the fall. 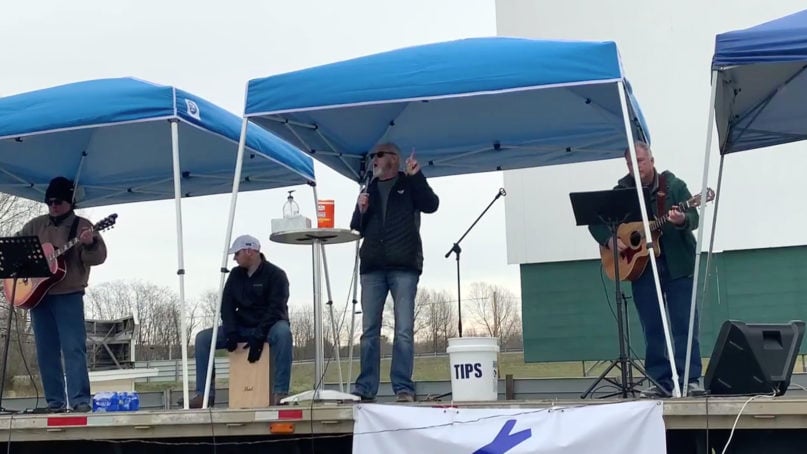 Historically, churches never have run away in fear but, rather, have found ways to gather, Donald said.

Like many pastors across the country, he had livestreamed a service the weekend before from a church conference room for congregants to watch safely at home.

But, he said, “There’s still something to be said about being in the vicinity, in the presence of another believer, and we experienced that. That’s what we experienced that day. Even though there were car windows that separated us, we were gathered as a body of Christ.”

Donald said Pathway hopes to meet at the drive-in again this coming Sunday but will change those plans as needed. The church is paying close attention to guidance from Gov. Beshear, who, Donald said, is doing “a great job.”

RELATED: Is St. Corona the patron saint of pandemics?

Paula Harrington’s husband, John, runs the Calvert Drive-In Theatre. His 108-year-old grandmother, Evelyn, built the theater with her husband in the 1950s and still owns it, she said.

Harrington, a children’s minister at a Church of Christ congregation in nearby Paducah, said they’ve always talked about hosting a church service at the theater.

They never imagined it would be under these circumstances.

Harrington said they thought it was “neat” when Pathway asked to use the drive-in for its service this past Sunday.

But they started to question their decision to make the theater available to the church after hearing about another church in Kentucky that had continued to meet after the governor recommended all churches in the commonwealth cancel services.

The comments online about the church were negative, she said. One visitor at the church tested positive for COVID-19. They worried something similar might happen if people didn’t stay in their cars and respect social distancing during the drive-in service.

Then Beshear was asked during his daily updates on the commonwealth’s response to the coronavirus about churches planning to host drive-in services.

“I believe that this is a creative solution as long as there is the distancing between those cars,” he said. “Again, we want to see creativity. We want to see ways we can continue to connect. But they have to make sure they follow that guidance.” 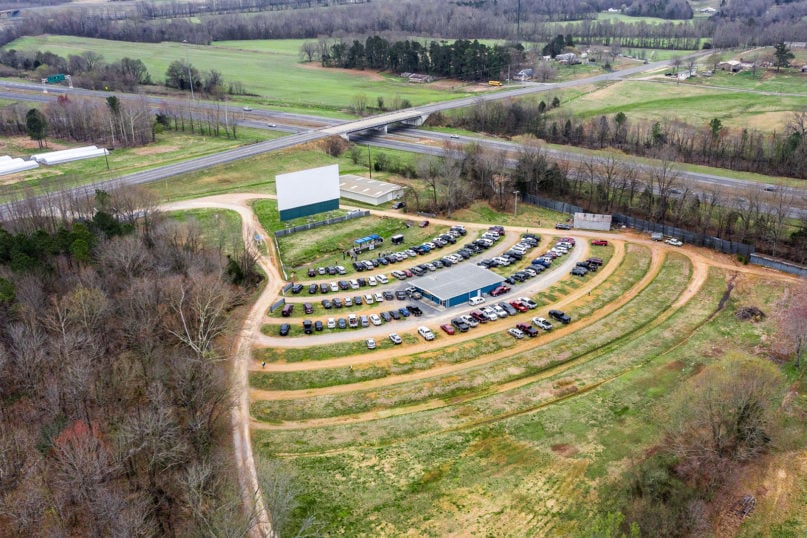 To Harrington’s relief, Kentucky’s commissioner of public health concurred with the governor on live TV.

After that, she said, they were “really excited.”

“It is just so thinking outside the box, and that’s what the church really needs to do. Even though change is so scary, it is imperative that we kind of shift with the times just in order to meet people’s needs,” Harrington said.

During Sunday’s service at the Calvert Drive-In Theatre, Donald said he was asked if Pathway would still be collecting an offering.

“I said, ‘Are we going to have a Baptist meeting?’” he said.

The pastor isn’t sure how much they’ve raised yet — they won’t touch the money for 72 hours to be safe, he said.

Donald preached on the life of Joshua, who led the people of Israel through uncertain times into the Promised Land after the death of Moses.

“Be strong and of good courage; do not be afraid, nor be dismayed, for the Lord your God is with you wherever you go,” God tells Joshua in the Bible.

The pastor urged the car-bound congregation to be courageous and to be “the light to the world,” to check on their neighbors in the midst of similarly uncertain times and find ways to be generous.

He ended his message with what normally would be an altar call.

Instead of calling people to the altar to express that trust, though, he encouraged them to call the church office on the phone. Someone would return their call and pray with them, he said.

It may have been at a drive-in theater, but as Donald noted, it was still a Baptist meeting.