(RNS) — A Muslim-led crowdfunding campaign has raised nearly $500,000 to offer micro-grants to low-income American families whose livelihoods have been hurt by the outbreak of the novel coronavirus.

Facing a “tsunami” of requests for aid, the coronavirus relief campaign has already sent assistance checks of between $250 to $1,000 to more than 660 households across the country, benefitting about 2,100 individuals of all and no faiths.

“We want the country to know that we are a vital organ to society, even though often Muslims are being portrayed as somewhat of a tumor to society,” said Tarek El-Messidi, director of CelebrateMercy, a non-profit that teaches about the Prophet Muhammad’s life and is known for fundraisers benefitting vandalized Jewish cemeteries, Pittsburgh synagogue shooting victims and parents detained in immigrant jails.

“The Prophet Mohammed said the most beloved people to God are those who benefit others most,” El-Messidi explained. “Knowing that so many millions were going to lose jobs, to struggle to make ends meet, to pay rent, to pay bills, to pay for child care, we felt it was an immediate need and we wanted to help alleviate it for as many people as possible.”

By mid-April, White House officials say, most American adults will receive a $1,200 payment from the U.S. government as part of its $2.2 trillion economic relief plan. But layoffs, furloughs, closing businesses and positive COVID-19 tests have already wreaked havoc on Americans’ abilities to keep their homes and put food on their tables. In the past two weeks, nearly 10 million people filed for unemployment benefits, overwhelming states’ employment systems.

With that assistance still weeks away, organizers of the LaunchGood fund rushed to mail checks to applicants — prioritized based on a need-based point system — within days of receiving their requests.

“I’ve tried every resource out there, and this is the only outlet I’ve received any kind of response from,” one grant recipient named Jason said, per a statement from the campaign. “Even the unemployment office hasn’t gotten back to me … when I saw your email this morning, I finally was able to take a long needed deep breath.”

The campaign originally asked for $20,000, but after donors raised over $75,000 within a day, organizers began pushing the ceiling. Still, El-Messidi said, if they were surprised by the donations — coming from over 3,700 individual donors so far — they have been completely overwhelmed by the “shocking” need for aid. 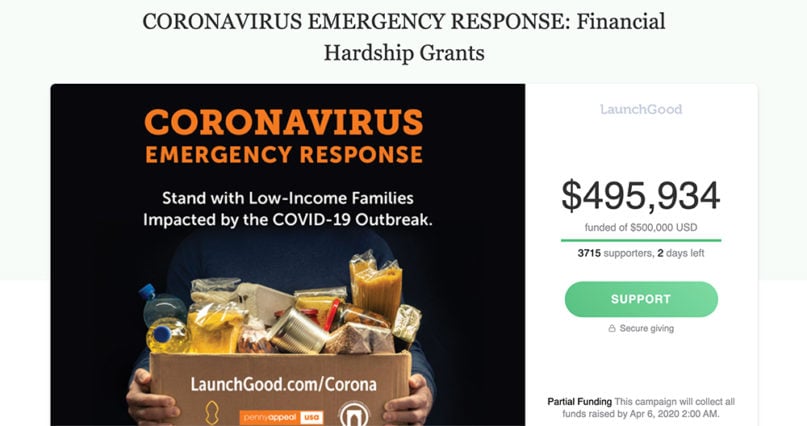 The LaunchGood campaign has nearly reached the $500,000 goal. Screengrab

After receiving approximately 2,000 requests from families all over the country, at a rate of more than 100 applications a day, organizers have paused new applications for financial assistance.

Originally, the group planned to use some funds to send hygiene kits to families and give grants to local aid organizations. But the demand for direct aid was so great, they scrapped those plans. Now, El-Messidi said, organizers are waiting for donations to catch up with the demand.

“We’re now at a point where every day we’re hearing about more people who are ill and are passing away from the illness,” Latif told Religion News Service. “Funeral homes are running on empty, and some are contacting us to ask if we can help purchase more vehicles or send volunteers to help prepare the bodies for the funeral. Doctors and residents at public hospitals are trying to raise money to purchase supplies themselves.”

And if Muslims are in a position to be of service to those in need, he said, “we have a responsibility and an obligation to do that.”

RELATED: Houses of worship pitch in to help those left vulnerable by virus outbreak

Across the country, Muslim communities have mobilized to donate supplies to medical providers, deliver groceries to sick, immuno-compromised and elderly people and to raise funds for Americans struggling to make ends meet during the pandemic.

“One of the stories that we hear around coronavirus in the news is how faith leaders are sometimes contributing to the spread of the disease by still holding services … or preachers saying that the virus can’t hurt you if God doesn’t will it to,” said LaunchGood founder Chris Blauvelt, who worked with the organizations to shape the fundraiser. “What’s not shared enough is how many faith leaders are actually helping lead the containment of the disease or helping flatten the curve. For every mosque that remained open, there were 99 that closed.”

That’s despite critical concerns among many mosques and Islamic institutions about how to secure funding to stay afloat without being able to fundraise at Friday prayers or during Ramadan.

“There’s a palpable fear about, ‘Oh my God, how are we going to get by without being able to fundraise at taraweehs and iftar dinners?’ and that’s expected,” said Blauvelt. “What I wasn’t expecting was how many mosques want to raise money to help people affected by the coronavirus. They’re actually not worried about themselves yet, because they see this immediate need in the community.”

One fund has raised more than $4,000 for the UMMA Community Clinic in South Los Angeles, a Muslim health clinic that is testing for COVID-19, distributing free healthy food packages to those in need and offering telemedicine to patients unable to reach the clinic.

The Muslim-owned Premier Medicine group has opened a COVID-19 testing center and telemedicine hub to allow locals, including the mostly Muslim patients its Dearborn and Hamtramck clinics serve, to seek treatment while maintaining social distancing.

In Illinois, the Zakat Foundation donated thousands of pairs of medical gloves to hospitals, clinics and nursing homes in low-income Chicago-area neighborhoods. In the coming days, it plans to supply more than 100,000 gloves to healthcare providers across the country.

In New York City, members of Muslims Giving Back are bringing meals, largely donated by Muslim-owned food trucks and halal restaurants, and supplies to homeless people and healthcare workers during the lockdown.

The Khalil Center, an Islamic psychological and spiritual wellness organization, has also begun providing free therapy and counseling nationwide during the pandemic.

From Chicago to Greenville, South Carolina, small groups of Muslim youth have mobilized to deliver groceries to elderly and other vulnerable community members.

The Ahmadiyya Muslim Community USA’s youth organization has assisted more than 1,300 households by delivering groceries and providing other services to those in need. The group is also facilitating blood donations, and its relief organization, Humanity First, has served more than 8,000 meals in the past two weeks and distributed about 300 hygiene packs for family care.

Pillars Fund has opened up applications for small $500 grants for Muslim artists and activists whose livelihoods have been destabilized.