(RNS) — About two weeks ago, facing imminent gathering bans, my partner and I eloped with 20 hours’ notice, marrying in Central Park with our priest and two close friends, standing 6 feet away, serving as witnesses.

The decision, I’ll admit, had something to do with the way that life has changed here in New York, indoors, where life consists almost entirely of writing and Zooming with family and friends — my mother, halfway across the world, in the morning; college friends in the U.K. in the afternoon; friends who live a block or two away in the evening. Things move at once quickly and profoundly slowly.

But it was less impulsive or lockdown-driven than it may sound. We had already planned for a quiet elopement at some point later this year, and, had we been married in our church, we would have been restricted to just two witnesses and our priest present anyway. The lockdown only made us so much more aware of our dependence upon, and our fellowship with, people we might once have thought of as strangers.

Marrying in the park in the middle of a quarantine, we inadvertently found ourselves something of an attraction for all of New York City, as spectacle-starved people, taking a moment outdoors to walk their dogs or jog or stroll stopped — at a safe social distance — to watch the ceremony.

Old women cried out “mazel tov.” Someone clapped while jogging without once breaking her stride. Golden retrievers off leashes bounded onto the lawn where we held our impromptu. Someone played Mendelssohn’s Wedding March for us on their phone. When the priest asked our witnesses, as is custom, whether they would help and support us in our marriage vows, what seemed like half the city responded with “we will.”

It is possible, of course, to read such an event as merely an aesthetic phenomenon — a bunch of bored, lonely New Yorkers looking for a good story to put on their Instagrams in the middle of a global pandemic. But, dazed and delirious, trying not to stammer through my vows, I found in these strangers’ presence something else: a sense that community — a localism born of our sense of bonds to one another — was at the heart of our collective sense of survival. 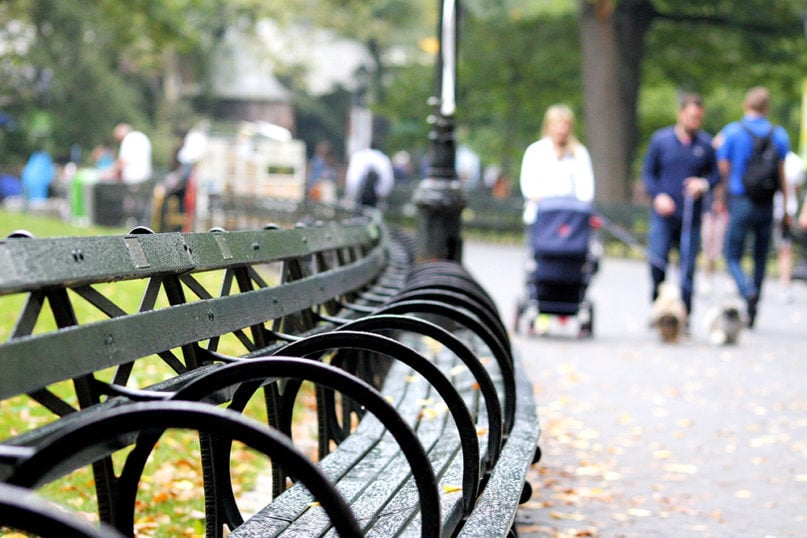 It is a strange thing to be married in the midst of a pandemic — stranger, too, to be married unexpectedly. The ontological change that I believe takes place in marriage is an uncanny mirror of how, as I wrote a few weeks ago, we are more broadly dependent upon one another.

The sacrament of marriage, at least in the Christian tradition, is about the blurring of the boundaries of the self. In becoming one flesh, as we are called to do, we abandon any pretense that we are fully autonomous individuals, at least in the sense that modern liberalism understands it. Among the most affecting prayers that our priest read over us — part of the Book of Common Prayer’s marriage rite — is that God “grant that their wills may be so knit together in your will.”

The idea that we not only accept, but long for, pray for, wills that are not our own, is at the heart of my understanding of both Christianity and marriage. We joyfully enter into an encounter with another human being — someone other, someone who is emphatically not simply an extension of our own selves, but rather an irreducible subject in their own right — and allow that encounter to transform us, to help us learn to love better. To do so demands, by definition, that we knit our will to the will of another human being, and of God.

It was a kind of presence that was both akin to and separate from the digital space we reentered after the ceremony was over and we had gone back to our apartment, when we got back on Zoom to tell our friends and family of our marriage. We were, in both spaces, contingent upon both one another and the world around us: no less socially bonded to the people we loved for announcing the news over a webcam.

But the awareness, in Central Park, of what presence meant — the care with which we opened a cab door, with which we avoided strangers, with which we waved from a distance, with which we provided our witnesses their own pens to sign the marriage license or with which my now-husband caught the bouquet thrown by one of our witnesses, who had brought it as a surprise gift for me and who could not hand it to us directly — was distinct to physical space. Just being there, together, made us vulnerable: to one another and to the world around us.

It is true, I think, in every marriage rite. But ours made that particularly clear.

Ahead of the Trend
‘God-denying’ women and self-replacing Christians: How religion changes birthrates
Follow us on Facebook!
Submit your photos to RNS