(RNS) — Five years ago, I wrote a column in which I admitted that I hate Holy Week. “I know I should be getting more out of it,” I wrote, “but I find myself daydreaming or dozing off during the services.”

This Holy Week is going to be different. This year the suffering and death of Holy Week have become too real. Experts are predicting a peak in COVID-19 emergencies that could overwhelm hospitals. Those who are not sick are huddled at home as if in fallout shelters. And just as I need Holy Week services more than ever, social distancing measures will prevent me from attending.

Holy Week begins on Passion Sunday (aka Palm Sunday), with readings from Isaiah, Psalm 22, the Letter to the Philippians and the Passion according to Matthew’s Gospel.

The Isaiah readings, which continue through the week, are from the “Suffering Servant” passages that portray the troubles and isolation of the just person who is persecuted and reviled. He seems foolish for trusting in God, who does not come to his rescue.

Yet, despite these sufferings, the servant is commissioned by God to be a light to the nations, to open the eyes of the blind and to bring prisoners from confinement. The servant suffers because he tries to establish justice on the earth.

These passages are seen by Christians as representative of the mission and experience of Jesus. He accepted the mission of his Father and suffered for it.

How anyone can believe in the “prosperity gospel” after reading these passages is beyond me. It is clear that God’s chosen do not always live lives blessed by riches and good health. Rather, their faithfulness is shown in adversity.

The suffering servants today are the doctors, nurses and caretakers who are risking their lives, getting sick and dying after ministering to those who are sick. Their faithfulness and commitment are extraordinary. They are truly laying down their lives for others. 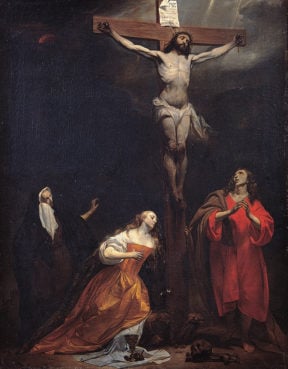 “Crucifixion” by Gabriel Metsu, circa 1665. Image courtesy of Creative Commons

Psalm 22, recited many times during Holy Week, reflects the feelings of the servant of God during adversity: “My God, my God, why have you forsaken me?”

How many people suffering or dying alone today must identify with these words. That Jesus echoes them from the cross shows that he truly suffers as we do, both physically and spiritually.

“Christ Jesus, though he was in the form of God, did not regard equality with God something to be grasped,” Paul tells the Philippians. “Rather, he emptied himself, taking the form of a slave, coming in human likeness; and found human in appearance, he humbled himself, becoming obedient to the point of death, even death on a cross.”

My principal problem with Holy Week came from an impoverished theology that presented Jesus as dying for my sins. I don’t think I have ever done anything so bad that I would deserve to be punished by death.

The idea that Jesus would have to be crucified for my sins seems obscene. It might make him look heroic, but it makes his Father look like a sadist. Balancing the scales of justice should not require such suffering.

Today, I see the Crucifixion in a different light. Today, I see the death of Jesus a consequence of his commitment to the mission given to him by his Father, to preach the good news of God’s love for us and our need to respond by loving one another, especially the marginalized.

Jesus was killed because of what he preached, not because his Father had to be appeased. Jesus is in solidarity with all those who died for justice and human rights.

In a sense, Jesus dies not because of my failings but because of God’s. God created a universe in which suffering and evil are inevitable. God cannot protect the innocent; he cannot save us from death and suffering.

The Bible does not give us a good explanation of evil and suffering in the world. But instead of giving us excuses, God became human and became one with us in our suffering and death.

The Crucifixion is God’s way of saying, “I’m sorry. I am with you.”

If we have to bear it, so will he. Rather than just sitting at the sidelines and cheering us on, God joins us in the struggle against evil and suffers with us.

The Crucifixion is the sign of God’s love for us, but not by forgiving us our sins. The Father does not need the death of Jesus to make him forgive. He already wants to forgive us.

The Crucifixion is the logical consequence of the incarnation. God decided to join us and take the consequences, be what they may. The Crucifixion is God’s way of getting our attention and telling us, “Despite all the evidence to the contrary, I am with you. I love you.”

But Holy Week is incomplete without Easter. The Crucifixion cannot be understood without the Resurrection, God’s sign that evil and suffering cannot have the last word.

He joined us in our suffering, and now he wants us to join him in everlasting life.