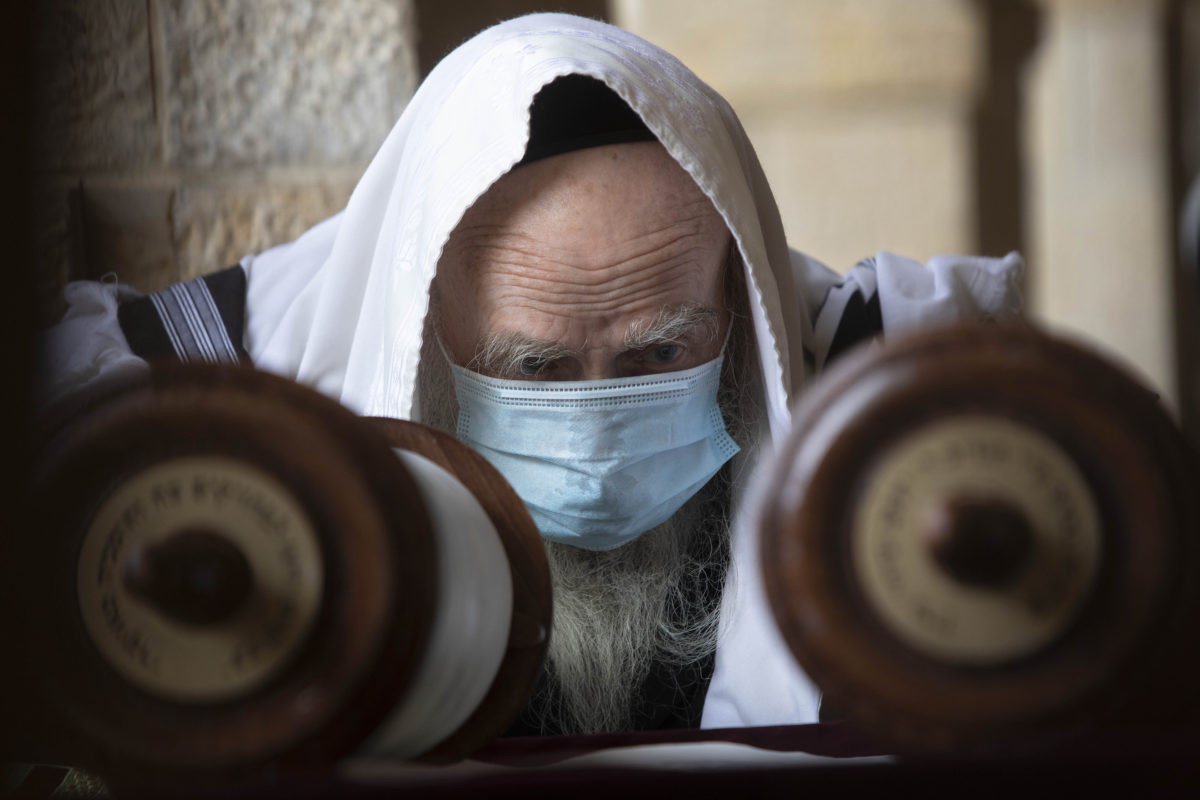 A Jewish man wears a face mask to curb the spread of the coronavirus as he reads from a Torah scroll at the Western Wall, the holiest site where Jews can pray in Jerusalem's old city, Friday, April 10, 2020. (AP Photo/Sebastian Scheiner)
April 15, 2020
Jeffrey Salkin

Here it is – a fifth question for the end of Pesach.

When did God decide that it was time to redeem the Israelites from Egyptian slavery?

The contemporary rabbi, Herbert Bronstein, taught in the pages of the Reform "Baskin Haggadah": When God saw that the Israelites had become accustomed to their sufferings, the Holy One knew that it was time to redeem them.

In other words, the Israelites had simply come to believe that their enslavement was normal.

If I hear the phrase "the new normal" one more time, I will scream.

No. This is not normal – and may we never accept it as such.

These last few weeks have turned out to be a test for synagogues.

Do we have the ability to rapidly re-create our way of doing business?

The short answer is: Yes.

Within days, synagogues moved their services onto Facebook. Educators moved classes for children and adults onto Zoom. Rabbis have channeled FDR’s fireside chats, and have created online presences – some, on a daily basis. They have stretched themselves, and stressed themselves.

Our members have been good sports about this. Consider how many synagogue members are over “a certain age.” The most they could do was Facebook; maybe LinkedIn; probably a Skype call with the grandchildren.

A month ago, there were a great many Jews, especially older ones, who had never heard of Zoom. Today, they have become adept at a technology that they had never had the urge or need to learn. It shows what we can learn if we need to. And it shows how forgiving our people have been; they do not expect presentations that are professional in quality. It turns out that sometimes, you really can get an "A" for effort.

In short, synagogues have proven their resilience and relevance. They have done so, in the most important way possible. Synagogues matter to people.

But, now comes my fear.

I worry that the phrase “who shall live and who shall die” will not only, horrifically, apply to individuals.

I worry that the phrase will also apply to synagogues.

The COVID-19 crisis has reminded us of the social Darwinism that lies beneath the American dream.

I worry that there will be a synagogue social Darwinism, as well. Large, well-endowed, wealthy synagogues will survive. The smaller ones could be in danger. Members who are out of work; less money; a lesser safety net, even with various government programs -- it is a very frightening time.

What else endangers the American synagogue?

As usual, Jewish ennui – nothing new, but now existential.

Around the country, university officials are worried: even with virtual learning options, come autumn -- will their students return?

Synagogues are asking a similar question. Come autumn, will their "students" return?

I worry about those synagogue members who have been on the periphery.

They might say to themselves: "I only go to synagogue twice a year. This year, I cannot even do that. Well, sure, the synagogue will come to me over WiFi. But, do I really need this? Is this really worth my money? And if I have a sudden urge for a worship service, there are hundreds that I can sample.”

Or, they might say to themselves: “Hey, I only go to synagogue twice a year. This year, I cannot even do that. I could drop out.

“But, my synagogue was there for me, if I wanted it to be. My synagogue did everything possible."

“My synagogue could only do that because it exists -- because it has a professional staff and a structure."

"That means that I have a moral responsibility to the Jewish community. If I drop out, and if fifty families like me drop out, this synagogue could disappear, like the pizza joint in the shopping center.

"If synagogues disappear, this will be a mortal blow to American Judaism.

"I am hanging in there with my synagogue.”

I am counting on, and praying for, the second response.

Without synagogues – without community, however defined – there is no more American Jewish religious life.

The sociologists have been wondering about this for decades; now, the epidemiologists will help frame the conversation. When they speculate on when America will be "open for business" again, they are also speculating on when the synagogues will be open for business again. It is a crucial question.

Go back through Jewish history. No catastrophe in Jewish history has threatened the synagogue as an institution. Yes, our enemies destroyed our synagogues out of their hatred. We simply cannot allow Jews themselves to do the same thing, out of their apathy.

It is time for American Jewish leaders to send forth the message: American Jews have a moral obligation to support their synagogues.

I end with the following parable. Two men were on a boat, and one of them took an awl and started boring a hole beneath his seat. His friend said to him: “What are you doing? You are going to flood this boat. We will drown!”

To which his friend responded: “Hey, what are you worrying about? I am only making a hole beneath my seat!”

All American Jews are now in the same boat. If we puncture the space beneath our communal seats, we all drown.

This is perhaps the greatest test that American Jews have ever faced. Can we conquer our consumerist attitudes towards the synagogue? Can we demonstrate that we are truly a community of meaning?

I am betting that we can. The American Jewish future depends on it.

September 3, 2020
Related Posts
By Yonat Shimron
Ruth Bader Ginsburg, who died Friday, was shaped by her minority faith
By Bob Smietana
An Idaho pastor landed in ICU with COVID-19. His church plans to reopen this week
By Yonat Shimron
The ‘chai’ charm that keeps this secretary of health grounded in the value of life
By Michele Chabin
Second coronavirus lockdown in Israel frustrates many religious Jews’ plans for High Holidays
By Jeffrey Salkin
COVID has led us all into sin