(RNS) — With mosques’ biggest fundraisers of the year in jeopardy, a new crowdfunding initiative led by four prominent Muslim American leaders aims to protect the livelihoods of imams and other mosque staff around the country.

The initiative has raised about $155,000 as an emergency stopgap measure to maintain mosque staff’s income. The funds will be distributed to mosques and Islamic centers that apply for assistance in one-time grants ranging from $5,000-$10,000.

“We started hearing that some of our colleagues were being let go or furloughed, and that some of these masjids (mosques) may even shut down,” said Webb, who works with the Islamic Center at New York University. “The masjid and imam are central to Muslim life. Mosques provide a sacred place to worship, while imams facilitate the worship and provide valuable leadership and religious instruction.”

All four imams said they have seen some of their colleagues being left without adequate incomes to provide for their families due to stay-at-home orders and shutdowns of gatherings across the country.

“These are the people who are leading our community, and we should be doing everything we can to help them out,” said Muhi Khwaja, co-founder of the American Muslim Community Foundation, which LaunchGood partnered with to collect and distribute the funds.

“It’s unfortunate that some staff have already had to be furloughed, let go or have their salary reduced significantly,” Khwaja said. “And it’s not only imams. There are thousands of Sunday school teachers, youth directors and other staff who can use these funds as well.”

So far, Webb said, the problem is not severe. Through grants like this, organizers hope to keep a crisis at bay and prevent the need for a larger-scale solution.

“Until now I haven’t seen this as an acute issue, but it’s enough that religious leaders and others have reached out to us,” Webb said. “One of the things we try to do as a community is get in front of issues proactively and not wait for them to worsen.”

The holy month of Ramadan is marked as a time of daily dawn-to-sunset fasting and spiritual discipline: from food, drink, sexual activity, anger, gossiping and any sinful activities.

But it is also a time of heightened charity and generosity.

Muslims often use the month as a time to pay their annual zakat, the obligatory almsgiving in proportion to one’s wealth. Islamic scholars in the U.S. are also increasingly interpreting Quranic guidelines on zakat’s beneficiaries to include mosques, Islamic schools and Muslim nonprofits.

Mosques typically rely on donations collected during Friday prayer services as well as nightly fundraisers during Ramadan. With the doors to these physical spaces closed, many mosque administrators have been left wondering how to keep up with monthly operational costs while also paying staff. 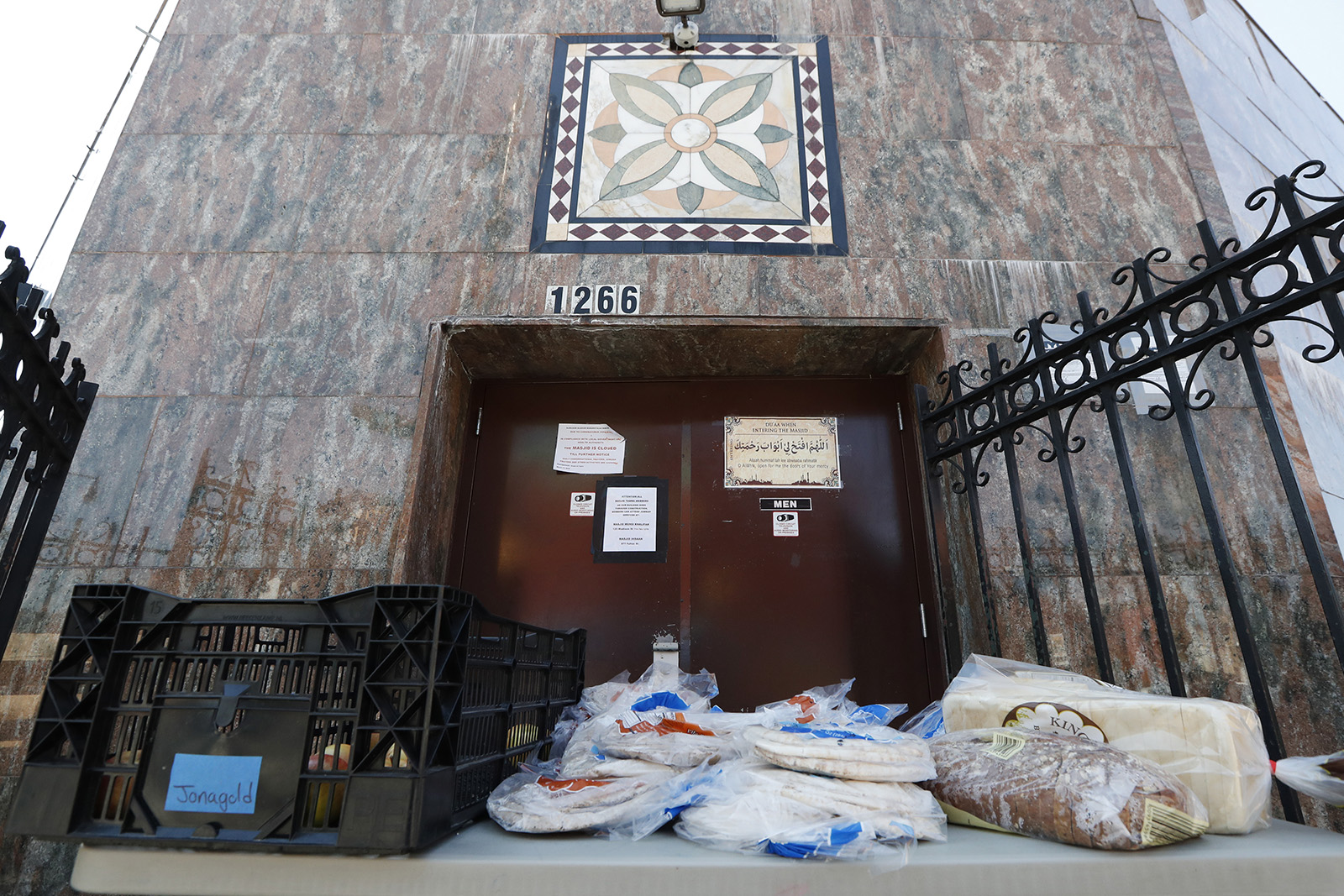 Packages of bread and a crate of apples sit on a table for passersby to take, outside the closed Masjid at-Taqwa mosque on March 26, 2020, in the Brooklyn borough of New York. The mosque is closed, as are other houses of worship, during the coronavirus pandemic after the government banned large gatherings to help reduce the spread of COVID-19. (AP Photo/Kathy Willens)

Donations made during Ramadan comprise not only week-to-week funds needed to survive, Webb pointed out. For smaller mosques and nonprofits, the donations can provide the entire annual budget.

Muslims must not neglect their clergy and spiritual institutions, particularly mosques in underprivileged communities, during times of crisis, Qadhi told Religion News Service.

“Most mosques in America are already struggling financially, and many people who work for mosques — clergy and staff — are underpaid and overworked as it is,” noted Qadhi, who leads The Islamic Seminary of America. “Many have chosen these professions and careers not for the sake of financial rewards but for the benefits of giving back to their communities.”

With doors to religious institutions closed, and Americans facing unprecedented levels of unemployment and other financial strains, such charitable giving has already taken a hit.

While a state-to-state debate continues about whether religious institutions should be considered “essential” services and some pastors have made headlines for continuing to hold in-person services, most mosques have been shut down since the earliest stay-home orders were issued, meaning they have also lost weeks’ worths of funds they usually collect on Fridays, Webb said.

“Most mosques across the country were some of the first religious institutions to say ‘we’re shutting down,’” Webb said. “Because that’s something in the ethos of Islamic law, that prevention is better than cure.”

Through countless requests for donations over email chains, WhatsApp groups and GoFundMe pages, Muslim communities have sought to plug these gaps over the past few weeks.

Some have been successful. A GoFundMe campaign for the Islamic Society of New Hampshire, for example, exceeded the $6,000 necessary to cover its monthly rent and utilities costs, typically covered by donations made during Friday prayers.

But most likely, not all these individual initiatives are properly accounted for and tax-deductible, organizers say, nor are all the donation requests whizzing through social media legitimate.

The LaunchGood initiative was meant to formalize the process of donation, ensuring all donations were eligible both for tax deductions as well as for zakat purposes.

Organizers also encourage all qualifying mosques and Islamic centers to apply for the Small Business Administration’s forgivable loans, part of the Paycheck Protection Program to incentivize businesses to keep their staff employed. The agency says nonprofit and faith-based organizations are eligible for the funds.

LaunchGood CEO Chris Blauvelt said the dozens of Muslim-led coronavirus charitable campaigns on the website counter the popular narrative of religious communities’ contributing to the spread of the disease by continuing to hold in-person services.

“For every one or two outliers out there, there are literally thousands of people that are putting their money where their mouth is and showing their values in action,” Blauvelt told RNS. “That’s true of the Muslim community and I think you’ll find that across other faith groups as well.”

The fundraiser partnered with several Muslim American charitable organizations, including Islamic Relief USA, Mercy Without Limits, Zakat Foundation of America and more. The project has also been supported by leading Muslim American organizations such as the Islamic Society of North America, the Muslim Public Affairs Council and Muslim American Society.