(RNS) — Monday, May 4, was the 50th anniversary of the Kent State shootings. Thirteen students were shot and four killed by the Ohio National Guard during a Vietnam War protest after the invasion of Cambodia. On that day, I was a student up the road at Michigan State University, helping lead Vietnam protests there. It all felt very personal. It still does.

We were young, and so were the students who were killed — two 19 and two 20. Allison Krause, Jeffrey Miller, William Schroeder, and Sandra Scheuer, two protesters and two observers on the way to class, were killed when Guardsmen opened fire on unarmed young civilians.

Here was a senseless war — which we as young people were asked to fight in and in which many of our friends were losing their lives — and we decided to question it. After investigating the history of Indochina and stated reasons for war from the administration, we came to the conclusion that the Vietnam War was based on lies.

Or as a protest banner from the soldiers who saw the brutalities in Vietnam firsthand put it, “The Whole Damn Thing Was A Lie.” Our government leaders distorted the truth to justify a deadly battle that was fought for geopolitical and ideological motivations. 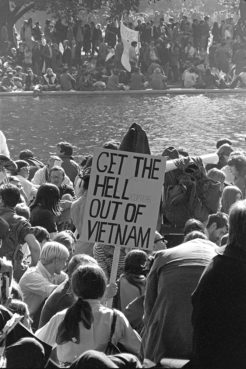 Lies kill — and the war in Vietnam killed lots of young Americans from my generation: 58,220 of them, along with 304,000 others with physical, mental and psychological damage that many would carry for the rest of their lives. Two to three million Vietnamese were killed — the majority civilians. Black casualties were disproportionate in Vietnam. And before Kent State, protesters at black colleges were fired on and killed in Orangeburg, South Carolina, and at Jackson State in Mississippi two weeks later, but neither garnered the same media attention.

Exposing lies has always gotten black people killed in America, but this time white students also spoke out, only to become “four dead in Ohio,” as the famous Crosby, Stills, Nash, and Young song goes. And we now know that the American leaders who fought the war and sent my generation over there kept sending thousands more of us long after they realized that the war couldn’t be “won.”

Having experienced all of that history, I should have known how hard it would hit me when the death toll from the coronavirus surpassed the death toll in Vietnam — in only two months compared to nearly 20 years. I began to count the unadmitted mistakes and lies about the deadly virus, from China to the White House.

Lies still kill people. Today we see similar patterns of lies as we saw 50 years ago, deployed similarly to make massive levels of death and suffering more palatable to the public and shield government leaders from accountability. Consider all the lies Donald Trump has told about the pandemic from the outset and the lives they have undoubtedly cost, from repeatedly ignoring early warnings and internal briefings about the potential pandemic to continually underestimating the number of people who could suffer.

Taking the pandemic with the seriousness it deserved from the start and urging the American people to do the same could have saved thousands of lives.

And, as was the case in Vietnam, the cost in lives that has been paid in this pandemic — as well as the cost going forward — is borne disproportionately by people of color and/or people in the working class. The statistics have made that clear. In the Vietnam era, we saw this play out as the overwhelmingly white, wealthy and well-connected were able to avoid the draft. Of course, Trump was among them, avoiding going to Vietnam because his family could get a doctor to say he had “bone spurs” that would prevent him from fighting. 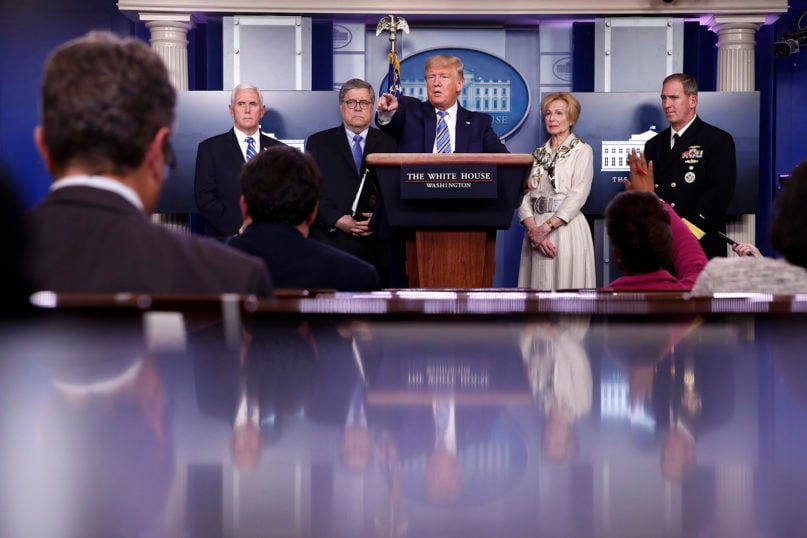 President Donald Trump takes questions from reporters as he speaks about the coronavirus in the James Brady Briefing Room on March 23, 2020, in Washington. (AP Photo/Alex Brandon)

Today, those with the most privilege have greater ability to “Stay Home,” are much more protected from contracting the virus, and receive much better care if they do contract it. The wealthy elites that support Trump’s reopening of the economy they benefit from have the means to protect themselves from the associated risks.

Who will bear the cost in cases where state and local leaders — influenced and bolstered by the president’s urging — reopen in ways that are not safe, risking a new surge in infections and deaths? Working people will face the impossible choice of going back to work and losing access to unemployment benefits if they refuse to do so. Should life or livelihood ever be a choice?

Once again, people of color and working class people of all races have been and will be most vulnerable to contracting the virus if new surges happen in the wake of reopening, and, as we’ve written before, these same people will be at greater risk of dying due to the health disparities that structural racism and economic inequity have already created.

During Vietnam, we sacrificed a generation of young men, overwhelmingly from disadvantaged backgrounds, to the hubris of our leaders. It’s hard not to feel that this is exactly what’s happening again and what could happen on an even more massive scale if we don’t keep the spread of the virus under control.

If the cheerleader in the Oval Office succeeds in forcing reopenings sooner than is safe, it will be felt most by the vulnerable: the elderly, people of color and low-income people, particularly those in densely populated areas, living situations or closer work situations. But this president has always been a gambler, and this time he’s gambling with people’s lives.

It is a fair question to ask: Who is most likely to be sacrificed on the altar of economic prosperity and the president’s reelection campaign? Whether this is conscious intent or the usual implicit decision-making process (or both), this will likely be the impact of the policy choices and outcomes in response to a disease that has become racially and economically disproportionate.

Ironically, the song playing during Trump’s visit to the Honeywell plant in Arizona this week was: “Live and Let Die.”

News
A mask mandate showdown in Cobb County school board pits ‘faith’ against ‘fear’
Follow us on Facebook!
Submit your photos to RNS