VATICAN CITY (RNS) — In Rome and at the Vatican, the death of George Floyd and the protests in the United States inspired anti-racism vigils and prayers over the weekend.

“Today is a day when the American community and not only that but the whole world should come together to seriously examine where as a world, as a people, we are all going,” said Cardinal Kevin Farrell, the head of the Vatican department for Family, Laity and Life, speaking to a group of reporters ahead of the vigil for George Floyd on Friday (June 5).

RELATED: Amid mounting protests in the US, Pope Francis calls for unity in diversity

Floyd, a black man, died in police custody on May 25, and the viral video of his death has sparked protests and marches throughout the United States and the world to oppose systemic racism. In Rome, at the Basilica of St. Mary in Trastevere, the Catholic lay movement St. Egidio organized a vigil for Floyd with the participation of high-ranking Vatican prelates.

Farrell told reporters, including Religion News Service, that though many “know all the theory and can quote all the great speeches” regarding the plague of racism, few are willing to do what needs to be done.

“We are all the same human people and therefore I believe it’s very important that we stop all this division and we stop the rhetoric of hatred that exists sometimes in our speech,” he said. 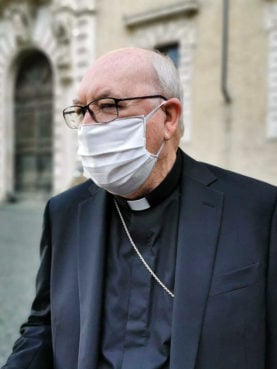 Farrell was the auxiliary bishop of Washington D.C. between 2001 and 2007 and voiced his dismay at the news that amid the mounting anti-racism protests, the White House has erected over a mile of security fencing.

“To see barricades around the White House is something I never experienced in all the years I lived in Washington. I don’t find that acceptable. I think it’s a terrible image for the United States to have,” he said, adding that the United States is “supposed to be the leader in tolerance.”

A large crowd gathered for the vigil while respecting health and safety measures, including the head of the Vatican department charged with safeguarding life, Archbishop Vincenzo Paglia, and foreign representatives to the Holy See.

The U.S. ambassador to the Holy See, Callista Gingrich, and her husband and former Speaker of the House, Newt Gingrich, also attended. The ambassador praised the organizers for the “beautiful service” in memory of Floyd and in support of the United States.

“We just want to express our appreciation for this very important person,” Gingrich told RNS, referring to Floyd, adding the importance of presenting “a message that is reconciliatory.”

The service began with a prayer for “the just man” George Floyd and his family as well as for “the end of all violence in the United States” so that “all racism will be defeated and justice reaffirmed.”

During his homily, Farrell pointed to the “distorted way of thinking” that can sometimes lead Christians “to identify with only one side, distancing ourselves from those who belong to the other side.

“In doing so, we completely lose sight of the universal dimension of Christ’s message or even end up identifying our Christian faith with the ideological vision of the side we have embraced,” the cardinal said.

In this difficult context, he continued, Christians are called to promote harmony and reconciliation and avoid partisanship by returning to Jesus’ gospel teachings. Instead of fueling “anger and frustration,” people of faith must promote “a culture of respect,” the cardinal said.

“Offensive words and gestures of contempt, looting and violence lead to nothing good for the future,” Farrell said. “For this reason we Christians must not hide in fear. On the contrary, precisely in these delicate moments of social tension we must be present to address the just desire for equality, respect and justice that is present in the hearts of so many men and women.”

St. Egidio has also organized a flash mob in Rome on Monday (June 8), where Catholic youth will gather to “oppose any form of racism, social discrimination and violence” and adhere to the Black Lives Matter movement, according to a press release issued by the Catholic movement.

RELATED: Pope Francis condemns ‘sin of racism’ while promoting nonviolence as protests mount in US

Vatican Media outlets, Catholic faithful and Pope Francis have drawn attention to the importance of combating racism and voiced support for Floyd and his family since the protests began in the United States. 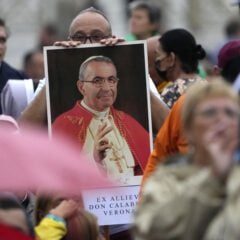 Religion Hub
John Paul I, briefly serving, ‘smiling” pope, is beatified
Follow us on Facebook!
Submit your photos to RNS