VATICAN CITY (RNS) — Pope Francis decried “the sin of racism” Wednesday (June 3) as he addressed the unrest and protests in the United States following the death of George Floyd.

“Dear brothers and sisters in the United States, I have witnessed with great concern the disturbing social unrest in your nation in these past days, following the tragic death of Mr. George Floyd,” Francis said to the faithful during his weekly audience in St. Peter’s Square.

RELATED: RELATED: Amid mounting protests in the US, Pope Francis calls for unity in diversity

“My friends, we cannot tolerate or turn a blind eye to racism and exclusion in any form and yet claim to defend the sacredness of every human life,” he said, adding that at the same time it’s important to recognize violence as a “self-destructive and self-defeating” act.

“Nothing is gained by violence and so much is lost,” the pope said on the first occasion where he addressed the riots and violence taking place in the United States.

Riots and protests took over the United States after the death of Floyd on May 25 in Minneapolis. A viral video recorded his final moments, in which a white police officer, Derek Chauvin, is seen pressing his knee into the neck of an unarmed Floyd, a black man. 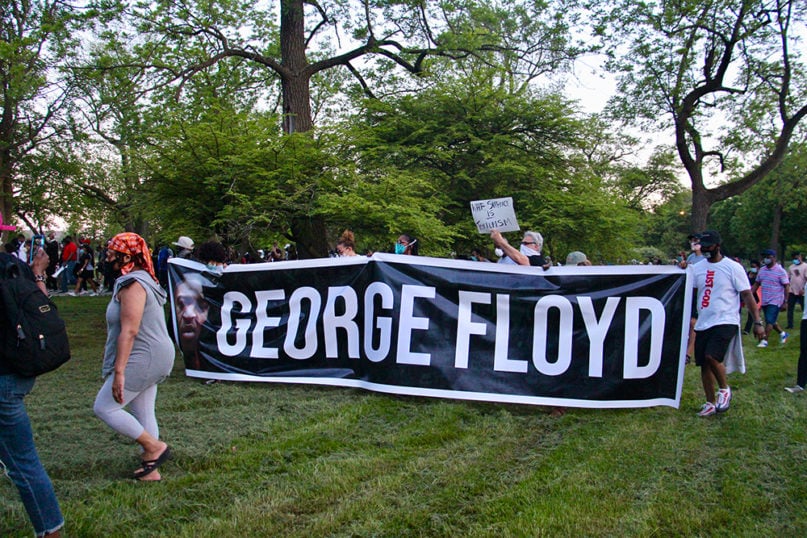 Participants in a Chicago faith community demonstration carry a large George Floyd banner through the Bronzeville neighborhood on Chicago’s South Side on June 2, 2020. RNS photo by Emily McFarlan Miller

“Today I join the church in St. Paul and Minneapolis, and in the entire United States, in praying for the repose of the soul of George Floyd and of all those others who have lost their lives as a result of the sin of racism,” Francis said.

“Let us pray for the consolation of their grieving families and friends and let us implore the national reconciliation and peace for which we yearn,” he added, and entrusted all those who work for peace and justice to the Lady of Guadalupe, the unifying Marian devotion across the American continent.

Archbishop Wilton Gregory, who was appointed to the Washington, D.C., archdiocese by Pope Francis in April 2019, criticized the visit Tuesday by President Donald Trump to the national shrine dedicated to St. John Paul II.

“I find it baffling and reprehensible that any Catholic facility would allow itself to be so egregiously misused and manipulated in a fashion that violates our religious principles, which call us to defend the rights of all people even those with whom we might disagree,” Gregory said in a statement released ahead of the president’s visit.

“Saint Pope John Paul II was an ardent defender of the rights and dignity of human beings. His legacy bears vivid witness to that truth,” Gregory said. Referring to Trump’s visit the day before to St. John’s Episcopal Church near the White House, the archbishop said that John Paul II “certainly would not condone the use of tear gas and other deterrents to silence, scatter or intimidate them for a photo opportunity in front of a place of worship and peace.”