(RNS) — The racial justice protests sweeping the country have brought into the open an inner conflict that I’ve been struggling with for several years: how to feel about Sikhs serving as police officers and military personnel.

Some Sikhs believe that serving in military or law enforcement is an important part of their identity as devout Sikhs, cohering with the teaching that every Sikh should live as a sant-sipahi (saint-soldier) or aligning with glorified histories of Sikhs fighting for justice.

Other Sikhs see the imperialistic nature of U.S. foreign policy and the racist histories of law enforcement as antithetical to what the faith teaches about ethics and justice. They might have trouble squaring cultures of unequal and inhumane treatment with a worldview that advocates for equality and justice for all.

Still others see these institutions as imperfect but valuable vehicles for social and professional growth – careers that are accessible, stable and service-oriented.

RELATED: Sikh deputy Sandeep Dhaliwal: a life of service on the front lines of change

It’s worth noting that Sikhs haven’t always been allowed or encouraged to choose law enforcement and military careers. Government institutions like our military and law enforcement agencies sometimes discriminate against Sikhs because of their beards or their turbans, which in turn sends the message to private employers that they can do the same without consequence. This is changing — the U.S. Military Academy at West Point will graduate its first observant Sikh this weekend — but it’s wrong. All people should have the right to serve or receive employment, no matter what religious tradition they follow.

But here’s the conundrum: On the one hand, one could make the argument that opening up these doors is an important step toward achieving equal treatment under the law. On the other hand, one could reasonably counter that the very nature of these institutions would preclude us from ever realizing justice and that working within these systems only exacerbates social inequities.

Reconciling these two points of tension has always been exceedingly difficult. How can I — as a person of color and a person of faith — ignore the disproportionate and unmerited violence inflicted upon already vulnerable communities? How can I change them if I refuse to engage with them?

The tension feels particularly pointed in our current moment: the countless murders of unarmed black men. Drone strikes killing civilians in Muslim-majority countries. The over-policing and surveillance in communities of color. Our military and law enforcement inflict immense harm on so many innocent people. The murders of George Floyd and Breonna Taylor are just the tip of the racist iceberg. There may well be a role for police within an ideally functioning government, but we are far removed from that ideal right now.

Sikhi teaches me that we must stand up for the basic human rights of others, even when we do not benefit personally and even when we do not agree with how those rights are exercised. In 1675, Guru Tegh Bahadur, the ninth guru of Sikhi, gave his life fighting for the rights of Kashmiri Hindus — with whom he deeply disagreed about religious doctrine and social practice — to practice their own religion freely. 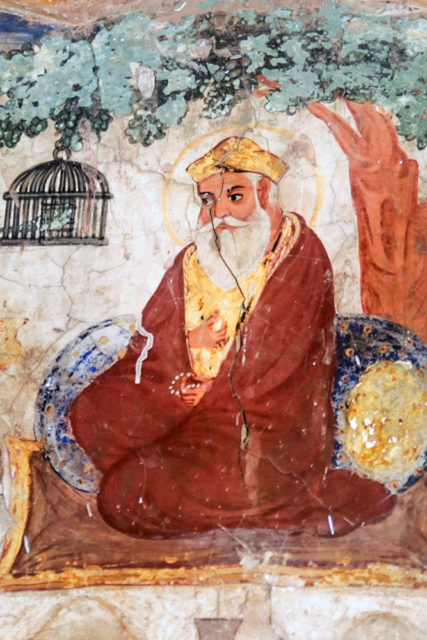 His beautiful example is a reminder of our responsibility to ensure basic human rights, including the freedom of religion.

More than a century earlier, Guru Nanak, Sikhi’s founding guru, persistently sought to challenge, overturn and reimagine discriminatory structures such as India’s caste system. Were he alive today, he might well have argued that we must fight hard to substantively reimagine our police and military forces, institutions that have shown time and again how much harm and trauma they inflict on us all — especially on communities of color, and most especially on our black siblings. They require systemic reform, if not outright abolition.

Guru Nanak modeled what it looks like to stand firmly against dehumanizing institutions and to replace them with alternative, more equitable structures.

What we see from the Sikh gurus is the ability to hold these two approaches together: We can seek people’s right to practice their faith freely, while also standing up against morally bankrupt institutions.

My sense is that the two approaches are not mutually exclusive. We can work from outside these institutions to push for meaningful change, partner with them to lead unconscious bias and cultural awareness trainings, challenge and hold them accountable when they fail to file hate crime charges when appropriate. I will protest them so long as they keep destroying the lives of innocent black Americans; I will work to create meaningful change with how we police in this country, whether through reform or abolition; and all the while, I will work to ensure they do not discriminate against religious minorities in their employment.

This week, I had the opportunity to address Mayor Bill De Blasio directly on these topics. I could have confronted him with a list of grievances, or I could have ingratiated myself with a powerful political leader; I chose to do neither.

Instead, I appealed to his inner humanity, describing the police brutality I witnessed during the protests last week as a microcosm for how police officers have zero accountability and infinite power. I implored him to see it as a justice issue and told him that cutting a billion dollars from his police department’s budget was just a start.

I also asked him to implement a few immediate changes, such as establishing a uniform force of standards, issuing guidance on the standards within 90 days and restricting the NYPD from giving officers who have used force “cooling off” periods before they have to answer for their actions. I also encouraged him to institute a database on officer misconduct, as well as a duty to intervene policy, where officers who witness a colleague engaged in brutality or excessive force are contractually obligated to intervene.

Each of us will not have the same approach, or role, or skill set, or theory of change — and it’s important for us to recognize that this is okay. I will not judge a fellow Sikh if they join the military or police force as long as they recognize they too must be an agent for change. Movement building requires deep engagement from a diversity of angles. That the injustices and inequities we have to overcome in this country are so deeply embedded demands that we take multi-faceted approaches in addressing them.

In a moment when so much is at stake, it feels critical that we make space for diverse approaches that move us in the right direction. When we can do that together, then we really have a chance to make the substantive change in our policing that so many of us deem to be critical.