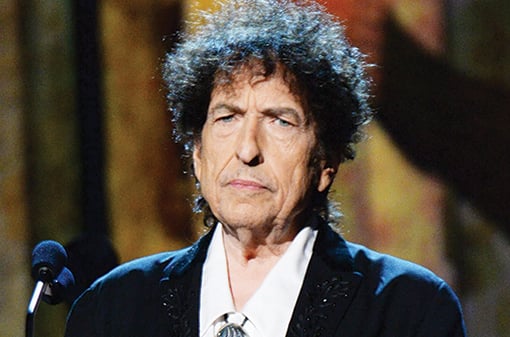 Share
Tweet
Share
Reddit
Flip
Email
(RNS) — It has only been four days since the release of Bob Dylan's first album of original songs in eight years — "Rough and Rowdy Ways."
In those few days, several of its songs — most notably, "I Contain Multitudes" and "Mother of Muses" — have become ear worms. They have taken up permanent residence within my brain.
That is how good Dylan's 39th studio album is. It appeared right after his 79th birthday.
I shall let certified Dylanologists analyze the lyrics on the new Dylan album with the appropriate depth.
I have only one question :What religion is Dylan, now?
Speaking of his life decades ago, Dylan said: "My past is so complicated you wouldn't believe it, man."
Not really. He was Robert Zimmerman, born in Duluth, Minnesota, and spent his childhood in Hibbing, Minnesota.
Bobby Zimmerman became bar mitzvah in Hibbing's small shul. His father, Abe, was the president of the local B'nai B'rith lodge. His mother, Beatty, was the president of the local Hadassah chapter. He attended Camp Herzl. At the University of Minnesota, he was a member of Sigma Alpha Mu, a nominally Jewish fraternity.
At certain points in his life, he all but denied being Jewish — pretending to be Woody Guthrie; saying that he had been an itinerant blues singer.
But, dos pintele yid, that Jewish spark, just kept on coming back, even if he claimed "Talkin' Havah Nagilah Blues," was a "foreign song I learned in Utah." He recorded numerous songs with Jewish references and biblical motifs — all of which have been analyzed beyond imagination.
Dylan embraced evangelical Christianity, recording several albums of songs with Christian-influenced lyrics.
He returned to Judaism. Check out this video of Dylan, his son-in-law, musician and observant Jew, Peter Himmelman, and the late Harry Dean Stanton at a Chabad telethon!  He visited Israel on several occasions. He recorded "Neighborhood Bully," rock music's most Zionist song.
So, yes: for someone whose religious identity has been "like a rolling stone," it is fair to listen to the new album, and ask: What religion is Dylan, now?
Is Dylan, once again, a Christian?
Consider the macabre song "My Own Version of You," with references to the apostles John and Peter, both founders of Christianity, and Saint Jerome, who translated the Bible into Latin.

I'm gon' make you play the piano like Leon Russell
Like Liberace, like St. John the Apostle
I'll play every number that I can play
I'll see you maybe on Judgment Day
After midnight, if you still wanna meet
I'll be in Black Horse Tavern on Armageddon Street
Two doors down, not that far a walk
I'll hear your footsteps, you won't have to knock
I'll bring someone to life, balance the scales
I'm not gonna get involved in any insignificant details...
You can bring it to St. Peter
You can bring it to Jerome
You can bring it all the way over
Bring it all the way home.

True: Leon Russell played a mean piano. So did Liberace.
But, Saint John the Apostle? Unless Dylan needed a rhyme for Russell? Judgement Day — clearly Christian.
Or, "I've Made Up My Mind To Give Myself To You.”

If I had the wings of a snow white dove
I'd preach the gospel, the gospel of love
A love so real, a love so true
I've made up my mind to give myself to you.

And finally, "Goodbye Jimmy Reed," which refers to the influential American blues musician and songwriter.

I live on a street named after a saint
Women in the churches wear powder and paint
Where the Jews, and Catholics, and the Muslims all pray
I can tell they're Proddie from a mile away
Goodbye Jimmy Reed, Jimmy Reed indeed
Give me that old time religion, it's just what I need.
For thine is kingdom, the power and the glory
Go tell it on the mountain, go tell the real story
Tell it in that straightforward, puritanical tone
In the mystic hours when a person's alone
Goodbye Jimmy Reed, godspeed
Thump on the Bible, proclaim a creed.

Is Dylan back to Christianity? Or, is he just using Christian images, as he had done so often even before his born again phase? Recall "I Dreamed I Saw Saint Augustine": ...With a blanket underneath his arm and a coat of solid gold. Searching for the very souls whom already have been sold."
That street "where the Jews, and Catholics, and the Muslims all pray" — is that a vision of a multi-faith America, or some point in the Old City in Jerusalem where such a prayer life would be possible?
Or, is Dylan flirting with ancient Greek religion?  Consider the hymn-like "Mother Of Muses:"

Is "Mother of Muses" just an easier way of referring to Mary? Is she (oh, I am so going out on a limb here!) the Shechinah, the feminine presence of God?
I don't know, and as I said, let's leave the religious question to the "professionals."
Especially because when Dylan channels Walt Whitman in "I Contain Multitudes," when he sings of all the identities that comprise him, who is among the ones that he cites? Along with Edgar Allan Poe, the Rolling Stones, Indiana Jones: "I'm just like Anne Frank..."
Dylan sees himself as a Jewish teenage girl, hiding in an attic with her family from the Nazis.
When all is said and done (and all is probably not said and done), at the very root of his existence: Dylan is Bobby Zimmerman, and there is no piece of him that can forget it.
"I'm a man of contradictions, I'm a man of many moods. I contain multitudes..."
There is no single popular artist — no, there is no single American cultural hero — who contains as many multitudes as does Bob Dylan.
Listen to the album. It will move you, profoundly — and, as is always the case with Dylan, it will make you think.