CHICAGO (RNS) — The iconic Soldier Field, home to the Chicago Bears, was unusually packed for a summer night.

But the crowd wasn’t there to see a football game.

They were there to see a miracle — or, at least, a film about one.

More than 70 cars lined up Tuesday night (July 28) for a screening of “Fatima” — a new movie about the Virgin Mary’s reported 1917 appearances to three shepherd children in Fatima, Portugal — complete with photographers to capture cars arriving on the blue carpet and some screening-day swag — “Fatima” face masks.

“This is a different sort of a tailgate tonight, without the brats and the hamburgers and the hot dogs and so forth. You might call this a prayer tailgate,” Bishop Joseph N. Perry of the Archdiocese of Chicago said before the film.

RELATED: Churches go back to the future with drive-in services in the time of the coronavirus Bishop Joseph N. Perry speaks at a screening of “Fatima” at Soldier Field in Chicago on July 28, 2020. RNS photo by Emily McFarlan Miller

“Fatima” tells the story of the apparitions through the eyes of a skeptical professor, as he interviews the adult Lucia Abobora, the oldest of the children. The film is one of many releases impacted this summer by the coronavirus pandemic, as U.S. theaters have been closed in an attempt to slow its spread.

“Just like the churches, we had to pivot, too,” said Jeanne Berney, chief operating officer of Picturehouse Entertainment, the film’s distributor.

“Trolls: World Tour” broke streaming records in April when it was released not in theaters as planned, but direct-to-digital, according to Esquire. Other highly anticipated summer blockbusters have been postponed, including Disney’s live-action “Mulan,” “Wonder Woman 1984” and sci-fi thriller “Tenet.”

“Fatima” was originally scheduled for release in April, then mid-August, according to Berney.

Now it’s set to appear both in theaters and online on Aug. 28.

On Tuesday, Regal Cinemas announced it will reopen U.S. theaters on Aug. 21, and AMC, in mid- to late August, though some states’ phased reopening plans have not yet given theaters the green light.

“Sometimes I think Our Lady is in charge of this release, and that gives me hope,” Berney said.

Usually, releases are accompanied by advance screenings at theaters for press and other “influencers” — in the case of a faith-based film like “Fatima,” often clergy — to build buzz, she explained.

The pandemic didn’t just throw a wrench into Picturehouse’s plans to promote the film. It put a padlock on them, Berney joked.

That’s when the distributor arrived at solutions similar to those that many churches have had to implement during the pandemic: a virtual pilgrimage to Fatima and drive-in screenings.

Picturehouse is screening “Fatima” this month at drive-in events in 10 cities across the country.

Several are in church parking lots. 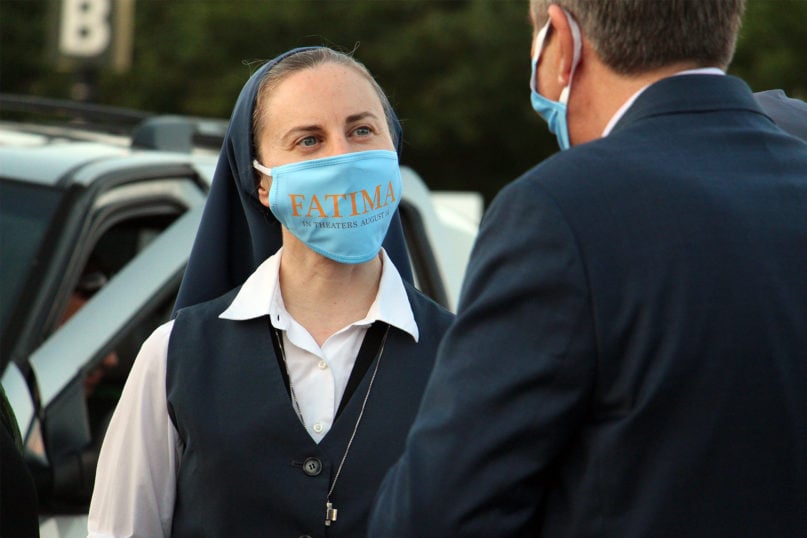 Sister Tracey Dugas, of the Daughters of St. Paul, at a screening of “Fatima” at Soldier Field in Chicago on July 28, 2020. RNS photo by Emily McFarlan Miller

Others are at football stadiums that have opened as drive-in theaters for people looking to get out of their houses for safe, socially distant entertainment. They include Hard Rock Stadium in Miami and a parking lot at Soldier Field, for now home not to the Chicago Bears, but to CHI-Together’s drive-in music and movies.

Tuesday’s event at Soldier Field was hosted by the Daughters of St. Paul, better known as the #MediaNuns, who accepted donations to help with repairs to their bookstore near the Magnificent Mile.

The sisters’ bookstore, Pauline Books & Media, was damaged and money stolen from its cash registers in late May when some people at a large protest downtown became destructive, breaking out its glass doors and shattering its large front windows, she said.

Our Lady of Fatima’s message of peace through prayer, penance, conversion and belief in the love of Jesus resonated with Sister Tracey Dugas.

RELATED: The ’Splainer: Who is Our Lady of Fatima and what is the ‘Third Secret’?

The tense moment in the United States is not unlike the time in which the film is set, when so much of the world was torn apart by World War I, Dugas said.

In fact, not long after the reported apparitions, two of the children, Jacinta and Francisco Marto, died in the flu pandemic that swept the globe from 1918-1920. They since have been declared saints by the Roman Catholic Church, which has also started the process of sainthood for Abobora, later Sister Lucia de Jesus dos Santo.

The church considers the apparitions at Fatima “worthy of belief.”

“This message rings so true for us today. Between the pandemic and quarantine, job loss and people’s livelihoods being destroyed, chaos and civil unrest, we need this message now more than ever,” Dugas said.