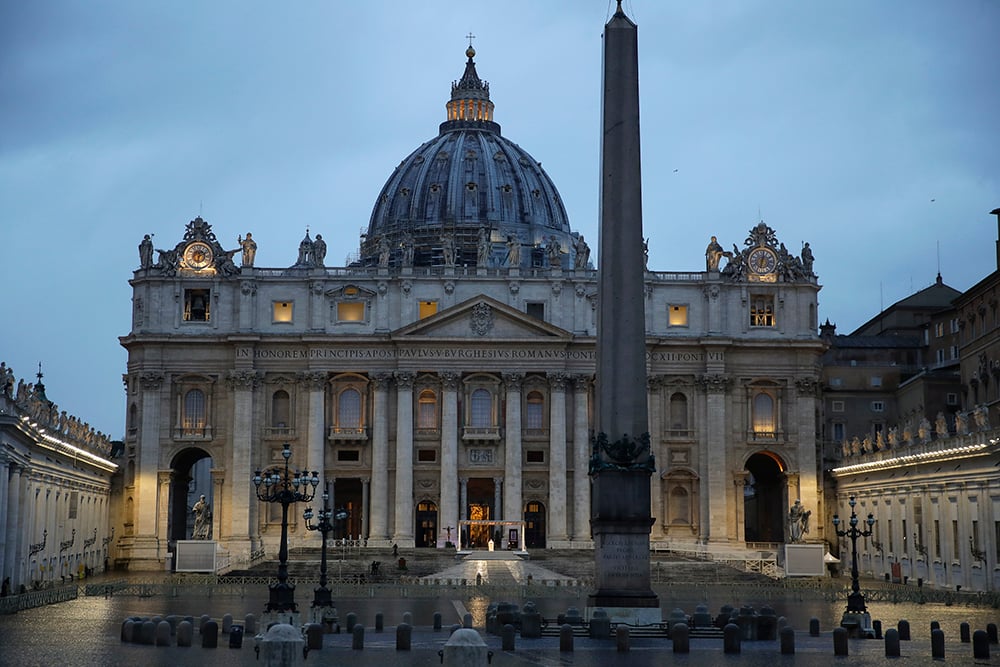 Pope Francis, white figure standing alone at center, delivers an Urbi et Orbi blessing from the empty St. Peter’s Square, at the Vatican, on March 27, 2020. Francis has likened the coronavirus pandemic to a storm laying bare illusions that people can be self-sufficient and instead finds “all of us fragile and disoriented” and needing each other’s help and comfort. (AP Photo/Alessandra Tarantino)
August 20, 2020
Thomas Reese

(RNS) — Since COVID-19 first began to spread, Pope Francis has been challenging Catholics and the world about the response to the pandemic. As a pastor, he’s also offered us hope.

Now, a collection of his messages on the pandemic put together by Cardinal Michael Czerny, a Canadian Jesuit who works closely with the pope in Rome, has been published as “Life After the Pandemic.” It contains eight papal addresses given in March and April that show how the pope thinks about living in this time.

Two of the pieces, “Urbi et orbi” addresses to the city of Rome and the world, may be familiar to some. Others are talks he gave to individuals and groups, even a message to those involved in street newspapers sold by the homeless and poor.

As he often does, Francis in these speeches calls to account the world’s powerful, politically or economically. He is also concerned with the “small part of the human family (that) has moved ahead, while the majority has remained behind.”

The pope fears the world will respond to the pandemic with “the selfishness of particular interests.” We may “be struck by an even worse virus, that of selfish indifference. A virus spread by the thought that life is better if it is better for me, and that everything will be fine if it is fine for me.” This will lead to “discarding the poor, and sacrificing those left behind on the altar of progress.” 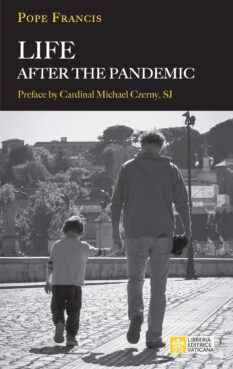 “Life After the Pandemic.” Image courtesy of Libreria Editrice Vaticana

Rather, he hopes that we will “be profoundly shaken by what is happening all around us.” If we recognize that we are one family, then our response must be “to eliminate inequities, to heal the injustice that is undermining the health of the entire human family!”

The pandemic, and our response, is as much a symptom as an illness in itself. The pope asks us to “take a frank look at the facts to see that our common home is falling into serious disrepair. We have polluted it, we have despoiled it, endangering our very lives. … We have no future if we destroy the very environment that sustains us.”

“Greedy for profit, we let ourselves get caught up in things, and lured away by haste,” he laments. “(W)e were not shaken awake by wars or injustice across the world, nor did we listen to the cry of the poor or of our ailing planet.”

Francis notes the other epidemics we face: hunger, “wars fueled by desires for domination and power” and “lifestyles that cause so many to suffer poverty.”

Returning to business as usual is not an option. In the preface, Czerny asks: “Why reinvest in fossil fuels, monoculture farming and rainforest destruction when we know they worsen our environmental crisis? Why resume the arms industry with its terrible waste of resources and useless destruction?”

Francis calls on government to put people first, even as he realizes this entails economic hardship. To opt for the contrary “would lead to the death of many people, in one sense a kind of viral genocide,” he says.

The pope encourages “political leaders to work actively for the common good, to provide the means and resources needed to enable everyone to lead a dignified life and, when circumstances allow, to assist them in resuming their normal daily activities.”

At the same time, the pope hopes “that governments understand that technocratic paradigms (whether state-centered or market-driven) are not enough to address this crisis or the other great problems affecting humankind. Now more than ever, persons, communities and peoples must be put at the center, united to heal, to care and to share.”

The example of caregivers and frontline workers gives the pope optimism that we can think this way. He thanks “all who work diligently to guarantee the essential services necessary for civil society … (who) have helped ease people’s difficulties and suffering.” He singles out the ordinary but often forgotten people: “doctors, nurses, supermarket employees, cleaners, caregivers, providers of transportation, law and order forces, volunteers, priests, religious men and women” as well as “fathers, mothers, grandparents and teachers.”

He mourns those we’ve lost, praying that God might “welcome the departed into his kingdom and grant comfort and hope to those still suffering, especially the elderly and those who are alone.” He singles out those in nursing homes and prisons. He sympathizes with those who are homeless or “live in tiny, ramshackle dwellings.”

Francis acknowledges the fear we still face. “Thick darkness has gathered over our squares, our streets and our cities; it has taken over our lives, filling everything with a deafening silence and a distressing void, that stops everything as it passes by.” He confesses, “We find ourselves afraid and lost.”

The pandemic “exposes our vulnerability and uncovers those false and superfluous certainties around which we have constructed our daily schedules, our projects, our habits and priorities.”

He calls for a relaxation of international sanctions and a reduction if not forgiveness of debts so that poor countries can care for their citizens. He hopes that fighting might cease so that the world can attend to the needs of migrants and refugees.

More than that, Francis wants people to remember that the Lord is still with them. “In the midst of isolation when we are suffering from a lack of tenderness and chances to meet up, and we experience the loss of so many things, let us once again listen to the proclamation that saves us: He is risen and is living by our side.”

“Embracing the Lord in order to embrace hope,” he says, “that is the strength of faith, which frees us from fear and gives us hope.”

A quote on the back cover of the book summarizes Francis’ thoughts and prayer:
If we act as one people,
even in the face of other epidemics
that threaten us,
we can make a real impact.…
May we find within us the necessary antibodies of
justice, charity and solidarity.
We must not be afraid
to live the alternative—the civilization of love….
In this time of tribulation and mourning,
I hope that, where you are,
you will be able to experience Jesus,
who comes to meet you,
greets you and says: “Rejoice” (cf. Mt 28:9).
And may this greeting mobilize us
to invoke and amplify the Good News
of the Kingdom of God.