According to its website, which is part of the Trump campaign’s larger site, the effort is “paid for by Donald J. Trump for President, Inc.,” and is co-chaired by former U.S. Senator Orrin Hatch and Cindy Biggs, who is the wife of Rep. Andy Biggs, a Republican from Mesa, Arizona.

While Mormons only represent about 6% of the population of Arizona, that may be enough to make a difference in the election. Trump won the state by just 3.5 percentage points in 2016, or just over 91,000 votes. But this year, Trump is trailing Biden by several points in the state, with many predicting a close election there.

Because it’s expecting a tough fight, the Trump campaign is openly courting the Latter-day Saint vote, but the move has engendered criticism within the Church of Jesus Christ of Latter-day Saints. It didn’t help that the pro-Trump group’s early advertisement depicted its board of directors positioned against a backdrop of the Salt Lake Temple, implying official church approval for its partisan politicking. “Latter-day Saints for Trump” has since removed the temple imagery and substituted an image of Mike Pence addressing the group during his visit to Arizona on August 11. It’s not just the temple appropriation that’s a problem, however; there are at least two other issues.

One is the group’s name. Since church president Russell M. Nelson began a crusade two years ago to get people to stop using the word “Mormon” to refer to the church or its members, it has created an unexpected dilemma.

It used to be acceptable to utilize the church’s name only when referring to the church’s own institutional presence, and using “Mormon” for all things unofficial, ad hoc, and church-adjacent. Now, with Pres. Nelson pivoting toward the use of “Latter-day Saints” for everything, it puts members between a rock and a hard place. According to the church’s handbook, they are forbidden from using the name of the church in reference to anything not sponsored by the church. Fair enough. But in the absence of “Mormon” as an acceptable term for describing unofficial groups that church members may want to be involved in, they have no other option but to break the rule. So “Latter-day Saints for Trump” – or even “Latter-day Saints for Joe,” the lower-key grassroots effort that has done at least one event sponsored by the Democratic candidate – are utilizing part of the name of the church to baptize their chosen political candidates.*

Section 38.8.11 of the handbook gives careful guidelines about restricting the use of the Church’s name and logo, and 38.8.34 explains that “Church leaders and members should also avoid statements or conduct that might be interpreted as Church endorsement of any political party, platform, policy, or candidate.”

The second, and far more important, issue is with President Trump himself, and the dangers of associating the church with him. 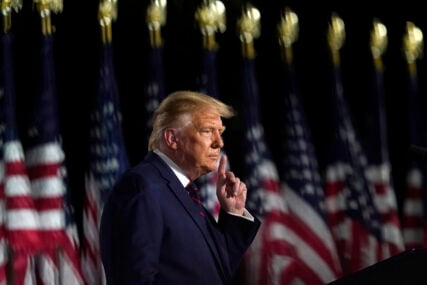 Readers of this column know that I think President Trump is a threat to our nation’s democratic ideals. He praises dictators while denigrating the watchdog role of a free press. He has consistently shown a depraved indifference to human life, whether it’s the lives of Black people who are seeking equal rights or elderly people who are dying of Covid-19. (The alarming US death toll “is what it is,” he said earlier this month.) His insatiable need for ego strokes is unprecedented in American history and an embarrassment to our nation’s standing in the world. The only predictable aspect of his chaos-laden presidency is that he wants to be a private king, not a public servant. His narcissism is a trait you can bank on time and time again.

So it goes without saying that it’s incomprehensible to me that there can still be “Latter-day Saints for Trump” when we have had four years to observe how at odds this president’s behavior is with the church’s professed ideals about the sanctity of life and the importance of humility, to say nothing of sexual propriety. Former Senator Jeff Flake and current Senator Mitt Romney, both committed Republicans and members of the LDS Church, have made it clear they have serious reservations about the man. Flake, for his part, has stated publicly that he is not going to vote for Trump, saying that a vote for Biden is the only viable path forward for preserving conservatism (and anything else worth keeping) in America. And the Atlantic reported earlier this year that Romney has also decided not to vote for Trump, though he has not indicated how he will vote, and has been tight-lipped in subsequent interviews.

What Mormons do in this election matters – not only politically, in swing states such as Arizona, but in terms of the church’s own reputation and even its missionary efforts. In America today, we are seeing the worst political polarization in recorded history. In early 2020, an 82-point gap separated Republicans’ approval of the job Trump was doing (89 percent) with Democrats’ (7 percent). This chasm was the largest ever chronicled by Gallup, surpassing the previous record, also held by Donald Trump, of a seventy-nine-point gap. In this situation, there will be consequences to the political messages of the LDS Church and any affiliated member groups bearing the name “Latter-day Saints.” If church members vocally support such an unpopular and extremist president, they risk alienating more moderate individuals within the fold as well as potential converts—particularly the younger adults the church wants to add to its ranks, who support Biden over Trump by a two-to-one margin.

*Correction, 9/1: The original version of this article stated that “Latter-day Saints for Joe” was “the lower-key Democratic alternative that also appears to be paid for by the candidate,” but that is not entirely accurate. According to Rob Taber, the national co-chair of Latter-day Saint Democrats of America, the Biden campaign does not sponsor the “Latter-day Saints for Joe” group (which was  renamed “Latter-day Saints for Biden-Harris” during the Democratic National Convention “to recognize the historic nature of Senator Harris’s candidacy”). Taber notes that while the Biden-Harris campaign sponsored its August 15 online event and may sponsor other events in the future, the campaign does not host or direct its social media presence or maintain a webpage for the group on the Biden campaign site.

Can a forgotten Mormon leader teach us something about Donald Trump today?

Flunking Sainthood
At the Capitol, we saw the best and the worst of US Mormonism
Follow us on Facebook!
Submit your photos to RNS