(RNS) — President Donald Trump is having a difficult time galvanizing enthusiasm among Latter-day Saint voters, according to a new study from the Democracy Fund + UCLA Nationscape. The sample of more than 100,000 Americans included more than 1,300 who identified as Mormons, or members of The Church of Jesus Christ of Latter-day Saints.

Overall, 55% of U.S. Mormons surveyed said they approved of the way Trump is handling his job, with men (62%) being more supportive than women (51%). That gender break, in which men are more likely to approve of Trump than women, has been consistent in other studies of Mormon voters, including 2019 research from Pew, in which the gap was even wider.

Women are also more likely to disapprove of Trump than men. Only a third of Mormon men (33%) say they disapprove of the way Trump is handling the presidency, compared with 44% of women. In an article last week in Business Insider, Daniel Cox, research fellow for polling and public opinion at the American Enterprise Institute, quoted an interviewee in the study as she attempted to explain why, though she is a loyal Republican, she is turned off by Trump.

“When they think about Trump they don’t think about the boy in sixth grade who snapped your bra, and I do,” the Virginia Mormon told Cox.

Cox told Religion News Service that this woman hit upon something important with that comment. “The men in her life, even if they share her same (political) views, just don’t have that experience they can relate to. I think that goes beyond Mormon women to women across the country.”

Indeed, Mormon women are not alone in their lack of enthusiasm for the president. In multiple studies from Pew, Gallup,  Harris and Quinnipiac, women’s approval of Trump has lagged men’s, and women’s disapproval has been more entrenched. In this way, Mormons mirror the mood of the country, though they are noticeably more supportive of the president than other Americans, on average.

The findings about Mormons emulate another national trend as well: His support is weakest among younger voters. In the 18 to 29 age group, Mormons are evenly divided, with 48% approving and 48% disapproving of Trump. Compare that to the over-65 demographic, in which 74% of U.S. Mormons approve, and only 26% disapprove. 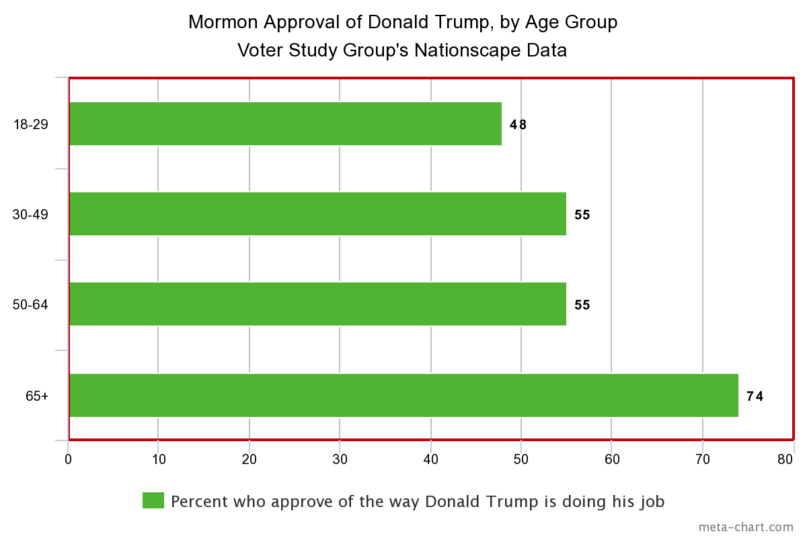 But Mormons’ lukewarm feelings toward the president have not significantly damaged their overall Republican Party affiliation. Roughly two-thirds of Mormons surveyed say they “identify as Republican or lean toward the Republican party.” This is lower than in past surveys, but not dramatically so.

Among men, party affiliation is consistent with their approval of Trump: 63% of Mormon men say they are Republican, and 62% approve of the job the president is doing. Among women, however, there’s a 17-point disconnect between the percentage that identifies as Republican (68%) and that approves of Trump (51%).

This means that Trump is underperforming among Republican Mormon women, who should be a reliable base for him, as they have been for past GOP presidents.

The underperformance is also noticeable with younger U.S. Mormon voters. Recall that in the 18 to 29 age group, only 48% approved of Trump’s presidency. But 59% of LDS respondents in that age group say they are Republican or lean that way, which means that while three-fifths align with the core values of the GOP, some of them object to Trump himself.

Since Mormons are a tiny percentage of the U.S. population (between 1.4% and 2%, depending on the study), it’s unlikely their approval or disapproval will make much of a difference in terms of the national popular vote. But Cox believes Trump’s stumbles among Mormon voters could hinder him on a state-by-state basis in the race for the Electoral College. In states like Nevada and Arizona, where Mormons are approximately 5% of the population, it’s possible Trump could have a problem connecting with Mormons at the ballot box. Those states are also home to two former U.S. senators — Harry Reid, D-Nevada, and Jeff Flake, R-Arizona — who have been outspoken in their sharp criticisms of the president.

In neighboring Utah, Mormon U.S. Sen. Mitt Romney made headlines in recent days for being one of two Republican senators to break ranks with the party in voting for more witnesses and new evidence to be allowed in Trump’s impeachment trial.

Cox predicts that Latter-day Saints’ distaste for Trump will depress their voter turnout in November’s general elections, but not reverse their GOP-friendly voting patterns. “I think the most likely outcome is that we see a drop-off in Mormon turnout and not an avalanche of support for the Democratic nominee, even if it’s a moderate like Biden,” he says.

He also thinks it’s possible Mormons could have an outsized influence on the future direction of the Republican Party.

“If the GOP wants to revisit and reestablish its identity as a values-voters coalition, Mormons would be well-positioned to lead that charge,” he says. “They’re committed Republicans who care a lot about right and wrong behavior. And a lot of them are not willing to give that up just for the sake of political expediency.”

Mormons, Trump, and McMullin: A 2016 postmortem by the numbers