(RNS) — On Aug. 26, hundreds of students, wearing masks and properly distanced, gathered in Liberty University’s Williams Stadium for Campus Community, a weekly event that campus pastor David Nasser calls “one of the largest Bible studies in the world.”

It was the first Campus Community of the new academic year and Nasser did not avoid the elephant in the room (or, in this case, on the field). He directly addressed the resignation of former Liberty President Jerry Falwell Jr. after allegations that Falwell and his wife, Becki, had initiated a multiyear sexual affair with a Miami pool boy named Giancarlo Granda.

“This moment that we’re in is a mess,” Nasser said, and “I am sorry.” He added, “Liberty is more than a college. … We are God’s college and as our founder (Jerry Falwell Sr.) always said, ‘If it’s Christian it ought to be better,’ certainly better than this.”

These were powerful, heartfelt words. It’s obvious that Nasser is a good man who wants to bring healing to the university he loves. Such healing starts with acknowledging Falwell Jr.’s sin and affirming a commitment to make Liberty, in Nasser’s words, a more “God-glorifying place.”

RELATED: What Jerry and Becki Falwell can learn from Jim and Tammy Bakker

But for many onlookers, the problems at Liberty run much deeper than a sex scandal. If the university is serious about cleaning up the mess, it will need to take a hard look at the approach to Christianity and public life that the university’s leadership has championed for more than four decades. With Falwell Jr. gone, Liberty does indeed have a chance to be a “better,” more “God-glorifying place,” but it will require serious reforms. The first step should be to close its culture war “think tank,” the Falkirk Center. Founded in November 2019, the Falkirk Center is the brainchild of Jerry Falwell Jr. and pro-Donald Trump activist Charlie Kirk. (Its name is a portmanteau of the two men’s names.) The center operates with a “moral mission” to “go on the offensive in the name of Christian principles and in the name of exceptional God-given American liberties,” according to its website. Those commissioned to speak on behalf of the center — these men and women bear the title “Falkirk fellows”— are described as “bold ambassadors equipped with Biblical and Constitutional knowledge to speak truth to believers and unbelievers alike in every professional field and public forum.”

If you want to understand what the Falkirk Center means by “going on the offensive” or speaking “truth” in every “public forum,” you need to look no further than Falwell’s well-documented public statements over the last four years. He has tweeted an image of a blackface coronavirus mask as part of his criticism of Virginia Gov. Ralph Northam. Falwell claimed that COVID-19 is the result of a secret collaboration between North Korean dictator Kim Jung Un and China for the purpose of undermining the Trump presidency.

Falwell praised Trump’s comments in defense of white supremacists during the August 2017 racial unrest in Charlottesville, Virginia, and defended Trump’s boasting of sexual assault on a tape released by the entertainment show Access Hollywood. Falwell threatened a New York Times reporter in a late-night voicemail. He defended U.S. Senate candidate Roy Moore of Alabama after Moore was accused of molesting teenage girls.

During the Democratic National Convention, meanwhile, Kirk published tweets saying that Michelle and Barack Obama “hate America,” Bernie Sanders is a “communist,” and the Democrat Party is the party of “white liberal racists.” Two weeks ago, Kirk tweeted to his 1.8 million Twitter followers that NBA players protesting the Kenosha, Wisconsin, shooting of Jacob Blake are “morons” and the league is “a national joke and disgrace.” 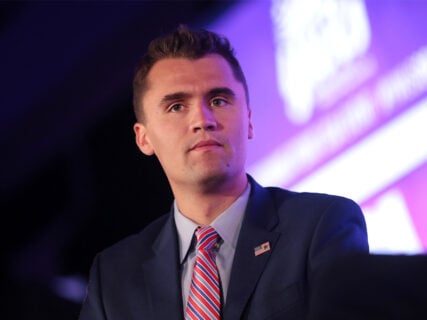 Falkirk Center fellow Eric Metaxas, an author and radio host who has compared Hillary Clinton to Hitler, has suggested that those who oppose Trump are “demonic.” In 2016, Metaxas wrote a Wall Street Journal op-ed claiming that if evangelicals did not vote for Trump “God will not hold us guiltless.” More recently, Metaxas said that Jesus was white,  and on the final night of the Republican National Convention, in Washington, D.C., Metaxas was caught on camera throwing a punch at an anti-Trump protester.

Sebastian Gorka, a radio host and former Trump foreign policy strategist with dubious academic credentials, also serves as a Falkirk fellow. In the last few weeks, Gorka claimed that Joe Biden was senile, downplayed the threat of COVID-19 and retweeted a conservative pundit who described the victims of Kenosha shooter Kyle Rittenhouse as “scumbags.”

Gorka’s colleague at the Falkirk Center, Jenna Ellis, is a lawyer and pundit who defended John MacArthur, the Los Angeles megachurch pastor who defied California’s COVID-19 restrictions on indoor religious worship. (MacArthur recently told his congregation, in a complete misreading of data from the U.S. Centers for Disease Control, that the COVID-19 pandemic does not exist.)

When Biden floated the idea of a mandate requiring all Americans to wear masks, Ellis tweeted, “NO. FREAKING. WAY. And this should give you just a little preview of how Democrats want to take away your liberty and dictate your decision.”

Of course, science tells us that wearing masks can save lives.

Does Liberty University condone the practice of Christians using their platforms to demonize political enemies, promote lies and engage in the worst kind of political fearmongering? If we take the history of Liberty University seriously, the answer to all these questions is “yes.”

RELATED: John MacArthur claimed there is ‘no pandemic.’ He was politicizing science, experts say 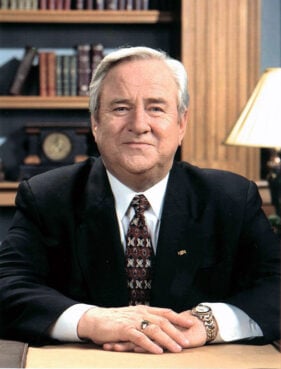 The Falkirk Center’s participation in the gutter politics of hate is nothing new. Jerry Falwell Sr. may have believed that “if it is Christian it ought to be better,” but his “Christian” approach to politics was just as scandalous and nasty as the rhetoric emanating from the Falkirk Center over the past year.

For example, in 1985, as Blacks in South Africa fought the evils of apartheid, Falwell Sr. stated that the Very Rev. Desmond Tutu, the Anglican bishop working to bring racial reconciliation to the country, was a “phony.” In a debate with the Rev. Jesse Jackson on the ABC news show “Nightline,” Falwell Sr. announced that the “overriding issue” in South Africa was not racial segregation, but the threat of a communist takeover.

Falwell Sr. also distributed and promoted “The Clinton Chronicles,” a documentary that advanced a conspiracy theory that Bill Clinton was, among other things, a murderer. Liberty’s founder blamed the Sept. 11, 2001, attacks on abortionists, pagans, feminists and “the gays and lesbians.”

Future historians examining the history of Liberty University might notice the differences in the leadership style between Jerry Falwell Sr. and Jerry Falwell Jr., but they will not miss the similarities in their political language.

The members of Liberty’s board of trustees have dealt with Falwell Jr.’s sexual immorality, but real reform will only come when they address the systemic sins that have plagued the university from its founding. The Falkirk Center is merely the latest manifestation of the “missional values” that are deeply embedded in the culture of Liberty.

If the Christian university wants to really clean up the “mess” and be a “better” and more “God-glorifying” institution in the post-Falwell era, the Falkirk Center will be a good place to start.

(John Fea is distinguished professor of history at Messiah University and the author of “Believe Me: The Evangelical Road to Donald Trump.” The views expressed in this commentary do not necessarily reflect those of Religion News Service.)