(RNS) — Computers are unforgiving, but Christianity is supposed to be forgiving. Computers insist that humans, especially programmers, be exact. A single wrong letter in a line of code can crash a program. But even ordinary users can experience this. Nothing puts us into panic like a computer telling us: “Invalid Username or Password.”

The religion of Jesus is supposed to be forgiving. He attacked the Scribes and the Pharisees for their emphasis on the minutiae of the law. Yet, even under Pope Francis, who is all about compassion and forgiveness, the literalists appear to be alive and well in the Vatican Congregation for the Doctrine of the Faith.

For centuries, the baptismal formula in the Roman Catholic Church has been: “I baptize you in the name of the Father, and of the Son, and of the Holy Spirit.” Most Protestant churches have also used this formula.

Toward the end of the 20th century, however, a few baptismal ministers began tinkering with the formula. A few ministers have said “We baptize” to bring out the familial or community dimension of the baptism.

In June the congregation, which deals with doctrinal issues, ruled that a baptism was invalid if the minister said, “We baptize” instead of “I baptize.…”

This caused absolute chaos in Detroit, where the Rev. Matthew Hood saw in a video of his 1990 baptism that Deacon Mark Springer used the “We” formula. As a result, Hood was not a Christian, let alone a priest, because he could not be validly ordained a priest if he was not validly baptized.

Hood’s situation was quickly remedied on Aug. 9 with his baptism and on Aug. 17 with his ordination. But the archdiocese is trying to track down everyone baptized by Deacon Springer, who served in Detroit from 1986 to 1999. How many other priests and deacons around the country used “We” is unknown.

But since his ordination in 2017 was invalid, people who went to Hood’s “Masses” did not really attend Mass and did not receive consecrated bread at Communion. It also means that his absolutions in confession were not sacramental. His confirmations and anointing of the sick were also invalid. When he performed these sacraments, he was not even a Christian, let alone a priest.

Thankfully, his baptisms were valid because a non-Christian can perform a valid baptism.

This isn’t the first time the formula, which the congregation holds was mandated by Jesus in Matthew’s Gospel, has been tested. Some priests have tried gender-neutral nouns: “I baptize you in the name of the Creator, the Redeemer and the Sanctifier.” Others used “Creator, Liberator and Sustainer.”

Both formulas were declared not only illicit but invalid by the congregation in 2008. In other words, it was not only against the rules, it did not work. The person is not baptized and must be baptized again using the correct formula.

An argument can be made that Hood’s marriages could be valid because the couple are the ministers of the sacrament, not the priest. The priest is simply a witness for the church and the church has allowed the nonordained (for example, sea captains) to perform this task in emergencies.

But what about people who were invalidly baptized and then were married in the church?

They are probably safe if they married a baptized Christian, because only one of the persons needs to be a Christian for the marriage to be valid. But if either party was not baptized, there would be no sacrament. It takes two Christians to have a sacramental marriage.

In a worst-case scenario, there might even be a bishop who was invalidly baptized. Not only are his Masses, confessions and confirmations invalid, so too are his ordinations. That means the men he ordained are not priests and all of the sacraments they performed are invalid.

The real problem here is that the Vatican is treating the traditional words of baptism like a computer password. Without it, you cannot get into the church.

In fact, some scholars point to the Pauline letters for evidence that early Christians were baptized in the name of Jesus, not the Trinity. The Catholic Encyclopedia, for example, states that “The baptismal formula was changed from the name of Jesus Christ to the words Father, Son, and Holy Spirit by the Catholic Church in the second century.”

If the congregation is correct, then the early Christians are all in Limbo. Woops, I forgot, Pope Benedict got rid of Limbo. 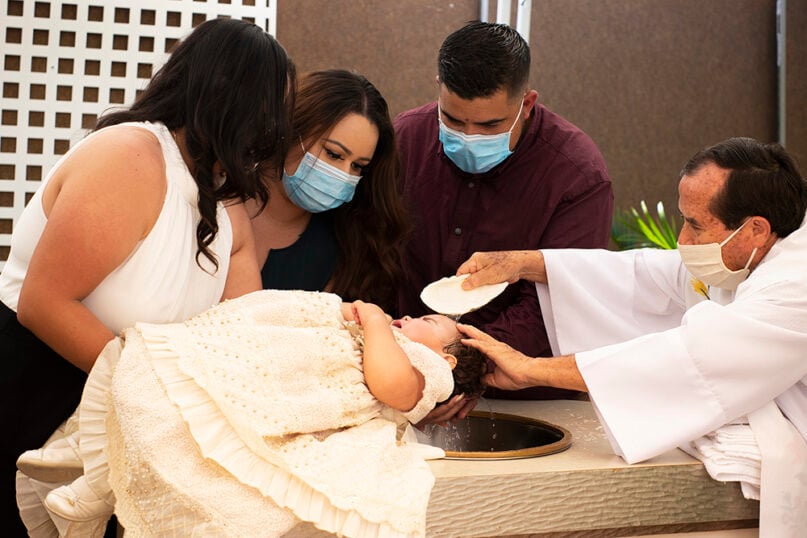 An outdoor baptism at Our Lady Queen of Angels Church, known as “La Placita,” in Los Angeles, in August 2020. Photo by Víctor Aleman/Archdiocese of Los Angeles

Such Orthodox baptisms have been recognized as valid by the Roman Catholic Church since the Council of Florence in 1439.

“To declare that the baptism is illicit when the minister uses the term ‘We’ rather than ‘I’ is appropriate,” said the Rev. Peter Fink, retired professor of sacramental theology from the Weston School of Theology and editor of “The New Dictionary of Sacramental Worship.”

“To declare that the baptism is invalid is a far more serious charge,” he argued, “and seems to go against the long-standing Catholic tradition in favor of baptizing when a baptism is requested, even to the extent that a nonbaptized person may baptize in emergency situations if need be.”

People “expect the baptism to be valid, and any suggestion that the baptism is not simply makes fun of the sacrament itself,” said Fink. “The couple who sought from the church a baptism for their child should leave with the conviction that the baptism has in fact taken place, and nothing should make them think otherwise.”

If you do not know how you were baptized, don’t worry about it. Very few ministers used the wrong formula. If without your knowledge you were incorrectly baptized, God will take care of it.

If you have serious reason to doubt your baptism, it’s easy to fix: Just get rebaptized. Any friend or family member can validly do it (though the Archdiocese of Detroit wants a priest to do it, and you should follow the instructions of your local bishop).

If you are worried about your marriage, talk to your local parish priest and do what he recommends. If necessary, you can be quietly remarried by a priest without a fuss. If you’re a priest who was invalidly baptized, go talk to your bishop. If you are a bishop, God help us all.

If you went to confession to a priest who was invalidly baptized and ordained, do not worry about it. God will take care of it. As the Archdiocese of Detroit told people:

The Church, following St. Thomas Aquinas, maintains that God has bound Himself to the sacraments, but He is not bound by the sacraments (cf. Catechism of the Catholic Church, 1257 and St. Thomas Aquinas, Summa theologiae III, q. 64 a. 7 and III q. 68 a. 2). This means that while we can have certainty that God always works through the sacraments when they are properly conferred by the minister, God is not bound by the sacraments in that He can and does extend His grace in a sovereign way. We can be assured that all those who approached Father Hood, in good faith, to make a confession did not walk away without some measure of grace and forgiveness from God.

The Archdiocese of Detroit has made the best of a bad situation, but the Congregation for the Doctrine of the Faith needs to pull this ruling. It was a mistake and a pastoral catastrophe. It would have been better to declare the formula illicit but valid.

The congregation also needs to change its way of making such decisions. Prior to issuing such an important decision, the congregation needs to announce that it is studying the question and ask for input from theologians and pastors from around the world, not just a small clique of Vatican and Roman university experts. Then, it should issue a proposed rule and ask for comments before issuing a final decision.

When the Vatican makes mistakes, it is often because it wants to project an image of being all-knowing and all-wise and therefore not in need of advice. By not getting input, the congregation made a mistake that hurt its credibility. By not practicing the synodality so ardently encouraged by Pope Francis, the congregation has thrown the church into chaos. The church should not act like a computer; it should act like Christ.