(RNS) — An Idaho church plans to reopen in person despite its pastor being hospitalized for COVID-19.

On Monday (Sept. 14), Candlelight Christian Fellowship in Coeur d’Alene posted a notice on the church website with an update on the condition of its pastor, Paul Van Noy, and his wife, Brenda. Both have been recovering from COVID-19.

As of Monday, Pastor Van Noy had spent 11 days in the ICU and was still on oxygen. His wife was recovering at home.

“I am watching in prayer that there are no new cases and we can all be back together — worshipping together as called — very soon,” Van Noy wrote in the update. “Please pray for health and strength for all. We are called to such a time as this — to represent the Lord!”

According to the Candlelight website, the congregation plans to hold two in-person services this coming Sunday. The church had been closed for two weeks and was deep cleaned in preparation for reopening. In addition to their pastor and his wife, five staff members were infected, a church leader told the Spokesman-Review newspaper in Spokane.

“We didn’t want, obviously, to be spreading the virus,” Eric Reade, a church leader, told the Spokesman-Review.

About 60 people from several churches gathered in a parking lot outside Kootenai Health last weekend to sing and pray for Van Noy’s recovery. The parking lot was visible from intensive care, according to the Coeur d’Alene Press.

We’re praying for a miracle,” Kari Schueler, one of the organizers, told the Press. 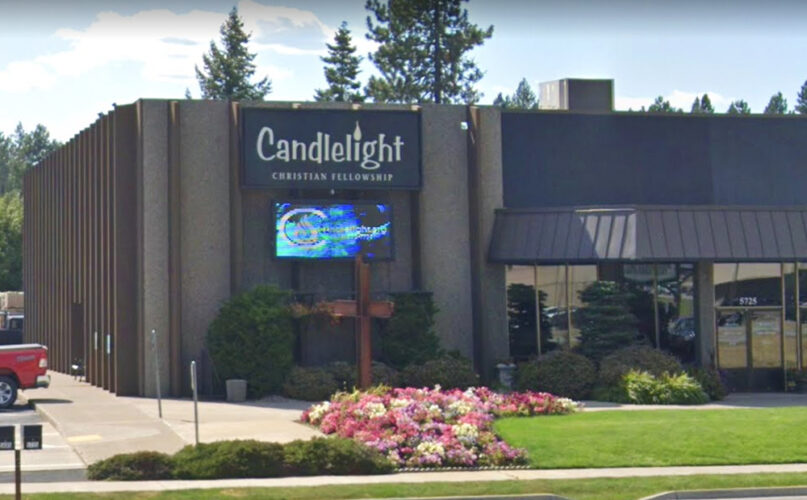 Van Noy has been critical of COVID-19 restrictions on churches in the past. In a July Facebook post, he claimed masks are not effective in preventing the spread of the disease and that he would not require churchgoers to wear them.

While he said the virus is real, Van Noy argued the threat had been overhyped.

“It is true that Covid-19 cases are in escalation here in our community and that the virus is real,” he wrote on Facebook. “However, the panic to ‘stop the world’ or mandate public compliance with less than free exercise is causing untold problems and pushback that will not be helpful.”

Brenda Van Noy did admit in a Facebook post that she had failed to take the coronavirus seriously, according to the Spokesman-Review. “I’m humbled,” she wrote in early September.

“Pray for healing. Love each other. Pray for those who have lost loved ones because of this EVIL virus!”

The church is one of a number of congregations suing the state of California, claiming restrictions on indoor worship are unconstitutional. McCoy told Religion News Service earlier this summer that church services should be considered essential.

“People needed this,” McCoy told RNS in August. “What they did was not an affront. They wanted the community to know that Christ is critical and essential and they wanted to testify that no matter what it would cost them, even if they were going to be berated and maligned.”

News
With rising COVID-19 cases inside the Vatican, pressure mounts for Francis to don a mask
News
‘Peeing pastor’ hunt comes to an end
News
Sean Feucht’s ‘finale’ worship protest on the National Mall included more politics than usual
News
North Carolina Pentecostal church ordered to close after coronavirus outbreak
News
Attorneys for John MacArthur denounce headlines reporting a church outbreak of COVID-19 cases
© Copyright 2020, Religion News Service. All rights reserved. Use of and/or registration on any portion of this site constitutes acceptance of our User Agreement and Privacy Policy, Privacy Statement and Cookie Notice. The material on this site may not be reproduced, distributed, transmitted, cached or otherwise used, except with the prior written permission of Religion News Service.