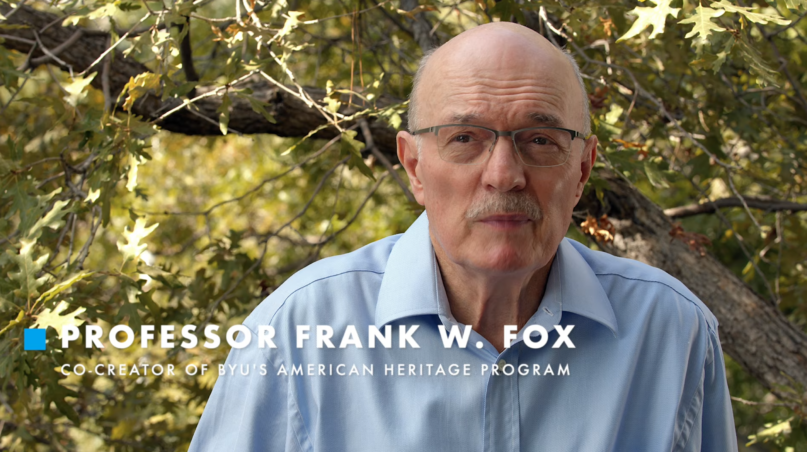 At 80 years old, Frank Fox says he’s not savvy about social media, but that hasn’t stopped the retired Brigham Young University history professor from using YouTube and Facebook to explain to his fellow Latter-day Saints why he’s voting against Donald Trump.

“Listen up, Cougars!” Fox says at the beginning of his video, which has been shared on Facebook more than 6,000 times and viewed more than 450,000 times. “2020 is why you took American Heritage.” American Heritage is the course Fox co-founded in the late 1970s for students at the church-owned university. Its goal is to teach students to appreciate the Constitution, revere the nation’s founding principles, and become informed citizens.

If anything, the course has been criticized in some quarters as having a conservative bias, so it’s surprising to find its co-creator advocating so publicly for Democratic candidate Joe Biden.

And indeed, Fox, who retired from teaching in 2006, identifies himself as a proud conservative. “Real conservatives are those who want to advance the principles and ideals of the founding of America in the first place,” he said in an interview with RNS. “Things like the rule of law, political responsibility, civic virtue and personal integrity. Those are the things that made the American experiment work.”

And those are emphatically not values he has seen demonstrated by Donald Trump or his administration.

In Fox’s video, called “An Open Letter,” he outlines five reasons why he thinks Trump is a threat to America’s democratic principles. He does not mince words:

Fox’s main video has been shared thousands of times by proud BYU alumni who in some cases are so fed up with the president’s chaos and narcissism that they are voting for a Democrat for the first time.

Most Latter-day Saints in America identify as Republican and have voted strongly for the GOP in past elections, though their support of Trump in 2016 was down by double digits from the votes they gave previous GOP candidates. In recent weeks there has been considerable discussion of whether there may be enough of a defection among LDS voters in battleground western states like Arizona and Nevada that it helps to turn those states blue.

But if there are fans of Fox’s outspoken denunciation of Trump within the LDS community, it has also ignited its share of outrage, including a deranged-sounding rejoinder from a Trump fanatic who believes the president has been ordained by God. (I’m not going to dignify it here with a link, but it’s available on YouTube.)

Fox is saddened and worried about the stark polarization he sees among his Mormon people. In our interview he discussed a recent conversation with a neighbor in Provo, Utah, who informed him that the second coming was nigh. “The end of times has come, and Donald Trump has been selected by God to take Jesus by the hand and lead him down from the cloud,” the neighbor said.

Fox hoped this was a joke but soon realized the neighbor was “deadly serious.” Some version of that over-the-top sacred devotion to Trump “resonates with more than a few of my neighbors,” he said.

Taking a stand has caused him to lose friends in his conservative religious community – people who don’t understand how he, as a fellow conservative and a pro-life advocate, could cast a vote for Biden. To answer that, Fox has posted a special short video just about the abortion question, but he wonders how many fellow conservatives will listen if they have already  “bought into the myth of Donald Trump.” By criticizing Trump so openly, Fox is “a little bit like the kid poking a stick into a hornet’s nest. Sure enough, out come hornets.”

But he hopes that positive things will come out of his decision to take a stand, even if he loses some friends in the process. “If I can actually do some good, I will be justified in all of this,” he said. “I hope it helps Mormons to understand who and what Donald Trump really is.”

More than half of U.S. Mormons approve of Trump—but not among women