WASHINGTON (RNS) — Since the moment Judge Amy Coney Barrett was announced as President Donald Trump’s nominee to fill the Supreme Court seat left vacant by the death of Justice Ruth Bader Ginsburg, debate has swirled around how Barrett’s Catholic faith might affect how she would rule on various issues — especially abortion.

But some scholars and legal observers say that when it comes to questions of religion and politics, Barrett’s appearance on the court may have an outsized impact on a broader faith-related portion of U.S. policy: religious liberty.

Elizabeth Reiner Platt, director of The Law, Rights and Religion Project at Columbia Law School, said there are “certainly” indications that Barrett will push the court toward a narrow understanding of religious liberty, one that is being espoused by conservative Christian legal groups.

Barrett has ties to the Alliance Defending Freedom, an organization that fought against same-sex marriage for years and in 2018 was part of the legal team that won the Supreme Court case for the owner of Colorado’s Masterpiece Cakeshop, who had refused to bake a cake for a same-sex couple for religious reasons. (ADF is listed as a hate group by the Southern Poverty Law Center, a characterization ADF disputes.) 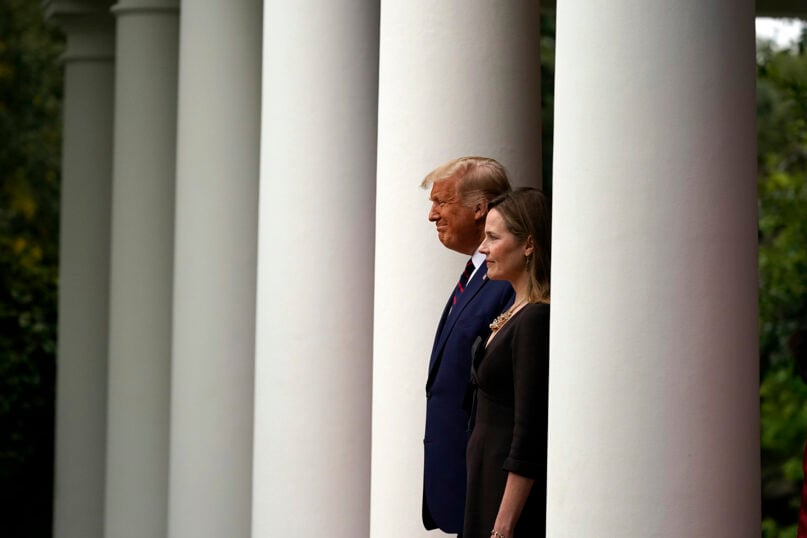 President Donald Trump walks with Judge Amy Coney Barrett to a news conference to announce Barrett as his nominee to the Supreme Court, in the Rose Garden at the White House, on Sept. 26, 2020, in Washington. (AP Photo/Alex Brandon)

ADF’s legal strategy in religious freedom cases often revolves around preserving a specific understanding of the U.S. Constitution’s establishment clause, which stipulates that Congress “shall make no law respecting an establishment of religion.”

Platt pointed to an amicus brief filed by ADF in Trump v. Hawaii, a landmark 2018 Supreme Court case in which justices issued a 5-4 ruling upholding Trump’s travel ban — which activists derided as a “Muslim ban.” The plaintiffs had claimed that the ban on refugees and immigrants from a group of primarily Muslim-majority countries violated the establishment clause.

ADF’s brief technically did not take a side in the case but implored the court not to rule by invoking the establishment clause, arguing for a “historical understanding” of the statute that deals primarily with “establish(ing) a state religion or faith.”

“Arguing for such a radically limited reading of the Establishment Clause would allow the government to openly prefer religion over irreligion, and even Christianity over other religions so long as this preference doesn’t amount to an official state religion,” Platt said in an email.

RELATED: Amy Coney Barrett and the American wars of religion

The moderate and liberal justices tend to read the establishment clause differently, as something that, as Platt put it, “require(s) that the government treat all beliefs about religion with neutrality and to refrain from endorsing religion overall, or any particular religion.”

Arguably an even more stringent take on the establishment clause cropped up in a concurring opinion written by Justice Clarence Thomas and joined by Justice Neil Gorsuch in June, when the court ruled 5-4 that a scholarship program in Montana that uses public funds cannot discriminate against religious schools. 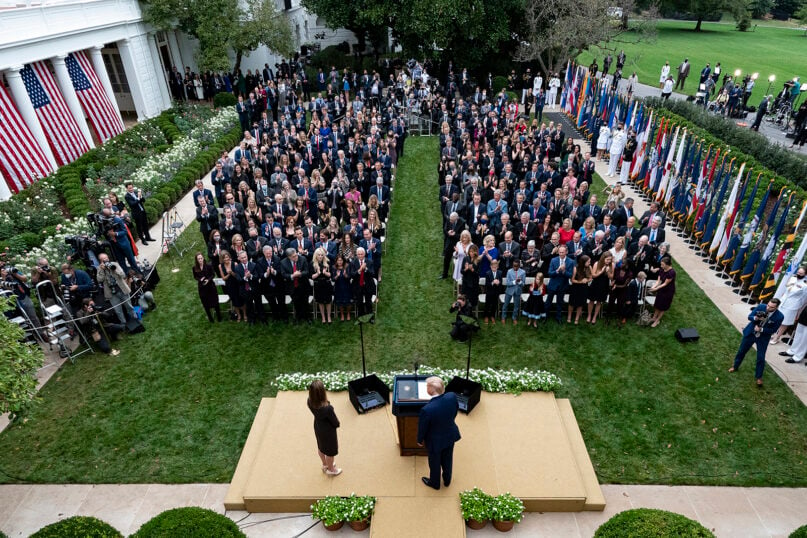 In this Sept. 26, 2020, photo, President Donald Trump, center, stands with Judge Amy Coney Barrett as they arrive for a news conference to announce Barrett as his nominee to the Supreme Court, in the Rose Garden at the White House in Washington. (AP Photo/Alex Brandon)

Views of the establishment clause and broader understandings of religious liberty have real-world implications. Scholars pointed to cases such as the craft giant Hobby Lobby’s successful campaign against the Affordable Care Act, which ended in a 2014 Supreme Court decision granting a religious exemption to the company from the ACA’s mandate for employers to provide contraception in their insurance plans.

Putting Barrett on the bench, Platt said, could perpetuate this trend of invoking religious liberty as “a de-regulatory force” allowing individuals and corporations to opt out of laws by invoking faith.

It could also lead to re-evaluating past rulings. In October, Thomas published a statement regarding the court’s decision not to hear a case involving Kim Davis, a Kentucky clerk who refused to issue marriage licenses to same-sex couples on religious grounds. In Thomas’ statement — which was also signed by Justice Samuel Alito — he argued that the Supreme Court decision legalizing same-sex marriage nationwide “privilege(d) a novel constitutional right over the religious liberty interests explicitly protected in the First Amendment, and by doing so undemocratically, the Court has created a problem that only it can fix.”

It’s not clear whether Barrett will agree with Thomas, Gorsuch and others entirely. But there is some evidence that Barrett may be open to their views. In a 2019 talk at the University of Notre Dame, she was asked by a student whether she agreed that states can support “religion, in general, above nonreligion,” a position the student attributed to Barrett’s mentor, the late Justice Antonin Scalia.

Barrett told the student she hadn’t done enough research on the topic and was careful to qualify her remarks by noting that as an “originalist” scholar she would have to do “the historical work” to determine how such concepts apply to any particular circumstance.

But she argued that there is “plenty of evidence” in early American history to back the idea of privileging religion.

Another possible hint came during her confirmation hearings, when Texas Sen. John Cornyn brought up the establishment clause. Barrett responded by recounting an exchange from her job interview with Scalia, for whom she clerked from 1998 to 1999. She said Scalia had asked her what area of Supreme Court precedent she thought needed to be “better organized.”

Barrett said she replied by launching into a discussion of the First Amendment, particularly “how one might see one’s way through the thicket of balancing the establishment clause against the free exercise clause” — the constitutional prohibition against inhibiting religious practice. 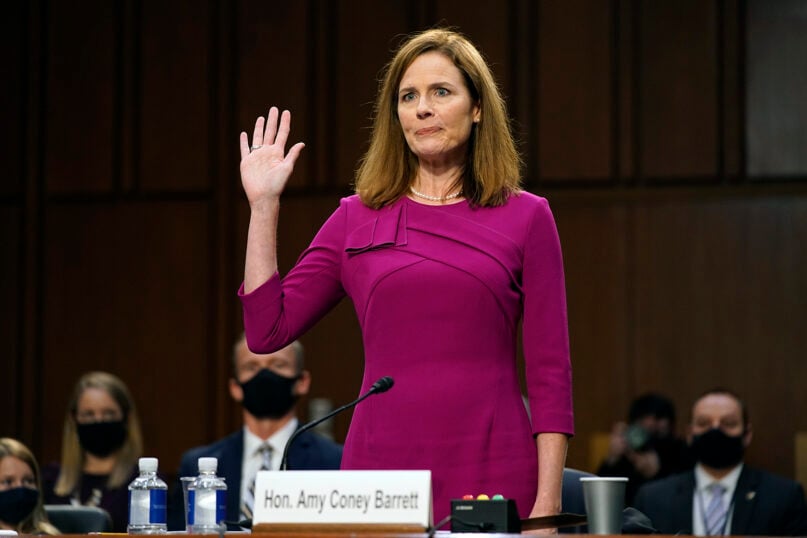 Supreme Court nominee Amy Coney Barrett is sworn in during a confirmation hearing before the Senate Judiciary Committee on Oct. 12, 2020, on Capitol Hill in Washington. (AP Photo/Patrick Semansky, Pool)

Barrett did not stipulate exactly how she would balance the two clauses, but Micah Schwartzman, a professor at the University of Virginia School of Law, pointed to a recent decision in Barrett’s 7th Circuit Court concerning the size of religious gatherings during the pandemic.

Barrett ultimately ended up joining the decision against the Republican Party, agreeing with the governor that speech “that accompanies religious exercise has a privileged position under the First Amendment.”

Schwartzman said the decision is part of a broader phenomenon of courts weighing religious speech more favorably than political speech — a shift he finds “quite disturbing.”

What court watchers don’t know is how far Barrett is willing to go to “organize” the court’s views on religious freedom. Another line of argument recently expressed by Thomas holds that the establishment clause only applies to the federal government, and leaves the states free to give religious beliefs a wide legal berth.

Barrett discussed this argument in her response to the student at Notre Dame, saying, “When you look at the fact that many states at the time did have established religions — you know, it says ‘Congress shall establish no religion,’” she said. To Barrett, that strengthened Thomas’ position — that the establishment clause “was designed to leave the states free to establish religions and not have Congress override that.”

What’s certain is that the promise of Barrett’s historical approach — even if it doesn’t perfectly resemble that of Thomas or others — will encourage advocates such as Luke Goodrich, an attorney at the conservative legal group Becket Fund. Barrett has at least one tie to his group: In 2012, she signed a letter written by Becket that objected to the Affordable Care Act’s guarantee that health insurance plans cover contraceptives. The letter referred the law’s existing religious exemption as a “so-called ‘accommodation’” that “changes nothing of moral substance and fails to remove the assault on religious liberty and the rights of conscience which gave rise to the controversy.”

Goodrich said Becket has long encouraged the court to reexamine the establishment clause, citing an understanding of the statute that echoed ideas Barrett discussed in her Notre Dame talk.

“We … have been arguing that the court should revisit its establishment clause jurisprudence, and seek to interpret the First Amendment in light of historical meanings,” he said. “Establishment of religion had a well understood meaning at the time of the founding, because nine of the 13 colonies had established churches.”