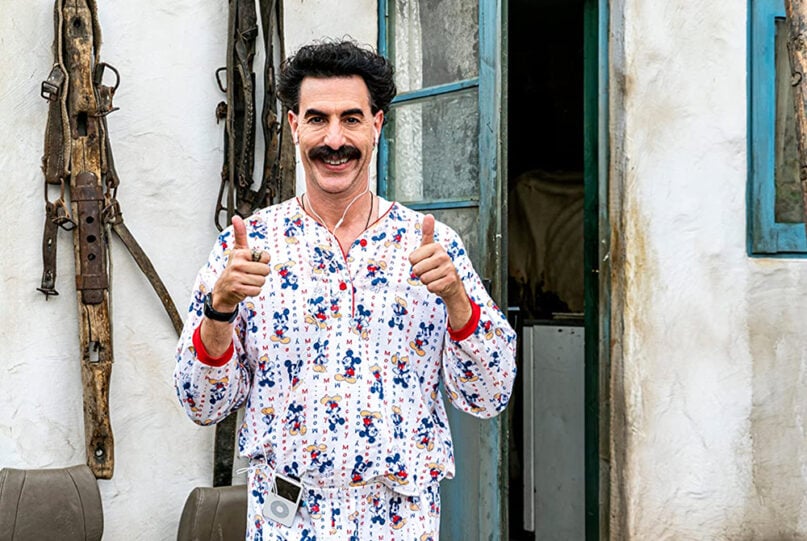 I am talking, of course, about “Borat Subsequent Moviefilm,” the new comic extravaganza by Sacha Baron Cohen. (Warning: spoiler alerts.)

Unless you have been living in a cave (then again, haven’t we all, in a way?), you know that Sacha is a comic genius, and that “Borat” is the story of a fictional journalist from Kazakhstan who passes himself off as a real one, in the service of a documentary-style film that spoofs American culture, particularly our politics.

You probably also know that Borat speaks Hebrew throughout the film, thanks to Sacha’s fluency in the language. You also know that the film is filled with Boratian pranks against all sorts of people, including, infamously, Rudy Giuliani.

Many of you will find the film puerile, gross and hysterically funny — often simultaneously.

My point here is to show that “Borat Subsequent Moviefilm”  is not a comedy.

It is a serious film.

Its topic: how easily “ordinary” people can be seduced into various forms of hatred, especially anti-Semitism.

What scenes am I describing?

Two men welcome Borat into their rural home, and introduce him to various right-wing conspiracy theories (including a mangled version of QAnon). They write a song together.

Borat, in disguise, crashes a right-wing rally in Olympia, Washington. He goes to the stage to perform the bigoted bluegrass song, with references to Hillary Clinton, Dr. Anthony Fauci, Bill Gates and the World Health Organization, the “Wuhan flu,” and the desire that we “chop them up like the Saudis do.”

There were cheers. And yes, there were also boos, which might provide a ray of hope. Some things are beyond the tolerance of even the ultraright. 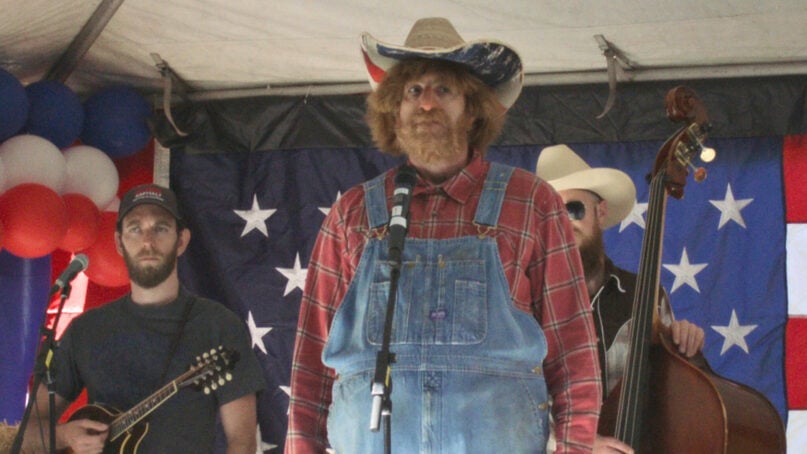 Borat, in disguise, performs at a March for Our Rights rally in “Borat Subsequent Moviefilm.” Image courtesy of Amazon Studios

But, it gets worse.

The scene where Borat takes his daughter, Tutar, for rhinoplasty — bracketing, for a moment, the perverse version of misogyny that the film is satirizing. (In fact, the doctor lets on that if circumstances were different, he might be interested in acquiring the daughter.)

“What’s wrong with my nose? Do I look like a Jew?” Tutar asks. No, the surgeon reassures her, but then goes on to mime the shape and size of the “Jewish” nose.

Why is that worse?

Because this man is a doctor! Isn’t he supposed to be more educated, more compassionate, more understanding than the “rubes” at the rally?

Yes — until you remember Robert Jay Lifton’s research into Nazi doctors. You then remember how easy it was for smart people — especially smart people — to put aside their previous or assumed moral commitments, and march into the horror.

But the scene that has haunted me is the one where Borat goes into a bakery to get a cake. He asks the clerk to inscribe “Jews will not replace us” in icing on the cake.

Which the clerk does. Adding several smiley faces.

Without blinking an eye. Without registering a word of protest. Without refusing to do so. Without even questioning him.

That is what Hannah Arendt was describing when she wrote about the “banality of evil.”

That is what Raul Hilberg described when he wrote about the willful bystanders in Nazi Germany.

That clerk in the bakery — not the right-wingers at the rally, not even the anti-Semitic surgeon — is the most frightening person in the film.

Because in a consumer economy, the customer is always right.

Is there anything in the film that gives me hope?

Yes. Because just as evil is seductive, so, too, is goodness. 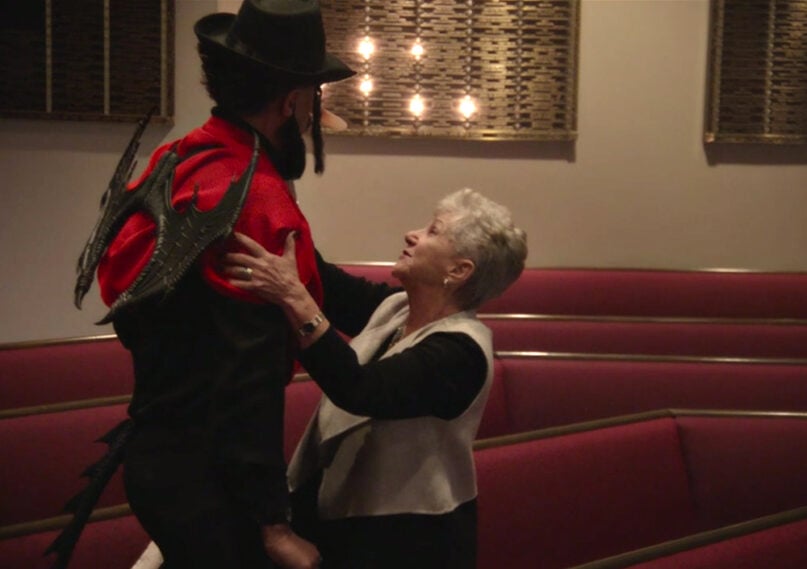 I am referring to the scene where Borat, dressed as an anti-Semitic stereotype, seeks refuge in a synagogue. He meets a group of elderly women, one of whom, Judith Dim Evans, a Holocaust survivor, tells him that the Holocaust was not a hoax, that she witnessed it with her own two eyes.

Evans was a real hero. She served as a teenager in Israel’s pre-state defense force; became the youngest school principal in Israel and lost her first husband in Israel’s Six-Day War. She died this past summer.

At one point, Evans embraces Borat — lampoonish disguise and all — and offers him comfort. She gives him a hug and kiss, and then counters his invented Judeophobia: “You see, I give you a kiss and you are still alive.”

For his part, Sacha departed from his usual practice and let Evans in on the joke right after the filming of that scene.

But, that scene shows something very powerful. SBC is dressed like a cartoon out of Der Sturmer. He spouts anti-Semitic cliches (“Nice weather we’re controlling”). The women, especially Evans, had every reason to go ballistic on him. Frankly, I would have.

And yet, how did they respond to him?

With kindness, emotional generosity and hospitality.

Forget, for a moment, about the banality of evil.

There is also a banality of goodness.

Sacha dedicated the film to the memory of Evans.

If anything, that should show you who he is, and what he intended this film to be.

Nothing short of a wake-up call.

Because of the woman in the bakery. She is out there. She is real.

And she and her ilk cannot be the future of this country.