(RNS) — Do you have a profound sense of dread about what wickedness may be coming our way in early November?

If not, you only need listen to what a significant number of your neighbors are worried about in the next couple of weeks. There’s talk of postelection violence — bands of Trump-supporting, gun-toting white supremacists attacking statehouses and assassinating political leaders.

On the other side, the fears concern antifa-like mobs pulling random people out of their vehicles and torching suburban homes or a federal government turned fascist. On Friday (Oct. 23), a Louisiana congressman tweeted to alert his followers of his wife’s intuition: “Last night she dreamed that Federal squads were in our home seizing guns, knives, ‘unauthorized foods’ and stored water,” he wrote.

A few seem resigned to there being substantial violence no matter the outcome.

Hunkered down for what the Democratic candidate warns will be “a dark winter,” it can become easy to obsess over these matters, fueled as our obsessions are by social media that delivers every bit of bad news to us in something close to real time. Billions of dollars are being spent to support the best students of human nature so that natural political divisions are turned to hatred and malice against our neighbors.

Both of these commandments push back directly and strongly against a consumerist, disposable culture designed to keep us anxious, frothy, despairing and disconnected from the neighbors as the Lord identified them in the parable of the good Samaritan.

I had a Zoom call yesterday with a friend and colleague I envy in this regard. Her life was so full of service and concern for her family, friends, colleagues and literal neighbors that, she said, “The election just seems to be just one more entry on my list of things to be concerned about.”

This is as it should be. Christians should not downplay the importance of the election, but nor should we allow it to have the power to disconnect us from the far more important concern (and fundamental duty) we have when it comes to neighborly love.

We will not be judged by how we voted in this election, but rather on whether we allowed Christ’s face in the least among us to move us to visit prisoners, feed the hungry, clothe the naked and welcome the stranger. 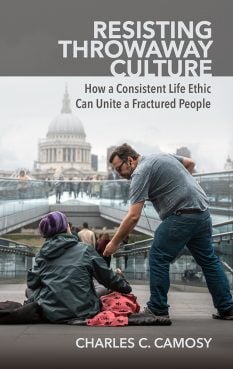 This means, as I argue in my recent book, “Resisting Throwaway Culture,” doing deliberate, countercultural work in our own lives to contribute to the creation of a culture of encounter and hospitality. A culture in which we become busy (even obsessed!) with the needs of the other, especially our vulnerable neighbor, in a personal, embodied context.

This kind of culture will become especially important to build as the pandemic trails off in the next few months (we hope) and as we reckon with what kind of people we want to be in its aftermath.

Or will we resist the trends of the pandemic with intention, moving to confront and be confronted with the reality of our neighbors? Will we, like the good Samaritan, refuse to cross to the other side of the street and instead make the needs of the other who lies in our path our needs as well?

It may be that the time to decide is now. The election will be over shortly, and before we know it we will all be lining up for a vaccine. If we allow it to, however, our throwaway culture will continue to push us in familiarly toxic directions.

If we decide instead to commit to change our lives now, if we decide to live in ways that create the conditions for the possibility of whatever comes next, we will open ourselves to a culture that chooses encounter over division and hospitality over fear.