(RNS) — Asked how a Biden-Harris administration would work with faith leaders, Sen. Kamala Harris, the Democratic Party nominee for vice president, highlighted the campaign’s proposal to establish a “faith-based law enforcement program” in the Department of Justice to help protect faith communities from hate crimes.

In an email interview facilitated by the Biden-Harris faith director, Josh Dickson, the candidate talked about her Baptist upbringing and the influence her faith has had on her policymaking. Harris repeated some of her signature lines about her personal faith, including a quote from the New Testament’s Second Letter to the Corinthians (“We walk by faith and not by sight”) that she cited in her acceptance speech at this summer’s Democratic National Convention.

As to policy, while the DOJ plan is not new, her championing of the idea shows how Harris, a former prosecutor and attorney general of California, thinks about the government’s role in protecting people of faith and ensuring religious freedom.

The freedoms of religious minorities is a question that, curiously perhaps for the daughter of a Hindu and an immigrant, has troubled Harris on the campaign trail. While serving as attorney general in 2011, Harris argued to bar a Sikh from being hired as a California state corrections officer because she believed his beard would compromise his wearing a gas mask. Sikh activists have demanded that Harris apologize.

But even some who are troubled, including Religion News Service columnist Simran Jeet Singh, a Sikh, believe that the senator’s multifaith background, and her firsthand understanding of racial difference in America, makes her a natural ally of minorities of all kinds.

The interview has been edited slightly for clarity.

At the vice presidential debate, you said “Joe Biden and I are both people of faith.” Tell us more about your own faith journey.

My faith journey started when I was a little girl. On Sundays, my mother would dress my sister, Maya, and me in our Sunday best and send us off to the 23rd Avenue Church of God in Oakland, California, where Maya and I sang in the children’s choir. That’s where I formed some of my earliest memories of the Bible’s teachings. It’s where I learned that “faith” is a verb, and that we must live it, and show it, in action.

My mother, an immigrant from India, instilled the same idea in me on trips to Hindu temples. And I’ve also seen it reflected in the Jewish traditions and celebrations I now share with my husband, Doug. From all of these traditions and teachings, I’ve learned that faith is not only something we express in church and prayerful reflection, but also in the way we live our lives, do our work and pursue our respective callings. You’ve served as a district attorney for San Francisco, as California’s attorney general and now as a U.S. senator. How does your faith inform your approach to leadership?

The God I have always believed in is a loving God, a God who asks us to serve others and speak up for others, especially those who are not wealthy or powerful and cannot speak up for themselves. I can trace my belief in the importance of public service back to learning the parable of the good Samaritan and other biblical teachings about looking out for our neighbors — and understanding that our neighbors aren’t just those who live in our ZIP code, but include the stranger, too.

Over the course of my career, I’ve always tried to be an advocate for the voiceless and vulnerable, whether it was survivors of sexual assault or California homeowners defrauded by big banks. And some of the leaders I’ve always looked up to most, from Constance Baker Motley to Thurgood Marshall to Ella Baker, have understood that you often need a deep faith to see what can be unburdened by what has been.

What role do you see for faith-based organizations and houses of worship in a Biden-Harris administration?

Joe and I are committed to partnering with faith leaders, congregations and faith-based organizations to strengthen and build on the critical work they are doing to support their communities in the wake of this pandemic.

Throughout our careers, we have both worked with faith-based organizations in the pursuit of increased opportunity, justice and peace, and we will continue to do so in a Biden-Harris administration.

And we will not only partner with faith-based organizations and faith communities, we will safeguard them. Over the past four years, we have witnessed a rise in anti-Semitic incidents even as Christian, Muslim and Sikh communities have also been targeted in acts of domestic terrorism. 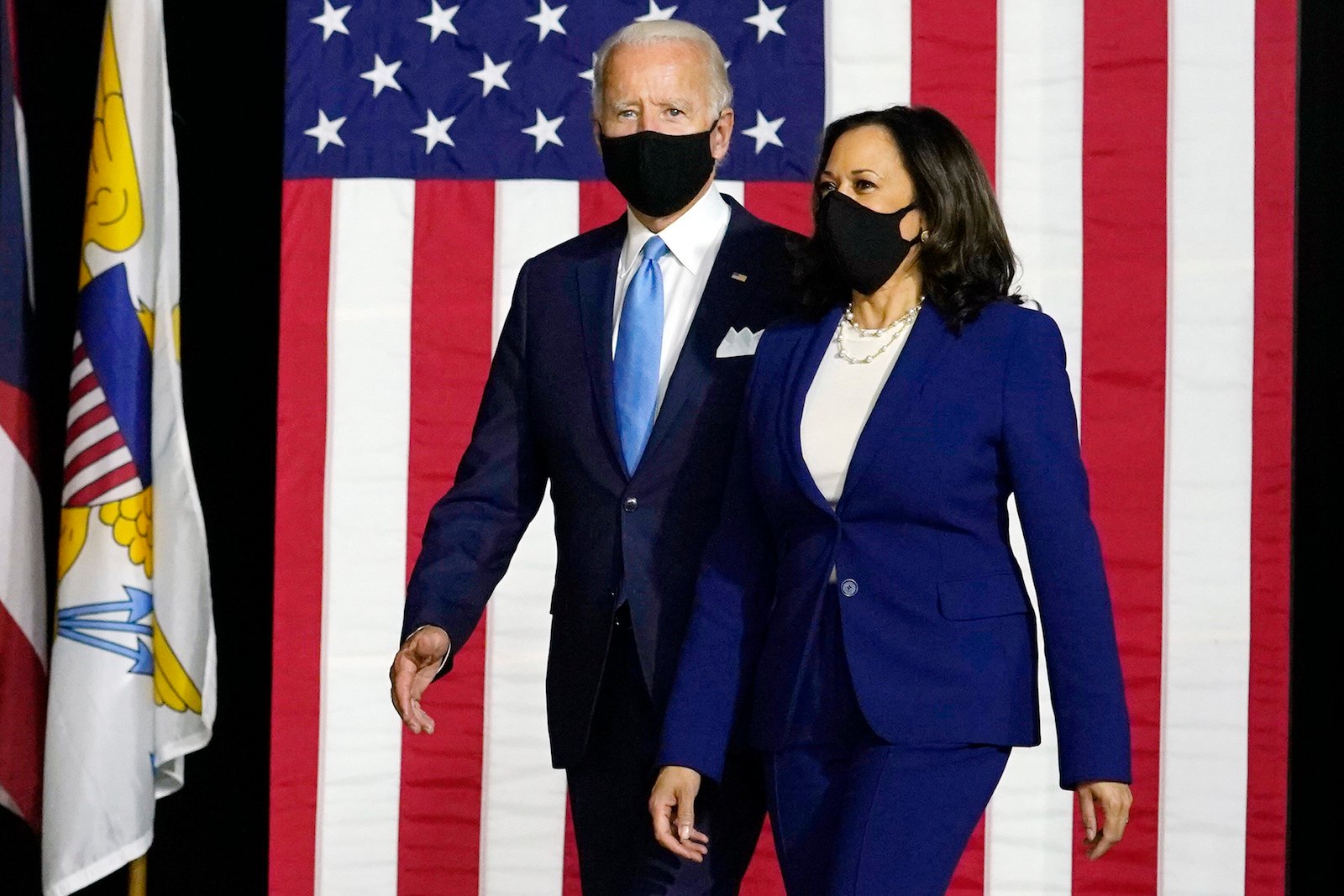 When Joe and I are in the White House, we will help protect these communities by providing increased security grants to religious communities, establishing a Faith Based Law Enforcement program in the Department of Justice, and strengthening prosecution of hate crimes.

Religious freedom and tolerance have been core principles of this country since our founding, and Joe and I will uphold and protect them — while protecting believers of all faiths.

You’ve said you are a regular church attender. What do you enjoy about going to church?

Ever since I was a girl, church has not only been a place where I draw strength, it’s been a place for reflection, a place to study the teachings of the Lord and to feel grounded in a complex world. Church still plays that role for me. And I also draw something else from it as well: a sense of community and belonging where we can build lasting relationships and be there for one another in times of need.

What is your favorite Bible verse?

“We walk by faith and not by sight,” from the Second Letter to the Corinthians. It’s a reminder that God will see us through to the other side of whatever challenge we’re facing so long as we do the work and hold onto our faith. Like many people of faith, I have private conversations with God where I usually ask for the strength and protection to make good decisions and do the right thing.