(RNS) — In the long election week just passed, Americans obsessed over a half-dozen states whose razor-thin margins between Democratic and Republican votes were the keys to the U.S. presidency.

In those same states those small differences meant that communities that are not typically considered politically influential had an outsized power to swing the balance.

A majority of the credit for this swing has gone to Black voters — and rightfully so. But there are many groups that have made significant gains in their ability to deliver the vote in 2020, perhaps the most influential of which is the Muslim American bloc.

We can see a similar picture when we look at Muslim voter turnout. In 2016, an estimated 400,000 Muslim Americans voted in the presidential election. In 2018, that number is believed to have doubled to approximately 800,000 Muslim voters.

According to an NPR poll, 64% of Muslim voters supported Biden nationally, while 35% backed Trump.

These numbers are staggering in their own right, but they are especially consequential in that large proportions of these numbers come from Michigan, Pennsylvania, Arizona, Georgia, Ohio, North Carolina and other swing states.

The magnitude of the Muslim vote is perhaps most noticeable in Michigan, where an estimated 80,000 Muslim Americans voted via mail-in ballot alone. In 2016, Hillary Clinton lost to Donald Trump in Michigan by 11,000 votes. This year, Joe Biden took Michigan handily, gaining nearly 150,000 more votes than Trump.

Building community power does not happen overnight. An important part of the story here is an organization called Emgage, a Muslim advocacy group that has been around since 2008 but was catalyzed in 2016 following Trump’s election. According to its CEO, Wa’el Alzayat, the Muslim community’s feeling of being under siege by its own government moved the organization to activate the Muslim electorate.

“It wasn’t just enough just to be here. We wanted our people to show up. We wanted to drill down on election as part of a culture that happens every year,” said Alzayat. “We wanted people in our community to get into the practice of being involved and feeling like their voice matters.”

For the past three years, Emgage has been expanding and professionalizing its operations, increasing its impact each year. It began by organizing Get Out the Vote campaigns in key states, and as its footprint grew, it established brick-and-mortar offices with staff and organizers.

The group’s strategy is informed by data collection and by mulching the information it gathers about local populations and trends, while adding its own working knowledge of local, state and federal electoral laws. This information drives its voter outreach efforts: voter registrations, phone-banking, canvassing and digital strategies.

The organization’s Million Muslim Votes campaign, launched in 2019, brought together a network of partners, spreading this information to leverage it as widely as possible. The collaboration yielded more than 1.8 million phone calls and 3.6 million text messages to Muslim Americans around the country.

The process of political organizing is not glamorous, but it is in keeping with democratic ideals and in fact reinforces and strengthens them. Let’s hope that Muslims and all other marginalized communities continue to work to be heard so that all Americans will find equal footing in shaping our collective future.

This story has been corrected. An earlier version stated that an estimated 80,000 Muslim Americans had voted in Michigan; this is an estimate for mailed ballots only. 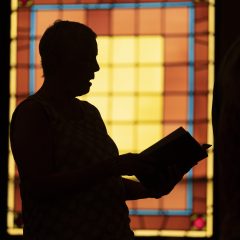 News
Millions skipped church during pandemic. Will they return?