(RNS) — On the last Sunday of October, the Rev. Karl Anderson helped arrange a “Souls to the Polls” event on a blocked-off downtown street to encourage Alachua County, Florida, residents to do their civic duty ahead of Election Day.

There were candidate speeches at the bipartisan gathering, free hot dogs and hamburgers courtesy of the NAACP, with music provided by live gospel singers. Between speeches and music, clergy prayed. Some participants, wary of the coronavirus, watched from a distance in the “park and praise section.”

But the location was the main attraction.

“It was on the back street of Alachua County Supervisor of Elections office,” said Anderson, the pastor of a Church of God in Christ congregation, who also runs a marketing business in Gainesville. “All they had to do was walk over there. We had a total of 423 voters that day.”

Black voters were already ramped up to participate in the 2020 election due to warnings about voter suppression as well as the recent killings of unarmed Black people. But faith leaders said that unprecedented coordination of their get-out-the-vote efforts, such as Anderson’s, were also key to higher rates of participation and greater enthusiasm among voters. 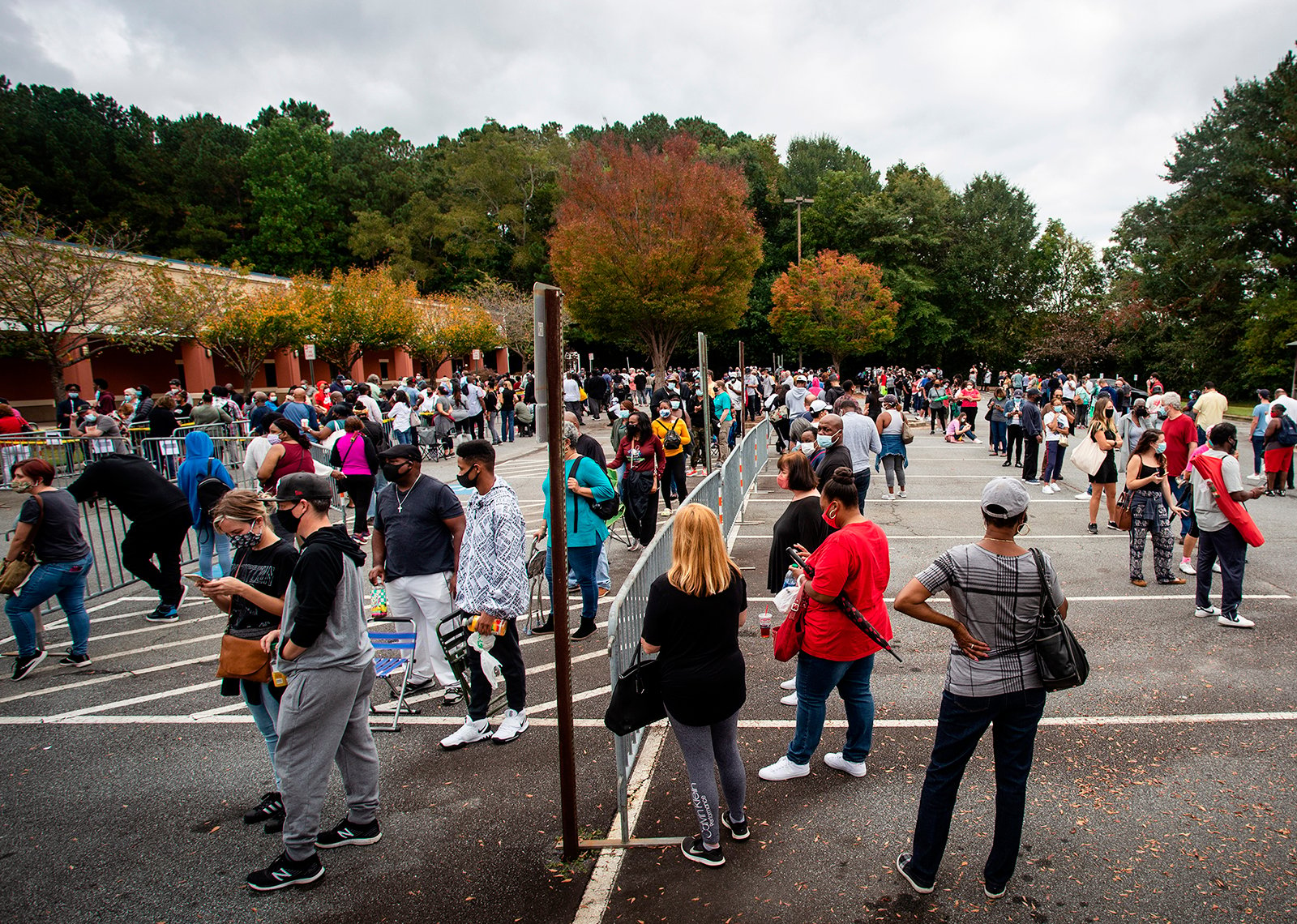 Tens of thousands of people heard from them on Facebook, Instagram and YouTube in addition to traditional methods such as phone banks. Video messages sent by denominational leaders went viral.

Pastor Mike McBride, a Pentecostal minister based in California, worked with faith-based campaigns including Live Free, a campaign of the multifaith and nonpartisan Faith in Action, and the Black Church PAC, which backed Joe Biden.

McBride said church groups used “every tool we had in our belt,” from a 14-city Southern bus tour to a “Black Church Rocks” virtual concert featuring gospel music celebrities. Field teams knocked on tens of thousands of doors in Georgia and Florida. 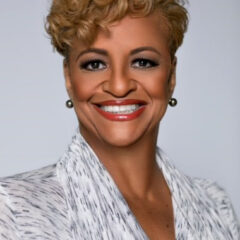 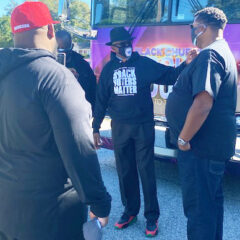 The Conference of National Black Churches partnered with the Rev. Al Sharpton and his National Action Network for the Black Church 75 initiative, which aimed to register at least 75% of the membership of 1,000 churches affiliated with the group.

The group matched church rolls with voter registration information so ministers could see who among their flocks had yet to get involved.

They exceeded their goal, registering 84% of member churches in eight states, with about a third of those in Georgia, a key battleground where Biden won a close presidential race and the Rev. Raphael Warnock got the highest number of votes in a special nonpartisan Senate primary.

But the work is not complete, said Jacqui Burton, the conference’s president. Like Georgia’s other Senate race, Warnock’s is headed for a runoff. “We want to get out the vote for the runoff,” Burton said, expressing hopes for “a large turnout” in Georgia. 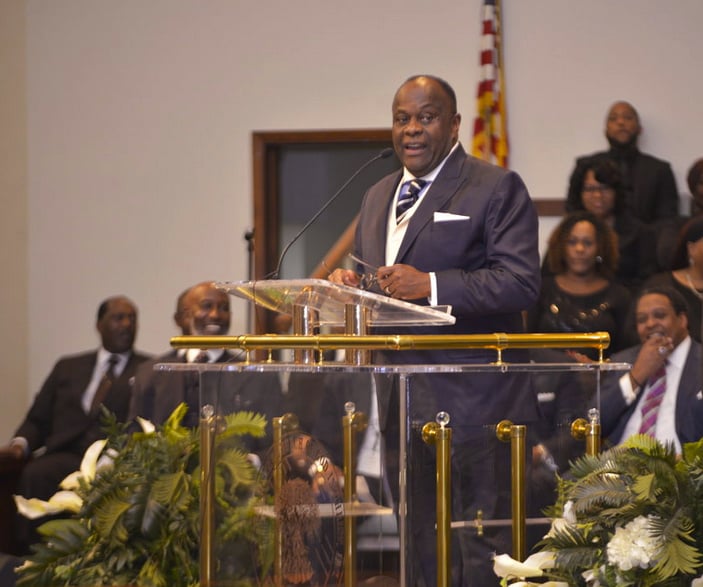 Race played a large role in many of the contests that determined the election, especially in the wake of this summer’s marches and the Black Lives Matter movement’s prominence in the news. Black voters, who tended to look favorably on the BLM movement, voted in huge majorities for Biden, while Trump voters, pointed out Robert P. Jones of Public Religion Research Institute, took an opposite view on those issues.

But faith also played a role in some local ballot issues, according to Andrea Marta, executive director of Faith in Action Fund, which mobilized for “policies that empower Black, Brown and poor Americans.” The group pointed to passage of a $15 minimum wage in Florida and creation of a Citizens Police Oversight Commission and the elimination of “unconstitutional stop and frisk” policies in Philadelphia. 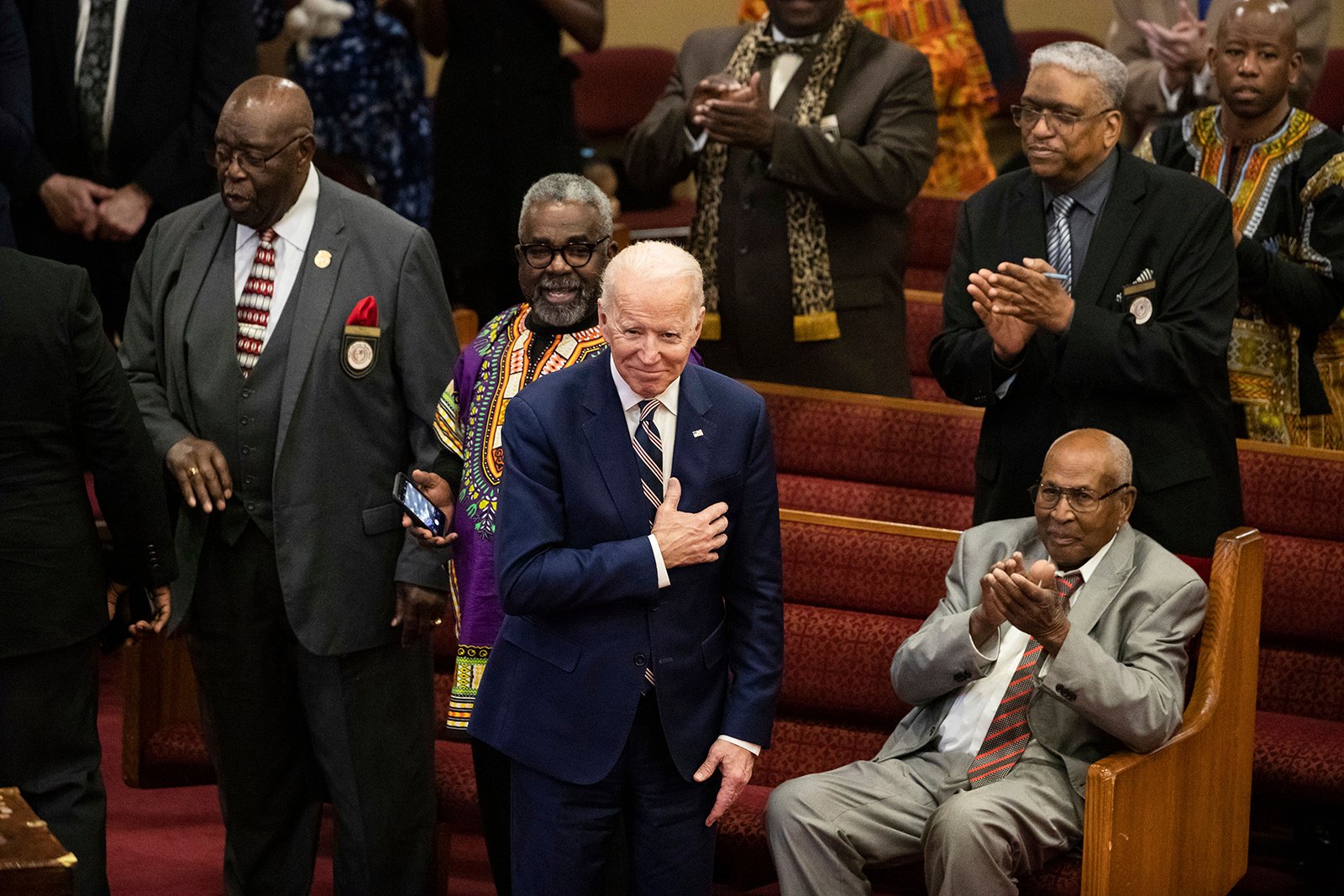 The Rev. Keon Gerow, a Black pastor in Philadelphia, served as a poll chaplain with the “Lawyers and Collars” program, which supplied legal experts and clergy as observers and peacekeepers to voting locations in nine states. He was impressed with the sheer number of voters as well as the enthusiasm of mostly Black millennials as they left polling places.

“I was shocked to see the number of individuals between the ages of 21 and 40 who were coming out to the polls — with their friends as well — who were very engaged and extremely informed as to why they were voting and some of the issues that mattered most to them,” he said.

“One of the biggest issues was police brutality and racial injustice in America right now,” said Gerow, founder of Catalyst Church, a predominantly Black church in an area of southwest Philadelphia with high crime and poverty rates. He said many Black voters he spoke with “attributed their understanding of those salient issues to the role of the Black Church,” including via social media posts, sermon mentions and church announcements.

In Georgia, Christy Davis Jackson, state supervisor of the AME Church’s Women’s Missionary Society, said the shooting death of Ahmaud Arbery at the hands of alleged vigilantes galvanized people of faith to highlight the reelection bid of Brunswick Judicial Circuit District Attorney Jackie Johnson, whose handling of the case was called into question. 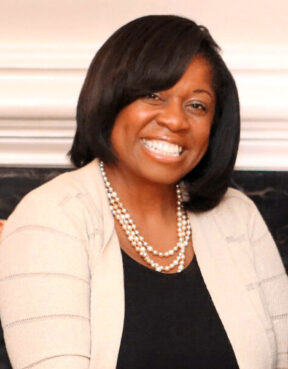 “They were so passionate that social justice needed to be centerpiece in that campaign,” Jackson said of the volunteers. Johnson was unseated by Keith Higgins, an independent candidate.

In California, support from Black church members and Black Lives Matter activists was instrumental in the adoption of Measure J in Los Angeles County, which mandates that 10% of the county’s unrestricted revenue — reportedly as much as $360 million to $900 million — be used for mental health services and housing resources instead of law enforcement and incarceration, according to the AME’s Dupont-Walker.

“That’s going to take money away from detention and parole and probation,” she said, calling the measure “extremely, extremely critical for us.”

For many, the heroine of the 2020 vote is Stacey Abrams, whose loss in the 2018 gubernatorial election in Georgia spurred her to found Fair Fight, a voter protection movement. Along with leaders such as the Rev. Traci Blackmon and Pastor Leah Daughtry, founding members of the Black Church PAC, Abrams inspired many, including Black women like her, to new levels of activism.

The Christian activists acknowledge that there were limits to what churches could accomplish. “I think we have to be able to do a better job of reaching the broader community of the African American community, not just church people,” said the Rev. W. Franklyn Richardson, chairman of the National Action Network and the Conference of National Black Churches.

Another goal is to influence not just the vote but the new administrations they helped elect.

“Bad governance is de facto voter suppression,” said McBride. “We’re going to have to hold everybody accountable, including Joe Biden and Kamala Harris.”

Anderson, the Florida pastor who staged the Souls to the Polls event, said, “The Bible says that the government should be upon his shoulders and we are those shoulders,” referring to the Book of Isaiah.