(RNS) — For some time now, we’ve heard talk about an American “Catholic moment.” As far back as 2012, David Gibson, director of the Center on Religion and Culture at Jesuit Fordham University (and a former Religion News Service staffer), highlighted some astonishing facts about Catholics in public life.

Six of nine Supreme Court justices when Gibson wrote were Catholic. The current and previous speakers of the House at the time were practicing Catholics. Both vice presidential candidates going into the 2012 race (Joe Biden and Paul Ryan) were strong in their Catholic identity.

For a country founded in the midst of virulent anti-Catholicism and where Catholics imagine their own “penitential outsider status,” in Gibson’s words, this was a jolting set of facts.

In a matter of days, that same Catholic speaker of the House will look on as the Catholic former vice president is inaugurated the second Catholic president of the United States. Depending on how one is scoring at home (Justice Neil Gorsuch’s relationship with Catholicism is apparently complex) seven Supreme Court justices are or have been Catholic.

Even more important than the high-profile leaders who identify as Catholic is how the ideological commitments of the church play out in the culture. In 2012, a debate over Catholic social teaching was in full swing between the progressive “Nuns on the Bus” and conservative Catholics such as Ryan and Florida Sen. Marco Rubio, who came of political age with small-government Republicanism.

Cleavage between Catholics of differing political stripes still exists, but it has been complicated by America’s political realignment, which many believe began in 2012.

Despite approval ratings similar to President Donald Trump’s, then-President Barack Obama beat GOP nominee Mitt Romney soundly that year, leaving Republicans disbelieving and deflated. With hindsight, the loss had more to do with Romney’s stiff aristocrat mien. Rather than connect with the working class, he had dismissed them as “the 47 percent” who are so dependent on government payouts that they are a lock for Democrats.

The populism wave that elected Trump exposed Romney’s miscalculation. Having had time to process it, Washington Post columnist Eugene Robinson took the measure of the shift. “My view is that the traditional left-to-right, progressive-to-conservative, Democratic-to-Republican political axis that we’re all so familiar with is no longer a valid schematic of American political opinion,” he said. “And I believe neither party has the foggiest idea what the new diagram looks like.”

Three years later, we now have much more detail to work with. Examining the 2020 election results with respect to race and ethnicity, we see that educated and wealthy whites in the suburbs moved toward Biden while Blacks and Hispanics in the cities edged toward Trump. David Shor, a Democratic pollster, suggested Democrats have been pulled so far left by “college educated white people” that working-class folks have turned against them.

We knew this time around that working-class voters tend to be significantly more religious and socially conservative than affluent whites. The new surprise was that this group is more diverse than we thought, and includes communities of color. The shift away from the Democratic Party also seems to have been underway for longer than we appreciated.

This has been a balm for Trump’s loss among those, like Rubio, who were excited about the possibilities that lay ahead for the party. Since the election he has been touting the GOP as the “multiethnic, multiracial, working-class” party of the future. 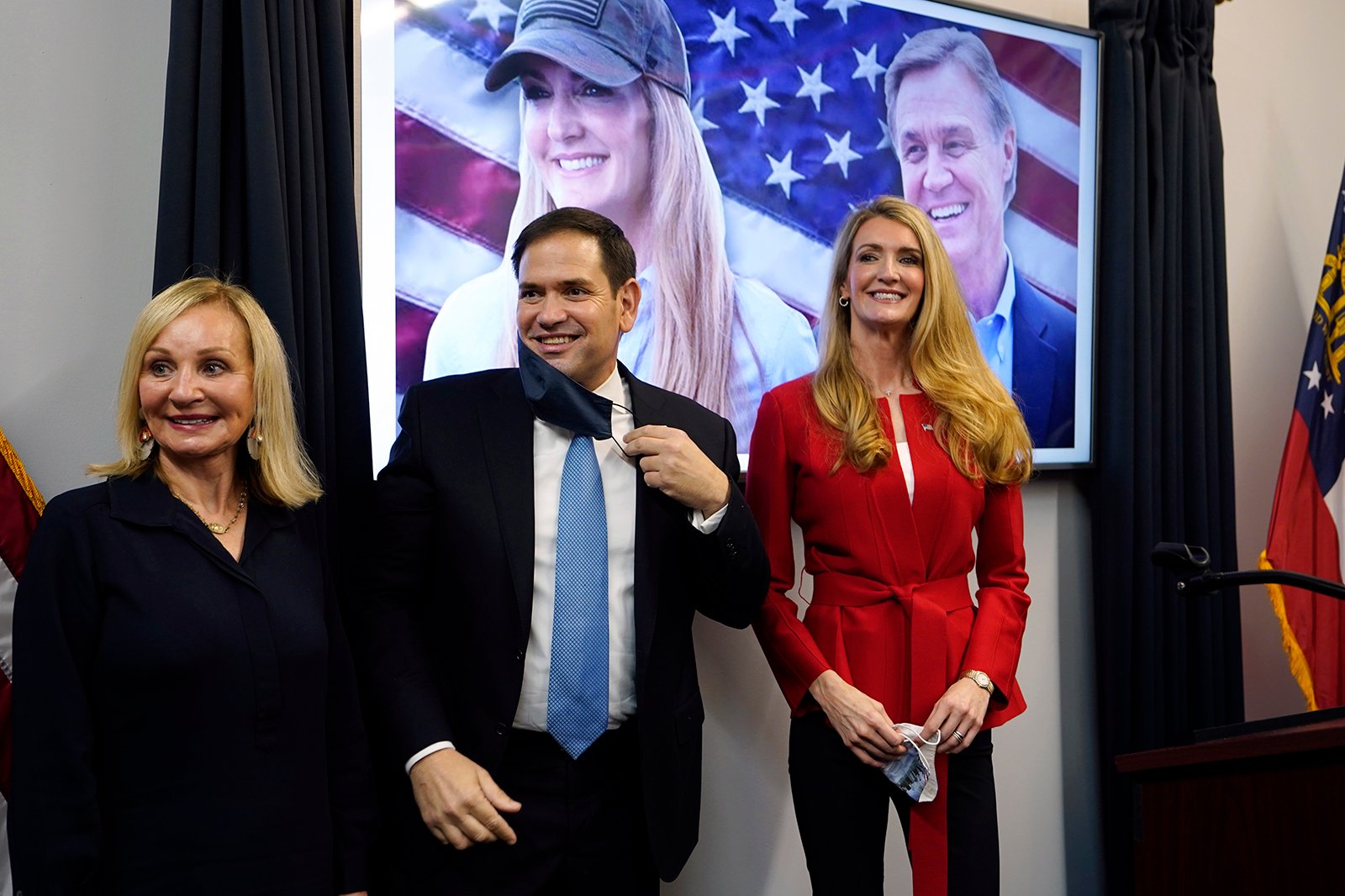 This might look something like Fox News host Tucker Carlson’s populist vision, fiercely anti-socialist, but also very much against rampant capitalism and corporatism. Carlson is a powerful advocate for faith, family and pro-life issues, whose unceasing focus on labor and the working class moves him to encourage government to protect the jobs of truck drivers while calling out the left for not permitting workers to unionize.

This new kind of political alignment may be difficult to imagine, but as I expressed in my column last year, we must inform our two-dimensional “red vs. blue” thinking. Imagine a political grid whose x axis goes right to left on economic issues while the y axis graphs social issues. The Democracy Fund’s voter study group found in 2016 that nearly 1 in 4 voters placed themselves in the upper left quadrant — call them “the ULQs”: economically progressive but socially conservative.

Given that there is currently no political or major media home base for folks in this camp, it is astonishing, even strange, that 25% already identify with it. But it is not a strange political space.

Indeed, it is nothing more than what the Catholic Church’s social and moral vision has been asking for: support for unions, a living wage and a right to health care; skepticism of corporatism and unfettered capitalism while condemning socialism; broad opposition to abortion and euthanasia, while insisting on support for vulnerable women, the elderly and sick; ecological and racial justice; vouchers for religious schools; opposition to war and support for restorative justice; and deep commitment to extended families and local communities through a culture of encounter and hospitality.

Is this something that a new GOP — one focused on religious working classes who are an interesting mix of social conservativism and economic progressivism — could pull off? Skepticism is in order, not least because there is a hangover in current leadership from the small-government-and-corporate-fan-service era.

But Carlson is by no means the only standard-bearer for this new political option. New York Times columnist Ross Douthat, a deeply committed and orthodox Catholic, has warmed to social support for women and families, especially for vulnerable women at risk for abortion.

Sohrab Ahmari, an outspoken convert to Catholicism from Marxist atheism, has emerged with a very significant platform from which to resist progressives on social issues and conservatives on economics. University of Notre Dame political scientist Patrick Deneen has developed an important argument that U.S.-style autonomous individualism must be demythologized on both the left and the right.

The power of Catholic moral theological vision can be substantial and nuanced. Even Paul Ryan was forced to wrestle with his church’s teaching on economics, and though he never got it quite right, it did replace his early commitment to Ayn Rand.

Rubio is perhaps the most important bellwether. Signaling his doubts about libertarian economics, he gave a significant lecture at the Catholic University of America in 2019 titled “Catholic Social Doctrine and the Dignity of Work.” He’s gone further than Ryan, taking small but significant steps in the direction of providing paid family leave for new parents. He fought for increased child tax credits in the GOP’s 2017 tax law. His Cares Act bill gave stimulus checks to families with noncitizens.

There are real, if subtle signs that the GOP’s values are changing in tangible ways. Another small battle of the 2017 tax law was the fight to restore the adoption tax credit, in which the pro-life movement was able to defeat its libertarian Republican opponents. Recently the National Review’s Jim Geraghty went on Jonah Goldberg’s podcast to support increases to the minimum wage. Trump’s appeal to raise the most recent stimulus payout from $600 to $2,000 per person gained the support of many Republicans.

Sens. David Perdue and Kelly Loeffler, who both appear to have lost their Georgia Senate runoff races this week, are holdovers from the corporate-friendly and elitist GOP. Predictably, they couldn’t capitalize on the gains Trump made with working-class people of color in Atlanta, instead thinking somehow it was a good idea to attack the Black church.

Should the party decide to realign around a religious, multiethnic, working-class populism — and it should — the new movement will require an ideological foundation. If 2012 was the year Catholics had come to dominate the highest levels of U.S. public life, 2021 may be the year when the highest levels of public life finally made space for the fullness of a Catholic vision.