AMMAN, Jordan (RNS) — Long-simmering suspicions between Orthodox and evangelical Christians have blown up recently over the refusal of the Jordanian government to allow evangelical churches full legal standing under the country’s religiously divided judicial system.

In a Jan. 26 letter to the country’s Judicial Council, Greek Orthodox Archbishop Christophoros Atallah attacked members of local evangelical churches, calling them “a danger” to society.

“There are great dangers from the teachings and ideas that are disseminated by these groups that are being spread within the Christian society,” the archbishop wrote. “These are strange ideas that depart from our Christian faith and the national identity of the local church.”

In addition, Atallah said, “these groups are funded from abroad and have outside and unclear agendas and we have reservations about them.”

In Jordan, the legal system is divided into civil courts, where commercial and criminal cases are heard, and separate religious courts that settle matters of marriage, divorce and child custody according to canon law for the majority-Muslim population and for the 11 recognized Christian communities.

While United Pentecostal and Jehovah’s Witnesses members are allowed their own ecclesiastical courts, legal matters for members of nearly 60 other Protestant churches are heard in civil court, or, for minor matters, work through the court of the Anglican Church, one of the 11 approved denominations.

But on Feb. 5, in response to Atallah’s letter, Judge Mohammad Al Ghazo, who heads Jordan’s Judicial Council, issued a memo disqualifying any Christian without an approved ecclesiastical court from using the civilian courts. Cases would instead be referred to the Council of Church Leaders, a government advisory body.

Legal scholars have said that this request is in direct violation of a 2014 law that updated the religious court system.

“Those clauses state clearly that the regular courts are the ones that are obliged to deal with cases brought to it by Christians who have no ecclesiastic court so long as it rules with fairness and justice and in accordance with the beliefs of these denominations,” Tagrid Doughmi, a lawyer and author of a study on Jordan’s religious groups, told Religion News Service.

Repeated requests for comment from the Jordanian government went unanswered.

The Rev. David Rihani, head of the Assemblies of God denomination in Jordan, told RNS that the government action is an attempt to negate decades of work: “Evangelical churches have existed since the establishment of Jordan, and their marriage certificates and other personal status documents have been and continue to be accepted and registered within the official government records for decades.”

In 2006, the Jordan Evangelical Council was established with the aim of unifying the approximately 10,000 Christians now scattered among the Baptist Evangelical Church, Assemblies of God, the Evangelical Free Church, the Church of the Nazarene and the Christian and Missionary Alliance Church under a single hierarchy. 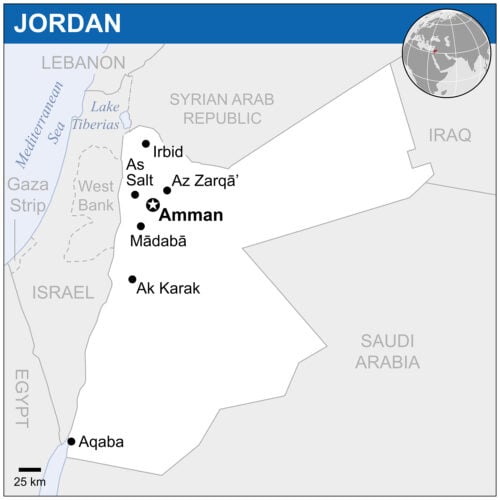 Amman is located in the northwestern corner of Jordan. Map by the UN Office for the Coordination of Humanitarian Affairs (OCHA)/Creative Commons

According to the Rev. Habes Nimat, president of the Jordan Evangelical Council, leaders of the unrecognized churches met almost a year ago with Prince Ghazi bin Muhammad, a member of King Abdullah’s cabinet known for his interest in religious affairs, seeking clarification of their status, but no progress has been made since then, despite following the prince’s recommendations.

Nimat said that the bid to deny evangelicals access to civilian courts put at risk thousands of Christian families whose marriages were properly licensed at an evangelical church but could now be declared void.

Audeh Quawas, a member of the Jordanian Senate and an Orthodox Christian, told RNS that the archbishop is attempting to avoid the unnecessary proliferation of small ecclesiastical courts.

“What the archbishop did was not against any specific church but in order to avoid duplication,” said Quawas.

The solution, the senator said, is to bring all the Christian groups together to rationalize the court system. “We should solve this problem as Christians by means of a religious and social dialogue,” he said, “with an eye to having the Orthodox, Eastern Orthodox, Catholic and Protestant churches with equal representation.” 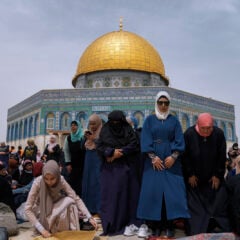 News
Patriarch of Jerusalem’s edict puts unity on Holy Land’s Christmas in doubt
Follow us on Facebook!
Submit your photos to RNS