(RNS) — Yudhanjaya Wijeratne was tired of worrying about the future.

A Sri Lankan data scientist and author, Wijeratne spends much of his time writing about the megatrends that will affect Asia and the Pacific and the challenges the region faces.

He’s also seen too many stories about evil robots and rogue AIs — digital beings, or “artificial intellects,” who have become self-aware — trying to take over the world. So Wijeratne decided to write a story in a far future where humans and AIs work together in deep space.

The result: “The Salvage Crew,” a novel that is part cracking adventure, part mystery and part first contact story — all narrated by Amber Rose, an AI who practices Buddhism. Between writing poetry and worrying about karma, Amber tries to protect a team of misfits from aliens and themselves.

Published in late October, the audio version of the novel — read by actor Nathan Fillion — has become one of the most listened to fictional stories on Audible.com.

Wijeratne wrote a computer program to create simulations of weather systems on his imaginary planet of Urmagon Beta, and another that spit out potential plot points. He then used a real-life AI machine poet (one with its own Instagram account) to generate poems and spun a story around them.

His technique drew on “apophenia,” which he described as the human ability to see patterns in random events and spin stories out of data. 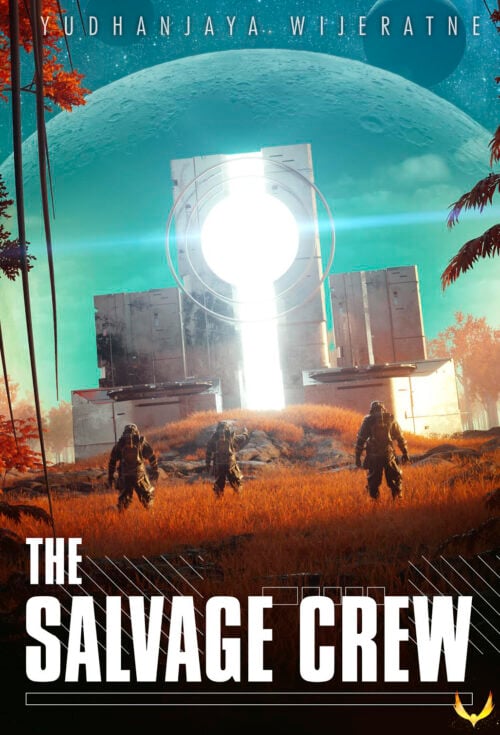 The Salvage Crew by Yudhanjaya Wijeratne. Courtesy of Wijeratne

“I was like a spider in the middle of the web, being fed algorithmically generated flies,” Wijeratne told Religion News Service in an email interview. “The rest of it seeped through in the process of turning this noise into a signal, and I had a hell of a lot of fun in the process.”

The mystery of the book was inspired by a question the philosopher Ludwig Wittgenstein once asked about the nature of language. If a lion could speak, the philosopher once asked, would we be able to understand what it said?

He applied that quote to attempts by humans to communicate with aliens.

“What if we were Wittgenstein’s lion?” Wijeratne asked. “What if the language we chose to speak — rockets, satellites, radio signals, mathematics — were infinitely boring to someone else out there, who was profoundly unimpressed?”

But mostly, it’s a good story. Amber Rose is an Overseer — O.C. for short — who works for the Planetary Crusade Services, an intergalactic company that salvages resources from crashed spaceships and abandoned space stations. The AI was once human but agreed to let the company turn him into a software program.

“You are a Nyogi Buddhist,” Amber Rose recalls company officials saying. “Think of it as rebirth.”

Being an AI, however, isn’t all it is cracked up to be. Amber Rose still has all the same worries they had as a human — too much to do, too little time or money to get the job done. And all the worries that come along with being a leader.

“Turns out the old adage about not being able to choose your next life applies even when you are software,” Amber Rose says.

RELATED: Mormons in space: Sci-fi or no lie?

Amber Rose — all the AIs in the book are named after flowers — is chided by other AIs for not leaving behind human worries and a craving for the company of others.  The AI’s dilemma reflects one of Buddhism’s four “noble truths,”  that all craving leads to suffering and that the end of suffering comes after craving is abandoned.

Wijeratne summed it up this way: “As we are the ultimate cause of our difficulties, we are also the solution. We cannot change the things that happen to us, but we can change our responses.”

The author said he has left behind what he called “the militant Buddhism of my childhood” and embraced a more personal interpretation of Buddha’s teaching, one mostly detached from organized religion and rituals.

In the novel, Buddhism shows up both in major themes and in the minutiae of life. When one of the crew members becomes deathly ill, Amber Rose wonders what they did in a past life that led to this fate. And the Buddhist idea of karma shapes how characters respond to the events around them, including Amber Rose’s attempts to deal with life’s insecurities.

James McGrath, professor of religion at Butler University, said Buddhism has often been used as a model for “good religion” in science fiction franchises such as “Star Trek” and “Star Wars.” Both the Vulcans in “Star Trek” and the Jedi in “Star Wars,” he said, exhibited a kind of detached spirituality that downplayed emotions and material attachments.

McGrath said that science fiction took off in the U.S. in the 1950s and 1960s, when there was growing disenchantment with Christianity and organized religion. So creators such as Gene Roddenberry of “Star Trek” either avoided religion or painted it in a negative light, preferring a more humanist approach.

Spirituality inspired by Buddhism was an exception. 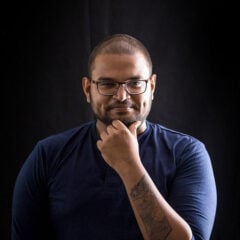 “Buddhism has often been a source that could be drawn on for alien religion or religions that could be viewed positively in a speculative future,” he said.

Buddhism, he said, does raise some interesting questions for science fiction. Could a human being be reincarnated as a smart machine — such as a driverless car or other robotic devices? Could an AI create art or poetry? And will AIs eventually pass humans by?

“There will probably be this brief period, where AIs go from being these pale replicas of human existence to being very similar to humans. Then they will be gurus or gods, who are able to understand things and do things we can’t do. If they are benevolent — which we hope they will be, if we do a good job of childrearing — they will share some of that wisdom with us before they leave us behind. They will outgrow us.”

Kathy Wesley, a resident teacher at the Karma Thegsum Choling Meditation Center in Columbus, Ohio, and a sci-fi fan, said Buddhist themes have long been woven into science fiction stories.

“Buddhism and science fiction are friends who were made for each other,” she said.

A Catholic school graduate who converted to Buddhism in her 20s, Wesley said she read “Lord of the Rings” in junior high and has been hooked on tales of imaginary worlds since.

Like McGrath, Wesley sees Buddhist themes in the original “Star Trek” series, both in the Vulcan religion of Mr. Spock and in Roddenberry’s vision of the future. She sees a connection between Buddhist values and the imaginary universe that Roddenberry created, where people of different species and backgrounds were all connected.

Wesley is also a fan of the British television series “Doctor Who,” especially the seventh incarnation of the character, played by actor Sylvester McCoy, whom she once interviewed in her previous career as a journalist. (She also once interviewed Ursula Le Guin, a legendary science fiction author whose books included Buddhist themes.)

Now in her 60s, Wesley finds that her religious duties keep her too busy to watch “Doctor Who” “religiously,” she said, but she remains a fan. She calls Doctor Who, who has lived a number of lives, “a bodhisattva figure,” someone whose existence is devoted to “running around the universe and helping people.”

“When you are enlightened,” she said, “you become a servant of everyone else.”

Writing “The Salvage Crew” also allowed Wijerante to express his lifelong love of poetry, which plays a key and at times surprising role as the novel unfolds.

His own spiritual journey is a work in progress, much like the main character of the novel.

“I certainly am not enlightened and I certainly have my attachments; most of this is learning to live with a few desires and leave out all the rest.”