(RNS) — In Senegal, Christian relief staffers worked with Sunday school and Quran teachers to reduce stigmas about COVID-19 as they distributed masks.

In Oklahoma City, residents picked up free food boxes at a church that later became a vaccination clinic to inoculate against the coronavirus.

In the Democratic Republic of Congo, faith leaders demonstrated getting their temperatures taken in front of their congregations to model best practices for avoiding virus spread.

Across the country and the globe, World Vision is continuing a multi-pronged effort to meet the needs of people facing the health crisis and the secondary effects of the COVID-19 pandemic. Globally, the crisis that began more than a year ago has claimed 2.89 million lives.

RELATED: World Vision US president says ‘all hands on deck’ for pandemic 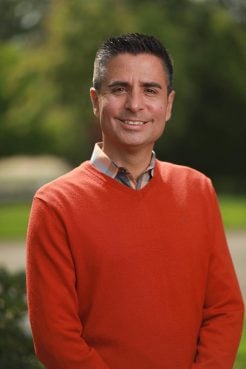 Worldwide, the relief and development organization has provided COVID-19 preventative materials such as soap and clean water to close to 15 million people, with the assistance of more than 128,000 faith leaders.

In the U.S., World Vision has long responded to natural disasters like fires and hurricanes, but its pandemic-driven provision of domestic supplies — from food to personal protective equipment — is unprecedented for the humanitarian organization.

U.S. staffers have worked across the country, “coming alongside the Navajo Nation, rural areas in Appalachia, urban centers in New York,” Sandoval said. “The common thread has been supporting our church partners.”

By March, he said, the evangelical relief agency had distributed fresh food boxes to feed more than 9 million people in the U.S. It has also sent more than 1.5 million units of protective equipment, such as masks and hand sanitizer, to schools often attended by low-income students.

In the developing world, World Vision’s emphasis is on aiding faith leaders to encourage social distancing practices, counter misinformation and urge acceptance of the vaccine when it is available. 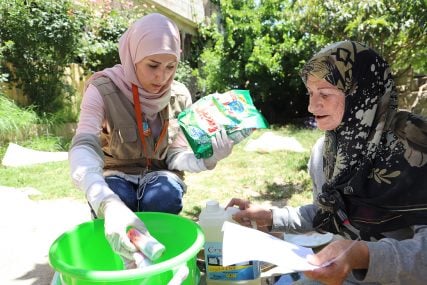 World Vision in Lebanon team distributing disinfectant kits to vulnerable Lebanese families in Bint Jbeil and Marjayioun (South of Lebanon), to slow the spread of the virus. Photo courtesy of World Vision

“What the pastors and faith leaders say carries a lot of weight,” said Sandoval.

He cited findings in a recent World Vision report in Bangladesh that showed every responder who planned to get the COVID-19 vaccine “said that was the case because their religious leaders wanted them to get the vaccine.”

Beyond building awareness about preventing and eradicating COVID-19 and seeking equitable access and distribution of the vaccine, World Vision has been advocating for populations facing what Sandoval calls the “perfect storm” of the pandemic’s health consequences combined with economic losses and climate change.

“There is a tremendous secondary effect,” he said. “Because of the lockdown, because of the social distancing, because the world has come to a halt, there’s a real threat that 30 years of progress in our fight against extreme poverty could be reversed.”

His organization said on April 1 that more than 7 million people in six East African countries are at risk of starvation.

Sandoval said World Vision staffers are also trying to address misinformation and hesitancy about the vaccine.

“In Tanzania, for instance, we’ve heard from our team there are concerns the vaccine could lead to impotence,” he said of staffers who are seeking to correct such false claims. 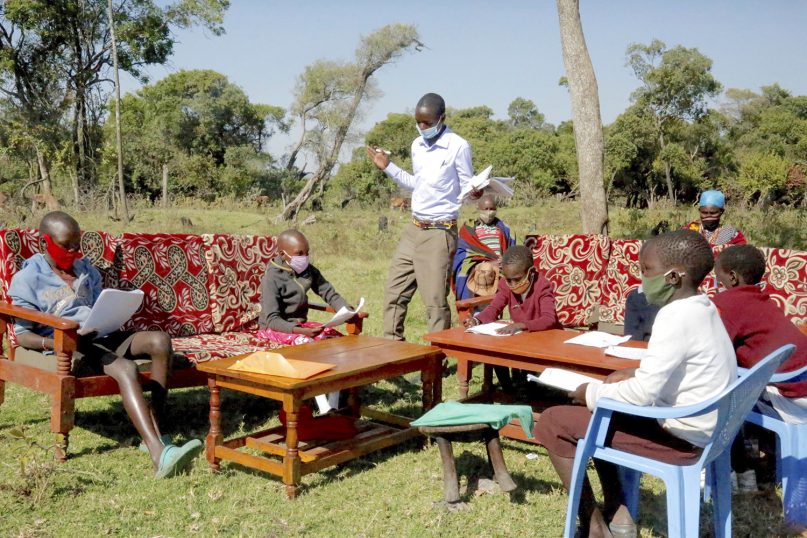 Children learning from their home with the assistance of a trained teacher (called Ezekiel) in Kirindon, Narok County, Kenya. Photo courtesy of World Vision

Public health officials have said there is no evidence the COVID-19 vaccines lead to erectile dysfunction.

World Vision staffers have begun leading two-day, eight-hour training sessions to provide scientific information to faith leaders about vaccines and guidance on sharing it with their communities.

Olivia Wilkinson, director of research at the Joint Learning Initiative on Faith and Local Communities, spoke in March about a two-page “quick analysis guide” faith leaders and health and development officials created after working with World Vision and other organizations.

Among the questions in the guide is one asking if religious buildings owned or operated by a faith leader can be used as vaccination sites. It also asks what is driving hesitancy about the vaccine.

“We thought that people need to analyze their context and not just receive generic advice,” said Wilkinson at a webinar hosted by Georgetown’s Berkley Center for Religion, Peace & World Affairs.

“All research and evidence we’ve seen has shown that we should not isolate or essentialize the religious aspect as the only part that’s driving a hesitancy or resistance,” she said, noting questions are also asked about political, social and cultural factors.

Just as World Vision is working on building trust before vaccine rollouts in some parts of the developing world, a similar scenario has played out in the U.S. 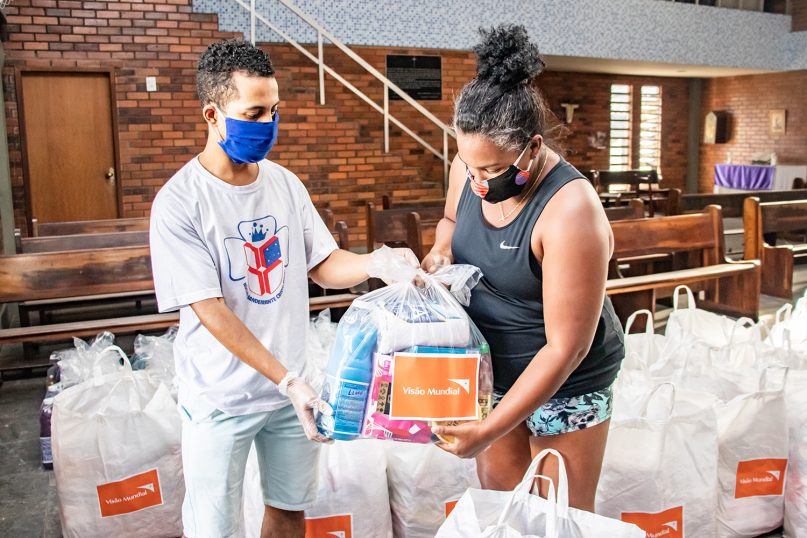 Since March, a partnership signed between World Vision Brazil and XP Inc. has reached thousands of families across Brazil in an attempt to mitigate the financial impacts of COVID-19. Initially, the partnership envisaged reaching 14,700 families over three months, with the distribution of one basic food basket per month. Nevertheless, with efficiency in the management of resources, it was possible to include another 9,100 families in a single extra delivery, which began to take place in the last week of June. In Rio de Janeiro, 2,400 families were supported with basic baskets for three months. Photo courtesy of World Vision

Pastor Derrick Scobey of Oklahoma City said his teaming up with World Vision to meet other community needs paved the way for greater vaccine acceptance. His Ebenezer Baptist Church became a COVID-19 vaccination site in January, primarily inoculating Black people in his community when at the time the state reported just 2 to 3% of African Americans in the state overall had received the vaccine.

In the previous year, his church had received food boxes from World Vision to distribute to the community.

“When World Vision started to send all of these different items to us, we’ve had people 2½ miles lined up down the road,” Scobey said in January.

Once people knew they could trust the pastor and his church with supplies, they believed him about the vaccine, too, despite their recollections of medical mistreatment and experimentation on African American patients. Especially once he had gotten the vaccine himself.

Scobey said he heard over and over again at the clinic: “He took the vaccine so I’m going to go.”